Another algo-induced stop-run has tried and failed to maintain its gains this morning as Morgan Stanley becomes the latest (after Goldman) to join the “oil in the $20s is possible” bandwagon. Despite hopeful bullishness from Andy Hall who sees production destruction leading (an industry that couldn’t function at $50 certainly can’t function with prices below $40) inevityably leading to higher prices, Morgan Stanley warns, “in an oversupplied market, there is no intrinsic value for crude oil. The only guide posts are that the ceiling is set by producer hedging while the floor is set by investor and consumer appetite to buy. As a result, non-fundamental factors, such as the USD, are arguably more important price drivers.”

The “Ma” bounce has failed… 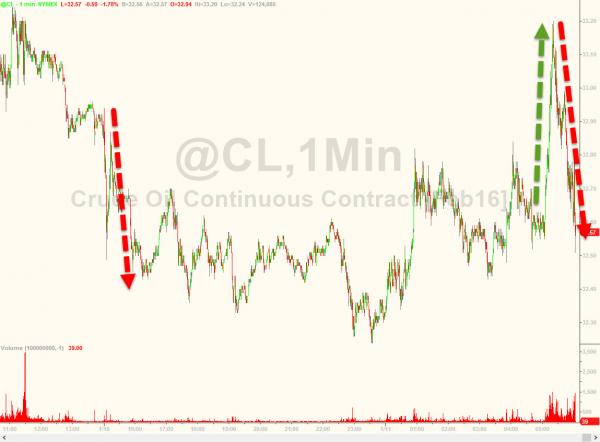 Just as we predicted a year ago…

…because while equities are pricing in an unsustainable 23x in foward energy P/E, another market, that of interest rate forwards, is implying oil plunging down to $35!

As a reminder, oil is among other things, a function of rate differentials or said simpler, USD strength, strength which appears is not going anywhere. And as the following calculation from Cornerstone implies, should the EURUSD tumble to parity which is what Draghi’s desire seems to be, it would suggest a 22% plunge in oil from here, implying a $35.5 price of oil one year from now.

Oil in the $20s is possible, but not for the reasons often cited. Several analysts and press reports have cited $20 oil scenarios for well over a year on the premise that storage would reach “tank tops” in the US or globally and force oil prices to “shut-in economics.” In reality, such scenarios are unlikely and often ignore how physical oil trading functions. 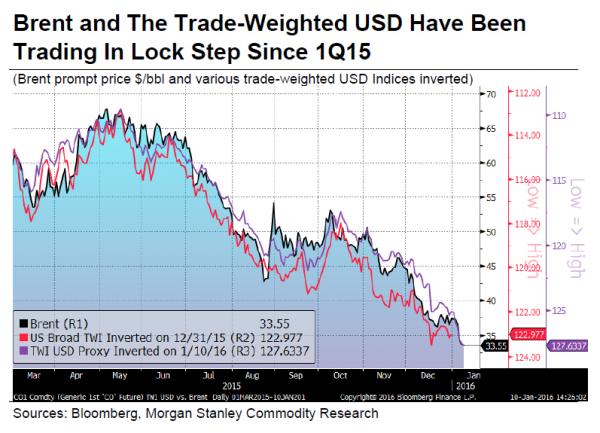 Moreover, there are few scenarios where reaching cash costs would force producers to shut in, especially over any shorter time horizon. Lastly, these forecasts also fail to appreciate that marginal changes in fundamentals are not driving marginal changes in oil prices.

It’s not about deteriorating fundamentals: The USD and non-fundamental factors continue to drive oil prices. Oversupply drove oil to ranges that should slow investment, but it does not set the price level. Oversupply may have pushed oil prices under $60, but the difference between $35 oil and $55 oil is primarily the USD, in our view. 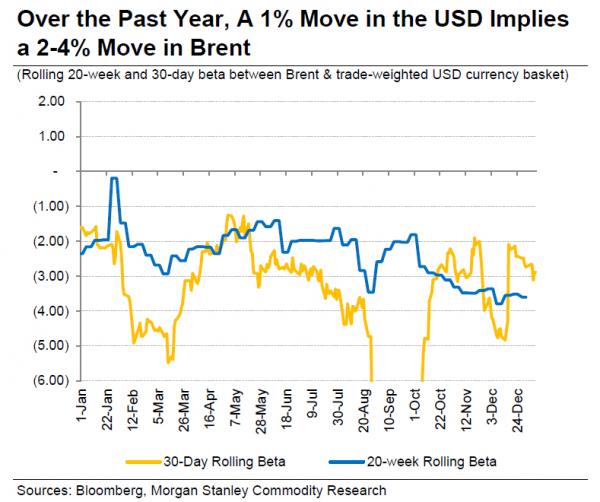 In an oversupplied market, there is no intrinsic value for crude oil. The only guide posts are that the ceiling is set by producer hedging while the floor is set by investor and consumer appetite to buy. As a result, non-fundamental factors, such as the USD, were arguably more important price drivers in 2015. In fact, when we assess the >30% decline in oil since early Nov, much of it is attributable to the appreciation in the trade-weighted USD (not the DXY). With the oil market likely to remain oversupplied throughout 2016, we see no reason for this trading paradigm to change. 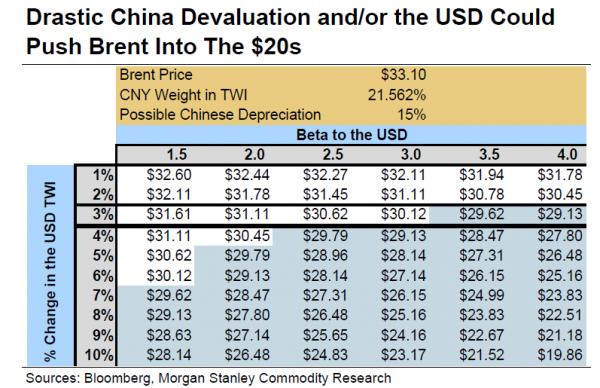 Given the continued USD appreciation, $20-25 oil price scenarios are possible simply due to currency. For much of the year, the rolling 20 and 30-week beta to the trade-weighted USD has ranged from 2-3, with recent figures even exceeding 3. On a shorter duration, the rolling 20-day and 30-day beta for the weighted USD basket of currencies has generally ranged from 2-4 with periods exceeding 4. In other words, for every 1% move in the trade-weighted USD, we tend to see a 2-4% move in Brent. Therefore, a 3.2% increase in the USD, as implied by a 15% yuan devaluation, could push down oil 6-15% ($2-5/bbl), which could put oil in the high $20s. If other currencies move as well, the move in the USD and oil could be even greater. Hence, we remain bearish, even after the notable downward move already.

Finally we leave it to perennial crude bull Andy Hall (whose fund lost 35% in 2015) to explain where it all went wrong:

We continue to believe that the shorter term headwinds are ultimately trumped by the longer term outlook for prices which remains firmly to the upside: an industry that couldn’t function at $50 certainly can’t function with prices below $40.