One and Done Fed is a Wall Street Fantasy

One of the current myths promulgated by Wall Street is that the Federal Reserve will raise rates once this year, breathe a sigh of relief, and be done until the “12th of never”. But those who are familiar with our central bank’s history are aware that the Federal Open Market Committee (FOMC) has never tightened the Fed Funds Rate just once. A quarter point hiking cycle has no historical basis and is just wishful Wall Street thinking.

In the spring of 1988 fearing a rise in core inflation, the Fed went on a tightening cycle that lasted from April 1988 to March 1989.  During that time the Fed funds rate increased more than 300 basis points. This episode was followed by a recession beginning in 1990, suggesting that the corrective policy actions may have intensified a weakening economy, and that the Fed is prone to being economically tone deaf.

Then, during the fall of 1993, a rise in long rates represented a potential inflation scare and led the FOMC to raise the Funds Rate again another 300 basis points between February 1994 and February 1995.

And finally, as concerns over a potential housing bubble mounted, the Fed began to hike rates in June 2004 and continued through July of 2006, for a total increase of 425 basis points. Soon after, the subprime mortgage crisis was exposed and the Great Recession was in full throttle.

But we don’t have to be Fed soothsayers to predict the planned trajectory of the Funds Rate; the Fed makes its intentions public during four of its eight scheduled meetings. During those meetings the FOMC provides us with a model of the members’ expectations for policy rates in a chart known as the “dot plot.” 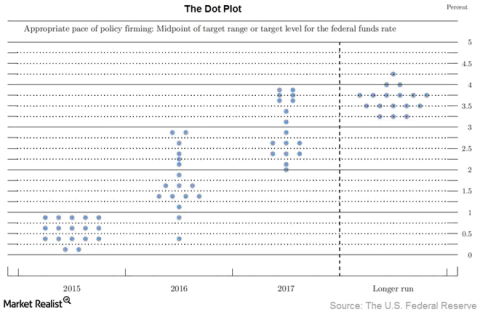 While the FOMC is not bound by its “dot plot” predictions, it does provide insight into committee’s monetary policy plans. The markets are aware of their intentions and will begin to price in future interest rates moves as soon as the Fed begins liftoff.

The latest dot plot shows that all 17 members of the FOMC believe the Federal Funds Rate should be under 1% by the end of 2015, with the median member seeing rates between 0.5% and 0.75%. That signals an end to ZIRP (zero interest rate policy). And although members differ on the level of rates at the end of 2016–with the median rate of around 1.6%–all members anticipate rates to rise throughout next year.

Therefore the market shouldn’t expect to see a “one and done” move on interest rates because the Fed has told us not to anticipate one. The only reason overnight rates won’t be moving above 1.5% by the end of 2016 will be if the unemployment rate moves higher due to a collapsing economy, which is not exactly good news for stock prices.

Furthermore, the Fed has worked very hard to be unconstrained by time; it has substituted the word “patient” for the phrase “data dependent.” Therefore, when the Fed raises rates Ms. Yellen will not say at her press conference that it’s a one and done operation, or that the Fed will wait until some appointed future timeframe for the second rate hike to occur. Instead, the Fed can only proclaim that the next rate hike will be based on further progress toward their inflation target.

The problem with that is if you look at the core PCE Index, inflation is currently moving away from their target. 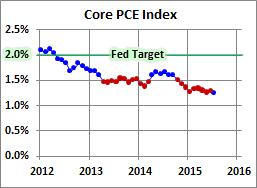 So why would the Fed still move you ask? Because the U-3 Unemployment rate is moving dangerously close to crossing what the FOMC believes is the inflationary Philips Curve Maginot line. This is the imaginary line where Keynesians believe a low unemployment rate triggers rising inflation.

However, anyone who lived through the stagflation of the 1970’s or who looks historically at the relationship between inflation and unemployment rates can proclaim with absolute certainty that the Phillips Curve is completely bogus.

That’s because inflation doesn’t come from more people becoming productive; inflation is a function of the market losing faith in the purchasing power of a currency through its dilution.

Therefore, as long as the Obamacare economy keeps producing part-time food service employees, the unemployment rate will continue to fall south of its current reading of 5.1%; and the Phillips-Curve-obsessed Fed will move more towards its dot plot goal in fear of employment inflation that is never coming.

The 2009 argument for a bull market was the Fed would keep printing money until the stock market and economy improved. Now the complete opposite is true, the Fed will slowly hike interest rates simply to get off the zero bound range it has been stuck at for seven years and because it is worried about a meaningless U-3 unemployment figure’s effect on inflation.

Nevertheless, for the first time in history it will be hiking rates into falling inflation, negative earnings and revenue growth on S&P 500 companies, and falling global GDP growth. Therefore, I predict the Fed will only be able to move the Fed Funds Rate higher by 50-75 bps before it becomes obvious even to the hopelessly confused FOMC that global markets and economies are in serious trouble.

This is the sad truth: either the massively overvalued stock market and artificially inflated economy will continue the insipient rollover that began in the middle of August, causing the Fed to stay on hold; or the Fed will begin to slowly hike rates, causing the yield curve to quickly invert and the economy to completely fall apart. This is why wise investors should now be out of, or short, the stock market. At least until the S&P 500 trades near 1600; or the Fed transitions to an easing stance.