by Gwynn Guilford at Quartz

This week’s Chinese stock market implosion has been widely viewed as a reaction to the Chinese government’s devaluing the yuan on Aug. 11—a move many presume was a frenzied bid to lower export prices and strengthen the economy.

This interpretation doesn’t stand up to scrutiny. First, Chinese investors haven’t been investing based on how the economy is doing, but rather, based on what they think the government will do to prop up the market. The crash, termed “Black Monday,” was more likely a reaction to the central bank’s failure over the weekend to announce a widely expected cut to the bank reserve requirement since previous cuts in February and April had boosted stock prices. The government eventually caved andannounced a cut on Tuesday (Aug. 25).

Second, the crash happened nearly two weeks after the devaluation, and the government only let the yuan depreciate by about 3% before swooping in and propping up its value again—which hardly helps exporters since the currency’s value effectively rose some 14% in the last year.

The devaluation probably had more to do with breaking the yuan’s tightly managed peg to the US dollar, an obligation that has been draining the economy of scarce liquidity as capital outflows swell.

Both moves—the government pulling back from its market bailout and the currency devaluation—stem from the same ominous problem: China’s leaders are scrambling to find the money to keep its economy running. To understand the broader forces that led to this predicament, here’s a chart-based explainer tracing its origins:

China has long pegged its currency to the US dollar at an artificially cheap rate. Keeping the yuan cheaper than it should be, even as export revenues and foreign investment gushed in, allowed China to amass huge foreign exchange reserves, as we explain in more detail here: 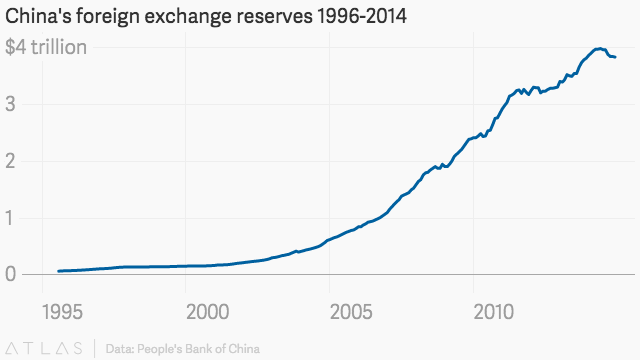 A cheap currency has also powered China’s investment-driven growth model (more on this here). By paying more yuan than the market would demand for each dollar, the People’s Bank of China (PBoC) created extra money out of thin air, sending it sloshing around in the economy. (Meanwhile, the PBoC prevented this from driving up inflation by setting its bank reserve requirements unusually high, as we explain here.) 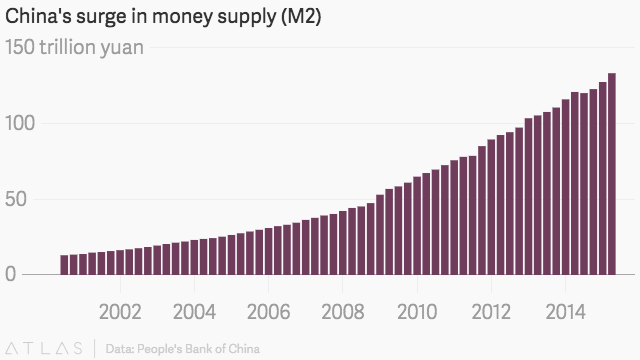 Easy money, easy lending, easy growth. This was especially true after the global financial crisis hit, when China pumped 4 trillion yuan ($586 billion in 2008 US dollars) into its economy to protect it from the fallout. The resulting double-digit growth attracted foreign investment and hot money inflows, raising demand for yuan. To buoy its faltering export industry, the PBoC had to buy even more dollars to prevent surging yuan demand from driving up the local currency’s value.

The government pumped the stock market

But growth is now slowing, making the $28 trillion in debt China racked up in the process even harder to pay off. 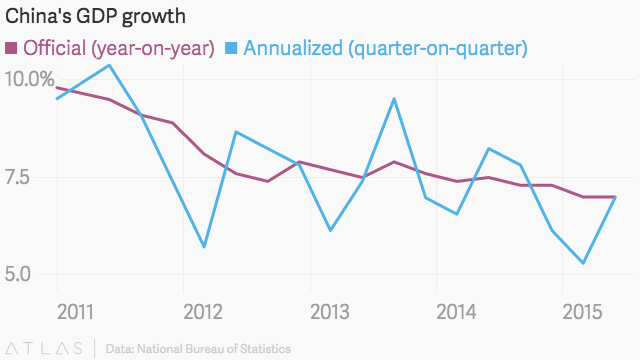 About a year ago, the government turned to pumping up the stock market. The thinking behind this move, says Derek Scissors, economist at the American Enterprise Institute, was, “Hey, why not address our huge problems by replacing debt with equity?” In other words, a bull market would help indebted companies raise new capital and pay off overdue loans. But eventually the market tanked. 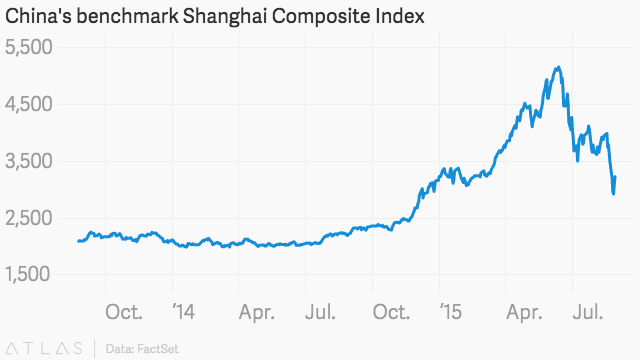 So starting in early July, the government launched a sweeping stock market bailout, vowing to prop up the Shanghai Composite Index until it hit 4,500. The problem is, every time it has neared that target level, investors start selling in anticipation that the government will pull back its support. As a result, the Chinese government has now spent as much as $1 trillion to prop up stocks.

While some investors were betting on stocks, others had seen the writing on the wall and were getting out—swapping their yuan for other currencies. Starting in late 2014, the influx of hot money reversed course, and speculative investment flooded out of China. One measure of that is the drop in (mostly) short-term trade finance from foreign banks, which started in Q4 2014: 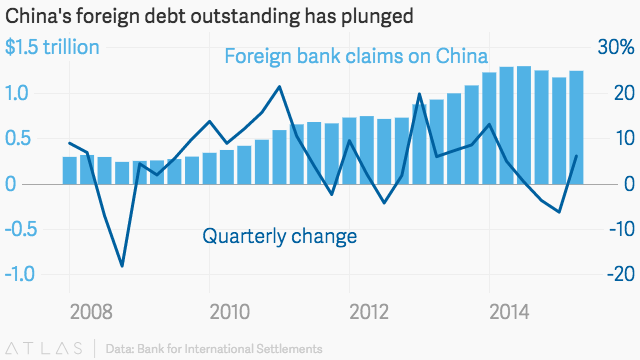 Another is the fall in foreign exchange that Chinese banks are holding: 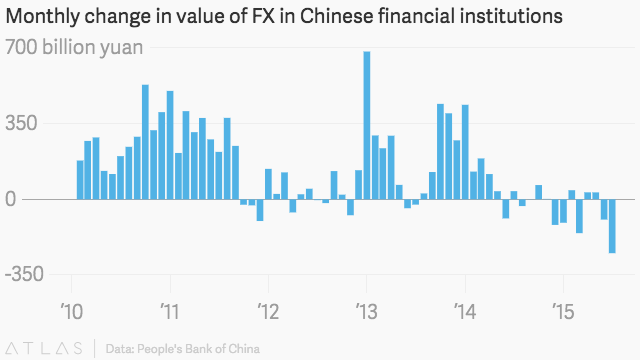 Once people started selling the yuan, others began fearing that their yuan holdings would lose value—so they sold too. Lower demand for the yuan should have lowered the currency’s value relative to the dollar. But the PBoC had to keep the yuan’s value stable. Not only had it promised to do so as a requirement of joining the IMF’s basket of central bank reserve currencies; the yuan’s stability and gradual appreciation has long attracted foreign capital into China, says Carlo Reiter, an analyst at J Capital Research. To continue propping up the yuan’s value, the PBoC started selling dollars from its precious reserves in exchange for yuan: 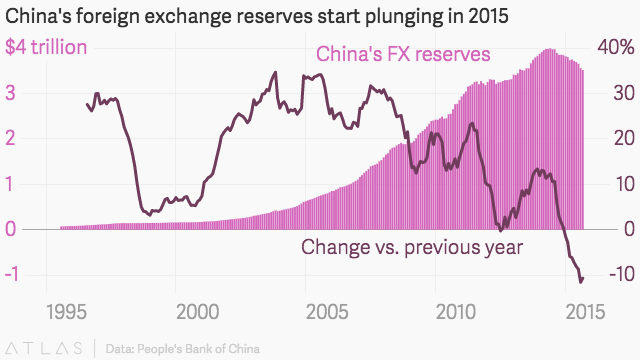 Buying back yuan lowered liquidity, however, which raised borrowing costs, putting a damper on borrowing and investment and threatening deflation: 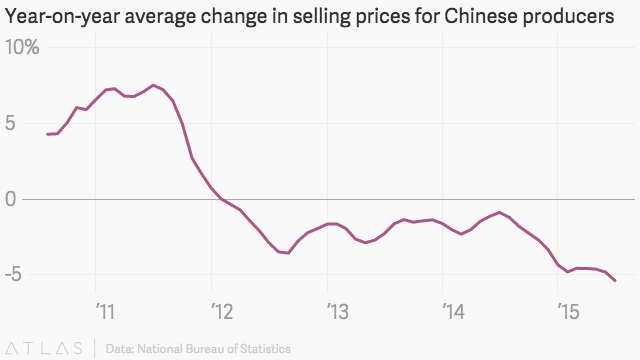 Higher borrowing costs exacerbated the country’s $28 trillion in debt, much of which has been borrowed at variable interest rates. 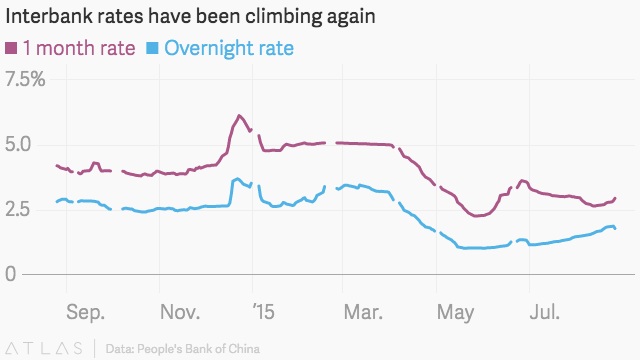 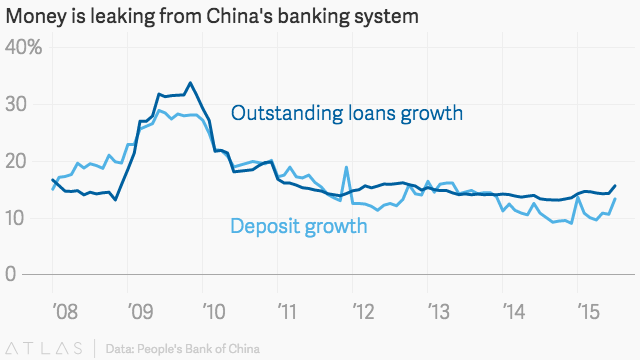 To help keep credit flowing, the Chinese government launched a bailout in early July (which, as we mentioned earlier, cost the government more than $1 trillion.) To fund this bailout, interbank lending by state-backed entities has surged, says Carlo Reiter, analyst at J Capital Research. In July, government institutions lent 9.3 trillion yuan to banks, mostly to boost the stock market, he says.

However, the flood of interbank capital eventually caught up with the PBoC. Adding even more money into the financial system put downward pressure on the yuan.

This brings us to the Aug. 11 currency devaluation, which likely occurred because the yuan became too “expensive to defend,” says Reiter. Nevertheless, the exchange rate has leveled off over the last few trading days—a sign that capital outflow is so great that the central bank has once again resorted to selling dollars for yuan. 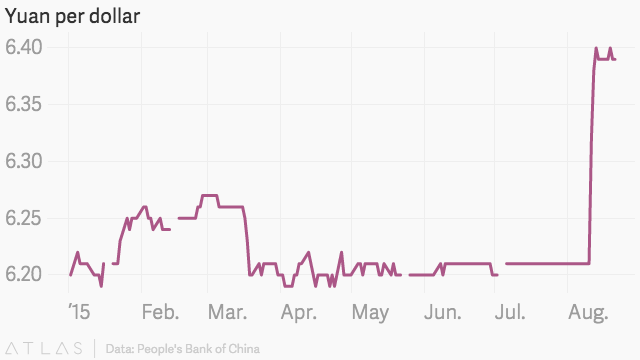 Already, this “battle to stabilize the currency has had a significant tightening effect on domestic liquidity conditions,” wrote Wei Yao, economist at Societe Generale, in an Aug. 25 note. In other words, the government’s grand plans to reduce its debt woes while preventing capital from flowing out may have the perverse effect of causing more of both.