Officials in many states have been facing extraordinary challenges in forecasting income taxes due to uncertainties related to capital gains, which can have a large impact on estimated taxes paid in December and January, and on payments with tax returns filed in April. The uncertainty has been heightened this year due to the strong performance of the stock market in 2013 and the un- intended consequences of the fiscal cliff. Calendar year 2013 ended up being a remarkable year for the stock market, gaining 19 percent as measured by the S&P 500 Index, creating a favorable environment for capital gains. On the other hand, for reasons discussed within, many taxpayers appear to have accelerated income from calendar year 2013 to calendar year 2012 to avoid higher federal tax rates, likely creating a “trough” in capital gains in 2013. This creates great uncertainty for states: Was the stock market strong enough to more than offset the “trough” effect related to the fiscal cliff, so that capital gains would be strong in 2013, or would the latter effect dominate, resulting in a large decline in capital gains?

In a followup report, the institute reports State Income Taxes Showed Declines in the First Quarter of 2014.

While the declines in income tax collections are not surprising, the softening in sales tax collection s is less expected and more worrisome. Among 41 early reporting states, sales tax collections showed declines in 11 states, with Arizona and California reporting the largest declines at 16.7 and 9.9 percent, respectively. The large declines in Arizona are mostly attributable to the expiration of a temporary one-cent tax increase for fiscal years 2011-2013. For the nation as a whole, the unusually cold winter may have temporarily depressed shopping, contributing to the sales tax slowdown.

State tax revenues have been recovering continuously for four straight years. However, the state revenue recovery has been much slower and more prolonged than in previous recoveries. State tax revenues were particularly strong in the first half of calendar year 2013, and particularly weak in the second half of calendar year 2013 and in the first quarter of 2014. This volatility probably is attributable more to taxpayer responses to planned and adopted federal policy changes and to legislated tax changes in many states than to underlying economic factors.

The declines in income tax revenue in the first quarter of 2014 likely reflect lower payments on the 2013 tax year of estimated taxes due in January. We expect that income tax collections will show further declines in the second quarter of 2014, when 2013 income tax returns due on April 15th are filed. However, it is hard to know how surprising the April surprises will be, as the tax year 2013 was also a very good year in the stock market. Once the figures for the month of April are available, we will have a clearer picture of the interplay between the strong stock market and the fiscal cliff, and their relative impact on the income tax collections. 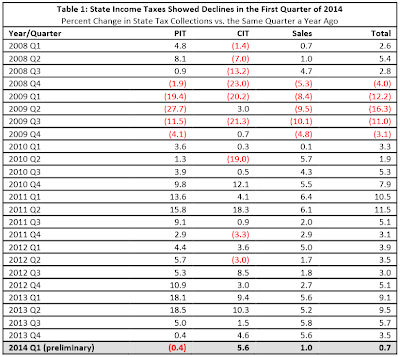