The Philadelphia Fed Bloomberg Consensus for the Philly Fed manufacturing index was 9.4. The index came in -6.3.

The Philly Fed’s headline index for general conditions fell back into the negative column, to minus 6.3 vs January’s 9.4. This is the first negative reading since May.

Shipments, suffering from a lack of orders and also from weather effects, fell dramatically, down 22 points to minus 9.9. The weather effect is evident in delivery times, which slowed 5.7 points to 2.9.

Weather is a temporary effect and isn’t holding down the longer term outlook in the sample as six-month readings are all strongly positive led by a 6.8 point gain for general conditions to 40.2.

The Philly Fed report doesn’t usually cite commentary but it does for February, saying respondents attributed much of the month’s weakness to severe winter weather. But January also was hit with severe weather. 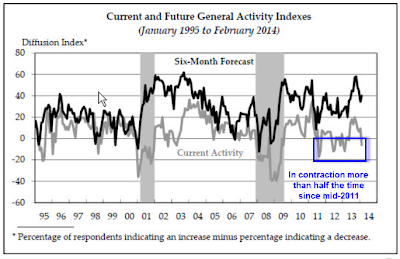 Over 45 percent of the firms characterized the demand as increasing, while 19 percent indicated it was decreasing. The largest percentage (43 percent) indicated that demand had increased modestly. Firms were also asked to provide estimates of production growth for the first quarter. Significantly more firms indicated that production would increase in the first quarter (55 percent) than indicated it would decrease (28 percent), and the average growth for the reporting firms was 0.5 percent. Over half of the firms indicated that production growth would represent an acceleration compared with the fourth quarter.