Pictures Worth A Thousand Words: Coafeidian, The Chinese Eco-City That Became A Ghost Town

by Gilles Sabrie in Caofeidian for The Guardian

‘As precious as gold …’ That was how then-president Hu Jintao described Caofeidian during his visit in 2006. It was pledged to be ‘the world’s first fully realised eco-city’ – yet 10 years and almost $100bn later, only a few thousand inhabitants have moved to this land reclaimed from the sea … 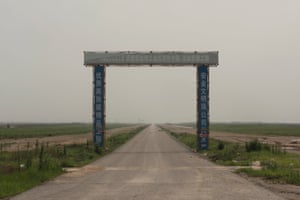 The leftover gate from a construction site – for a road that doesn’t lead anywhere. Caofeidian eco-city, begun in 2003, is located 200km southeast of Beijing. All photographs: Gilles Sabrie 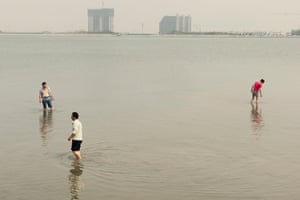 Locals fish for crabs in the Bohai Sea as construction sites stand idle in the background. Caofeidian, in Hebei province, was originally a small island that has expanded using land reclaimed from the sea. 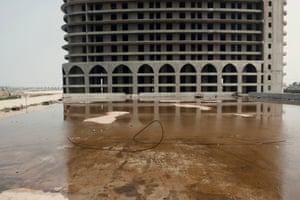 The ‘eco-city’ was made possible through huge bank loans. Once it was half-built, these loans were halted and many projects suspended due to the rising cost of raw materials and a lack of government support. 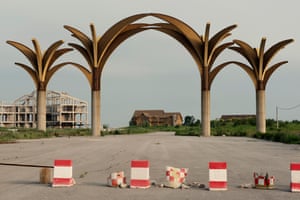 The knock-on effects are also to be seen in this abandoned tourist resort by the shore of Bohai Sea. 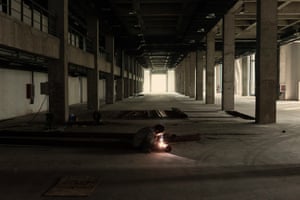 A lone worker inside Caofeidian city’s mostly abandoned industrial park. He works for a company producing solar panels – a heavily subsidised industry in China that is plagued by over capacity. 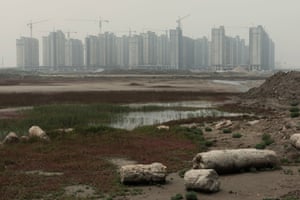 Caofeidian eco-city was planned to accommodate one million inhabitants, yet only a few thousand live there today. It has joined the growing ranks of China’s ghost cities. 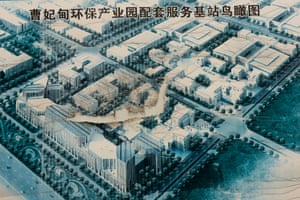 A torn poster showing the original plan for Caofeidian Environmental Industries Park. Government and state owned industrial enterprises are said to have invested 561 billion yuan (US $91bn) in the area over the past decade, but the park was never completed. 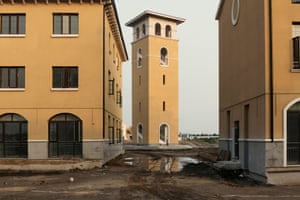 A shopping mall modelled on a traditional Italian city was finished, but businesses haven’t moved owing to the small number of city residents. 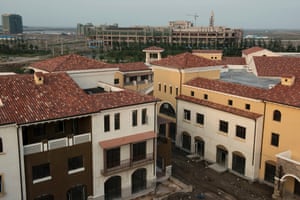 Behind the empty mall, a branch of Tangshan University is under construction. The provincial government is moving it to Caofeidian to make up for the lack of businesses in the new city. 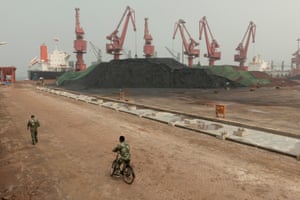 Security guards by Cafofeidian harbour, where coal and iron ore are unloaded to feed the Shougang steel mill. The mill was moved from Beijing to Caofeidian in 2006, but is mired in debt. 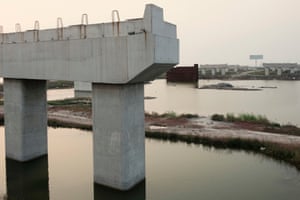 Bridge to nowhere: a six-lane road span was abandoned after 10 support pylons had been erected. 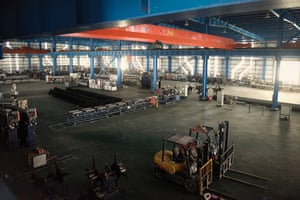 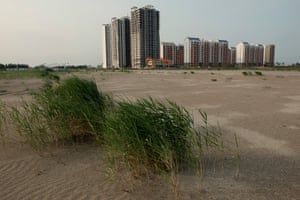 Empty residential buildings in Caofeidian eco-city. Once described as the world’s first fully realised eco-city, Caofeidian is now struggling to pay daily interest rates on the billions of yuan borrowed to build it.

Source: Caofeidian, the Chinese eco-city that became a ghost town – in pictures | Cities | The Guardian