The electoral earthquake over the weekend in one of the eurozone’s ‘big four’ states has echoes of the shock upsets in Greece and Portugal this year, a reminder that the delayed political fuse from years of economic depression and mass unemployment can detonate even once the worst seems to be over.

Bank stocks plummeted on the Madrid bourse as startled investors awoke to the possibility of a Left-wing coalition that included the ultra-radical Podemos party, which won 20.7pc of the votes with threats to overturn the government’s bank bail-out and to restructure financial debt.

Pablo Iglesias, the pony-tailed leader of the Podemos rebellion, warned Brussels, Berlin, and Frankfurt that Spain was retaking control over its own destiny after years of kowtowing to eurozone demands.

“Our message to Europe is clear. Spain will never again be the periphery of Germany. We will strive to restore the meaning of the word sovereignty to our country,” he said. 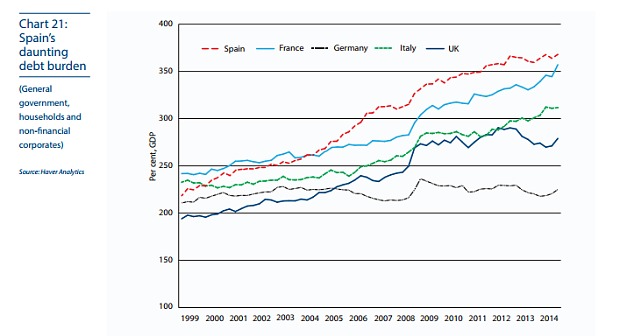 The risk spread on Spanish 10-year bonds jumped eight basis points to 123 over German Bunds, though there is no imminent danger of a fresh debt crisis as long as the European Central Bank is buying Spanish bonds under quantitative easing. The IBEX index of equities slid 2.5pc, with Banco Popular and Caixabank both off 7pc.

Premier Mariano Rajoy has lost his absolute majority in the Cortes. Support for the conservative Partido Popular crashed from 44pc to 29pc, costing Mr Rajoy 5m votes as a festering corruption scandal took its toll.

The electorate punished the two mainstream parties that have dominated Spanish politics since the end of the Franco dictatorship in the 1970s, and which by turns became the reluctant enforcers of eurozone austerity.

• Europe braced for a revolutionary Leftist backlash after Greece

The Socialists (PSOE) averted electoral collapse but have lost their hegemony over the Left and risk being outflanked and ultimately destroyed by Podemos, just as Syriza annihilated the once-dominant PASOK party in Greece.

It had been widely assumed that Mr Rajoy would have enough seats to form a coalition with the free-market and anti-corruption party Ciudadanos, but this new reform movement stalled in the closing weeks of the campaign. 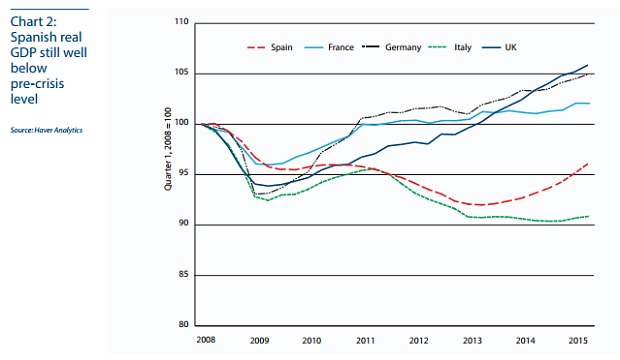 “There is enormous austerity fatigue and the country as a whole has clearly shifted to the Left,” said sovereign bond strategist Nicholas Spiro. Yet the Left has not won enough votes either to form a clear government.

“The issue now is whether Spain is governable. All the parties are at daggers drawn and this could drag on for weeks. I don’t see any sustainable solution. We can certainly forget about reform,” he said.

Mr Spiro said Spain has already seen a “dramatic deterioration” in the underlying public finances over the last eighteen months, although this has been disguised by a cyclical rebound, the stimulus of cheap oil and a weak euro, and QE from Frankfurt. “They have simply gone for growth,” he said.

Yvan Mamalet from Societe Generale said Spain’s potential growth rate has fallen to 1pc, from over 3pc before the crisis, a sign of how much damage has been done by the ‘hysteresis’ effects of long-term unemployment and lack of investment.

• A new disease is spreading across Europe: hysteresis 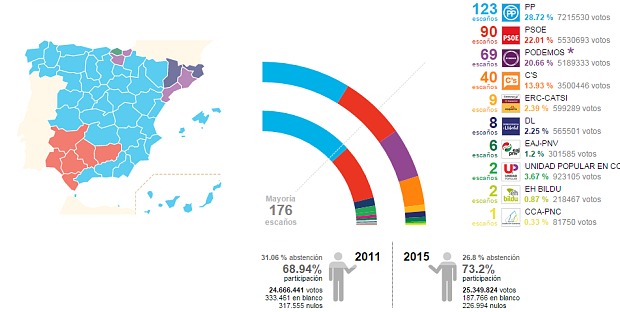 Public debt has jumped to 100pc of GDP and is nearing the safe limit for a country in a currency union with no sovereign central bank. “Spain now has very limited fiscal space and any external shock could push debt towards less sustainable levels, above 130pc,” he said.

Spain has been held up as the poster-child of austerity and reform in southern Europe. But while it is true that growth has rebounded, output is still 5pc below its previous peak. The deeper pathologies and imbalances of the pre-crisis era are still there.

The International Monetary Fund says the “structural deficit” has risen from 1.8pc of GDP last year to 2.5pc this year. This is courting fate given that Spain’s net international investment position (NIIP) is minus 90pc of GDP, far beyond the 30pc safety limit. “Deep structural problems remain and vulnerabilities persist,” it said.

The IMF warned that Spain still needs radical reform of the labour laws to raise low productivity levels and move up the value-chain, and cited “reversal of past reforms” as the key risk. That is exactly what may now happen.

If a Socialist-Podemos coalition takes charge at the head of a Left alliance, it will not be singing the IMF tune.

It would also be foreign policy disaster for German Chancellor Angela Merkel, who has already lost Italy, Greece, and Portugal to the Left, and faces the growing risk of anti-austerity ‘Latin bloc’ led by the Socialists in France.

A swing to the Left in Spain would change the balance of power in the European Council and spell the end of Mrs Merkel’s control over the EMU policy machinery.

Mr Iglesias has toned down his hard-line views, trying to strike a tone of authority in foreign affairs and economics. “When you want to be leader of your country, you have to be credible,” he said. 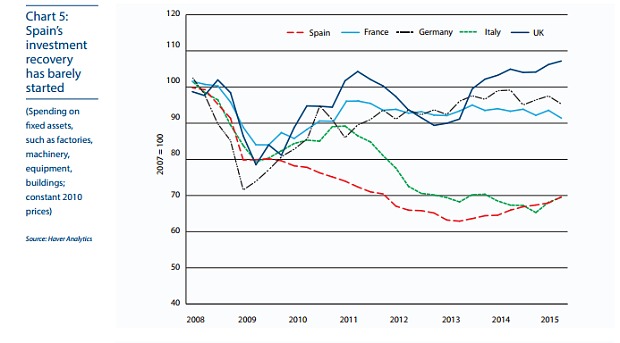 The party has dropped its call for the seizure of telecommunications, transport, the banks, energy companies, and the commanding heights of the economy, limiting nationalisation to “exceptional” circumstances.

It no longer demands restructuring of the country’s €1.1 trillion public debt, opting instead for an audit to determine which parts of the bank bail-out debt is odious and should be repudiated. It still wants a 35-hour week, but now accepts that the retirement age must rise to 65. Plans to leave NATO have been shelved.

Yet Podemos, a child of the ‘Indignados’ revolt against austerity, is led by young university professors steeped in the theories of Italy’s former Communist guru Antonio Gramsci. They have learned a lesson watching Syriza make blunders in Greece, but they are no less radical.

Simon Tilford from the Centre for European Reform said Spain is not out of the woods and the eurozone’s elites are “mistaking a modest cyclical upturn for something more profound”. 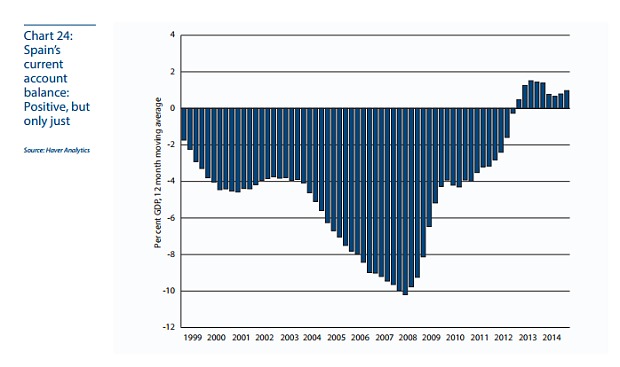 There has been an export miracle of sorts, led by a surge in car output as multinational companies switch plant from France to Spain to take advantage of wage cuts, reaching 27pc for new workers at plants in Valladolid.

But what has really eliminated the current account deficit is a 12pc collapse in internal demand. Imports have been choked. The country can barely balance its external books with unemployment at 22pc. A full recovery would quickly expose Spain’s chronic lack of competitiveness within the euro structure.

Mr Tilford warns that the country will enter the next global downturn with its economic defences largely exhausted and few tools left to fight recession, and above all with populist parties already gaining a deep foothold. The political shock over the weekend is the first thunderclap.