Population Deflation——–Spain, Germany, Italy Got It

On the demographic front things are not looking so good for the eurozone.

With declining birth rates and the aging of the population, Mario Draghi will struggle to produce inflation in a population deflationary environment.

Spain’s population will fall by more than five million over the next 50 years, according to a forecast that raises the prospect of even more “ghost villages” around the country.

In the first six months of this year, Spain recorded 225,924 deaths and 206,656 births, the national statistics institute reported. The country has not seen deaths exceed births consistently since the civil war, from 1936 to 1939, and before that the 1918 Spanish flu pandemic.

Time for Spain to Address its Plummeting birth rate?

The English version El Pais asks Is it time for Spain to address its plummeting birth rate?

Figures from the National Statistics Institute (INS) show there was a peak in 1944, with 23 births per 1,000 inhabitants. But that number bottomed out in 1998 when only nine births per 1,000 were reported.

“We have seen an incredible decline in the birth rate, which has been cut by half since 1975, and this trend is here to stay,” says Andrés, of the University of Palencia.

But for Julio Vinuesa, a demographer at Madrid’s Autónoma University, the study doesn’t provide any new information, but simply reiterates the fact that there has been “a drop” in Spanish birth rates.

“We are witnessing a rapid decline in births and it seems that nobody cares. In the short term it is a relief because it means less spending for families and for the state, and nobody is complaining because no one stops to think about the future consequences,” he says.

British economist Paul Wallace, author of Agequake, which investigates the causes and effects of population aging, has argued that the major investment for any society must be in its own replacement. In this case, Spain has failed.

For the past 10 years, Vinuesa has been pushing for “policies to encourage fertility.” But no one has listened to him.

In almost half of Spanish provinces, a third of inhabitants are aged 65 or over. Quite literally, it’s a case of Spain’s Dying Interior.

A new map is emerging of Spain’s interior, where a huge swathe of the country is slowly dying as a result of aging populations and migration to the cities. In 22 provinces, a third of inhabitants are already aged 65 or over, while the national average is 16.7 percent. When in 2005 demographer Francisco Zamora was asked to calculate how best the country could retain its population structure in 2050, the only answer he could come up with was for women to have 7.5 children each.

A decade later, he says, “there is nothing to be done other than selective immigration.” But Spain has already witnessed rapid immigration – around 6.5 million people have come into the country over the last 20 years – while the birth rate continues to fall, from 1.4 children per woman in 2008 to 1.27 in 2013.

Demographers say the majority of people who work in the countryside live in towns rather than rural communities. The villages will increasingly be a place to visit at the weekend, and will slowly die out as their populations age.

Germany’s birth rate rose last year to its highest level in 12 years, helped by years of economic growth and government support, but not enough to offset the death rate, and its overall population continued to decline.

The declining number of Germans is partly being offset by rising immigration. Some 8.6 percent of its population of 81.8 million are foreigners.

Also, Germany has taken in 40 percent of the refugees arriving in the European Union this year. On Wednesday, the government raised its forecast for an influx of 800,000 people this year fleeing war and poverty in the Middle East, Asia and Africa.

Steady economic growth since 2010 and generous pro-family policies by successive governments in recent years have helped lift the birth rate, the statistics office in Wiesbaden said. Still, “we’ve got a lot of hard work ahead of us,” said Family Minister Manuela Schwesig.

The number of births is likely to start falling again, because economic upheaval cut the birth rate in the former East Germany after unification in 1990, officials said.

“There was a steep fall-off in births after 1990 and that means there are now fewer women in the main child-bearing ages,” said Olga Poetzsch, a government statistician.

Germany’s birth rate peaked in 1964 at 1.4 million, Poetzsch said. Deaths have exceed births [since] 1972, by a total of about 5 million fewer births than deaths. 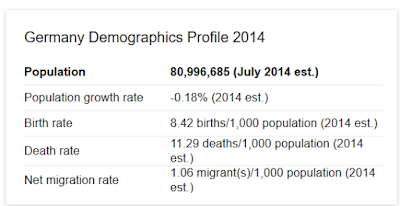 The above from Germany Demographics Profile 2014

Italy on Threshold of Population Deflation

Fewer babies were born in Italy in 2014 than in any other year since the modern Italian state was formed in 1861, new data show, highlighting the demographic challenge faced by the country’s chronically sluggish economy.

National statistics office ISTAT said on Thursday the number of live births last year was 509,000, or 5,000 fewer than in 2013, rounding off half a century of decline.

The number of babies born to both natives and foreigners living in Italy dropped as immigration, which used to support the overall birth rate, tumbled to its lowest level for five years.

The mortality rate also declined last year, stretching life expectancy for Italian men to 80.2 years, and to 84.9 years for women.

“We are very close to the threshold of non-renewal where the people dying are not replaced by new-borns. That means we are a dying country,” Health Minister Beatrice Lorenzin said.

The government of Prime Minister Matteo Renzi is scrambling to give the economy a boost by reforming the sclerotic labour market and persuading the country’s youth not to migrate and work abroad.

But the population is shrinking in most of the poorer south, where per-capita gross domestic product is about half that in the centre and north.

The above from France Demographics Profile 2014

The largest eurozone country (Germany) and the fourth-largest (Spain) are in population deflation while the third-largest is on the cusp.

Economists are screaming for politicians to “do something”. It would help if they figured out the cause first. But that’s not the way of either economists or politicians.

The problems are obvious but economists have not figured it out. Forget the studies, here are some key factors: 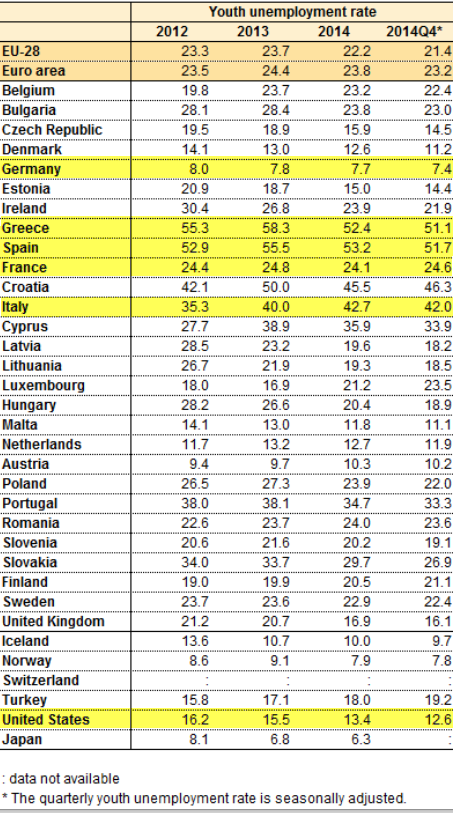 The above from Eurostat Statistics – Youth Unemployment

How the hell are you going to get married, buy a house, and start a family when youth unemployment is at record highs above 40% in several countries?

The system  is designed to fail. The youth are supposed to pay for the pensions of the retirees. How is that supposed to work when the youth have no work? Most millennials understand the pension and healthcare obligations they fund for their elders will not be there for them or their kids.

Order workers and pensioners do not want to change the rules making it easier to fire workers or reduce pensions. If someone cannot be fired, they will not be hired in the first place.

Without a doubt kids are putting of marriage and family formation longer and longer, even in countries like Germany where jobs are relatively plentiful. Why? Various reasons include: the need to take care of their elders prevents or discourages new household formation, the nannycrat society where the state takes more and more of ones wages, real wages are in decline, and home prices are not affordable.

In the foolish attempt of central banks to beat deflation, asset prices (especially the price of homes), have risen well beyond the affordability range of millennials.  In short, attempts by central bankers to force inflation in a technological and demographically deflationary world is highly counterproductive.

Many millennials saw their parents or friend’s parents loser their home in the financial crisis. They do not want to be in the same boat.

Central banks and governments have not figured out their inflationary policies, protective work rules, and government bureaucracies in general are the central reasons for this mess.

The process is additive and self-reinforcing.