Presenting The New Plan For A Eurozone Superstate—–Curly, Larry And Moe 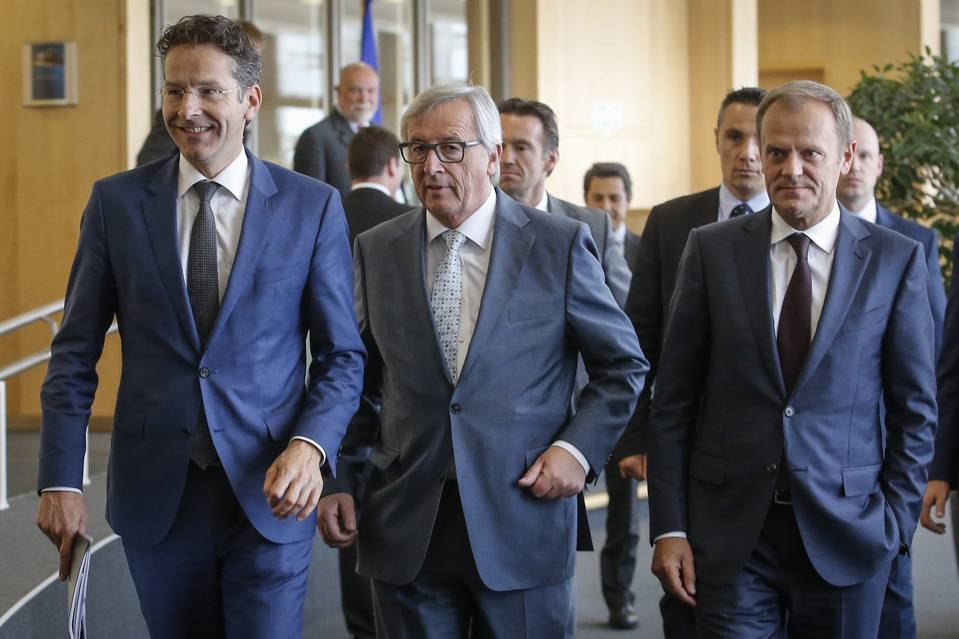 ENLARGE
Dutch finance chief Jeroen Dijsselbloem, left, with European Commission President Jean-Claude Juncker, center, and President of the European Council Donald Tusk, right.
By Matthew Dalton
European officials released a plan to address flaws in the eurozone’s makeup that would see its members sacrifice more of their national sovereignty for the economic good of the entire currency bloc.

That will likely take time: The plan released on Sunday envisions its more-ambitious measures, such as a shared budget for the eurozone, possibly taking 10 years to come into effect, reflecting the political obstacles that now stand in the way of drawing the its 19 disparate nations more closely together.

Despite those hurdles, senior European officials who have pushed for the plan say fundamental changes to the eurozone are needed to prevent a repeat of the bloc’s debt crisis, which was caused in large part by wages and prices in the south rising much faster than they did in the north.

The eurozone has proved unable to reverse the loss of competitiveness in the south, leaving those countries grappling with unemployment rates exceeding 20% in some cases and little prospect of a significant recovery soon.

Greece, in particular, remains engulfed in crisis, and is running out of time to reach a deal that would avert its exit from the eurozone. 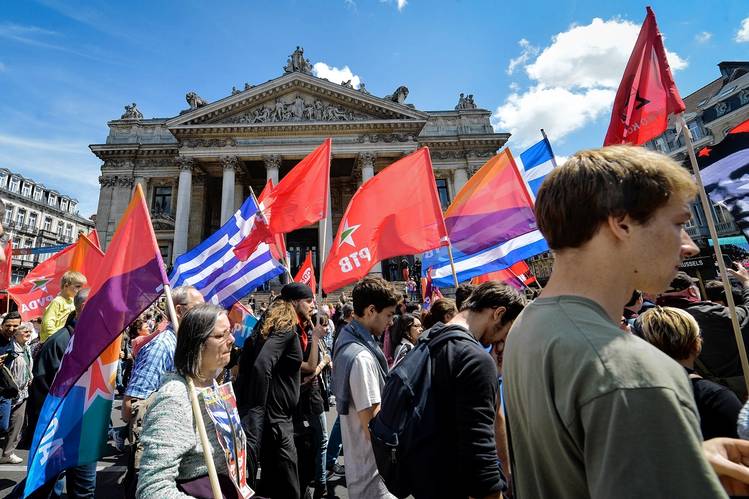 ENLARGE
Demonstrators in Brussels take part in a rally on Sunday in support of the Greek people and against further austerity measures in Greece. Photo: stephanie lecocq/European Pressphoto Agency

The plan—written by European Commission President Jean-Claude Juncker in cooperation with the European Central Bank, the European Council, the European Parliament and the group representing the eurozone’s finance ministers—makes the case that without more political cohesion backing the bloc’s economic policies, the eurozone remains vulnerable.

“Preventing unsustainable policies and absorbing shocks individually and collectively did not work well before or during the crisis,” the plan states. “Though several important institutional improvements have since been made, the legacy of the initial shortcomings persists.”

As a result, many recommendations approved by EU institutions for national authorities aren’t being followed.

In the short term, the plan calls for using the eurozone’s existing powers to penalize countries for unsustainable macroeconomic policies more aggressively, to ensure national governments follow EU recommendations. These powers are now rarely used, since the EU is reluctant to penalize governments for macroeconomic outcomes over which they have little control. The plan also proposes a “competitiveness authority” for each country, to assess whether wages are rising in line with worker productivity.

Starting in 2018, the eurozone should create a common budget to help absorb shocks that shake the currency bloc, according to the proposal. Such a measure would allow the bloc to deal with slumps more like the U.S. federal government does.

When the global financial crisis hit the U.S., Washington continued to pay Social Security, Medicare, Medicaid and unemployment benefits for people across the country. That helped cushion the blow to states such as Nevada and Florida that were particularly hard-hit by the crisis.

The report suggests the creation of a eurozone treasury that would make collective decisions about the bloc’s budget decisions.

“All mature monetary unions have put in place a common macroeconomic stabilization function to better deal with shocks that cannot be managed at a national level alone,” it says.

It also backs the contentious idea of having a eurozone-wide program for insuring bank deposits, replacing the current system in which national governments insure the deposits of their own banks. Eurozone insurance would protect the financial systems of countries with budget problems, since these nations may not have the capacity to stand behind their own deposit programs.

With Greece’s future in the eurozone in doubt, though, such ideas stand little chance of being approved in today’s political environment. Politicians across the currency area have little trust of the government in Athens. And doubts linger in Germany about the commitment of nations such as Italy and Spain to structural reforms that Berlin insists are necessary to open its government checkbook for other nations.

A previous report written by the eurozone leaders in 2012 calling for an overhaul of the currency bloc have gained little traction. National capitals were happy to have survived the debt crisis without the eurozone splitting apart, while politicians in Germany, the Netherlands and Finland had little appetite to double down on eurozone integration.

But this report leaves out some of the most controversial provisions in the previous one, such as a call to pool the government debts of eurozone member states. That idea is anathema to Germany, the Netherlands and Finland.