Price To Sales Ratio – Another Nail In The Coffin? 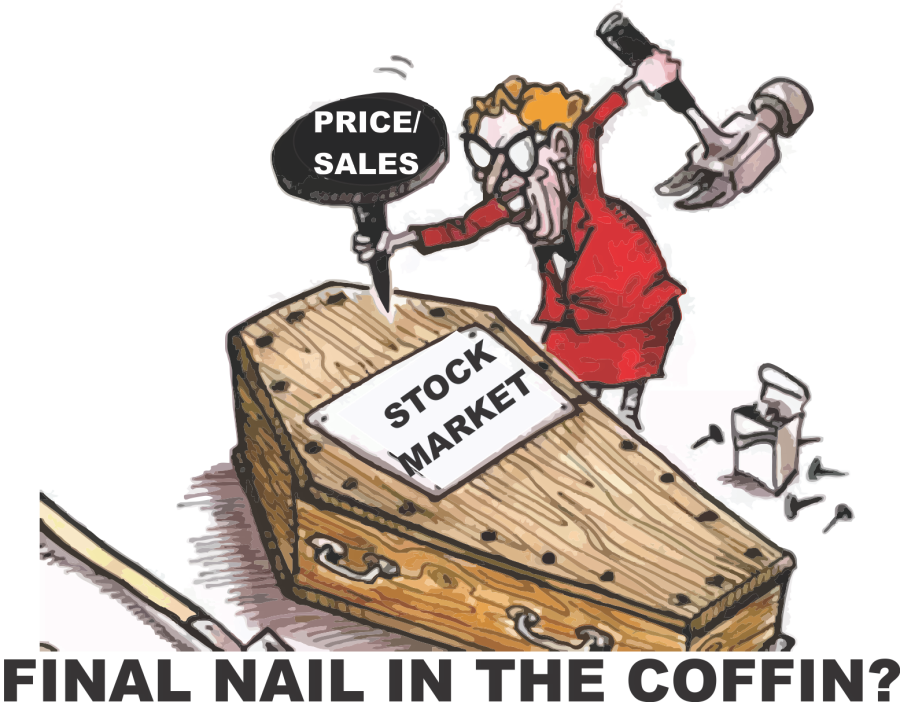 720 Global has repeatedly warned that U.S. equity valuations are historically high and, of equal concern, not properly reflective of the nation’s weak economic growth potential. In this article we provide further support for that opinion by examining the ratio of equity prices to corporate revenue also known as the price to sales ratio (P/S). At its current record level, the P/S ratio leads us to one of two conclusions: 1) Investors are extremely optimistic about future economic and earnings growth or 2) Investors are once again caught up in the frenzy of an equity bubble and willing to invest at valuations well above the norm.

Either way, the sustainability or extension of the current P/S ratio to even higher levels would be remarkable. What follows here is an exercise in logic aimed at providing clarity on the topic.

Before showing you the current P/S ratio in relation to prior market environments, it is important to first consider two related concepts that frame the message the market is sending us.

Consider someone who is evaluating the purchase of one of two dry cleaning stores (A and B). The two businesses are alike with similar sales, pricing, and locations. However, based on the buyers’ analysis, store A’s future revenue is limited to its historical 2% growth rate. Conversely, the potential buyer believes that store B, despite 2% growth in the past, has a few advantages that are underutilized which the buyer believes can potentially produce a revenue growth rate of 10%. If stores A and B are offered at the same price the buyer would most likely opt to purchase store B. It is also probable the buyer would be willing to pay a higher price for store B versus store A. Therefore highlighting that revenue growth potential is a key factor when deciding how much to pay for a business.

Purchasing a mutual fund, ETF or an equity security is essentially buying a claim on a potential future stream of earnings cash flows, just like the dry cleaning business from the prior example. The odds, therefore, of a rewarding investment are substantially increased when a company, or index for that matter, offering substantial market growth potential is purchased at a lower than average P/S ratio. Value investors actively seek such situations.

Logically one would correctly deduce that P/S ratios should tend to follow a similar directional path as expected revenues.

Corporate earnings growth rates and economic growth rates are nearly identical over long periods. While many investors may argue that corporate earnings growth varies from the level of domestic economic activity due to the globalization of the economy, productivity enhancements that lower expenses for corporations, interest rates and a host of other factors, history proves otherwise.

The graph below shows the running three-year annualized growth rate of U.S. real GDP since 1950.  While there have been significant ebbs and flows in the rate of growth over time, the trend as shown by the red dotted regression line is lower. The trend line forecasts average GDP growth for the next 10 years (green line) of 1.85%, a level that is historically recessionary. As we have shared before, the combination of negligible productivity growth, heavy debt loads, short-termism and demographic changes will continue to produce headwinds that extract a heavy price on economic growth in the years ahead.  Barring major changes in the way the economy is being managed or a globally transformative breakthrough, there is little reason to expect a more optimistic outcome. Given this expectation, the outlook for corporate earnings is equally dismal and likely to produce similar negligible growth rates. Based on the fact that the P/S ratio has been steadily rising and has eclipsed prior peaks, we are left to select from one of two conclusions as we mentioned previously:

After further deliberation, however, there is a very plausible third possibility. Perhaps the lack of viable options for investors to generate acceptable returns, has them reluctantly ignoring the risks they must assume in those efforts.  If that is indeed the case, then one should also consider the possibility that the next correction will extract more than a pound of flesh in damage.

We remain confident that extravagant earnings and economic growth are not in the cards, and it is very likely monetary policy is fueling a new form of bubble logic. Invest with caution!