Stocks have soared. But despite maxed-out financial engineering and ceaseless Wall-Street hype, the first half is shaping up to be tough.

Week after week, corporations and analysts have been whittling down their estimates. By now, revenues of the S&P 500 companies are expected to decline 2.8% in Q1 from a year ago – the worst year-over-year decline since Q3 of crisis year 2009.

But the unstoppable healthcare sector is expected to see revenue growth of 9.1%, according to FactSet, with three sub-sectors seeing double-digit sales growth: Healthcare Technology (38%), Biotechnology (23%), and Health Care Providers & Services (11%).

That’s why no one in Congress, or anywhere else, wants to get healthcare expenditures under control. It may eat up Medicare, Medicaid, state healthcare programs, and retiree healthcare programs. It may be economically cannibalistic for the country. It may bankrupt municipalities and states. It may blow up federal programs. But in its manner, healthcare is the most vibrant growth sector in the US economy. Even if it lives on borrowed money and is bankrupting the nation, it’s growth!

As in every debacle, there are a few winners. The oil price plunge is ascribed in part to soaring US production, which caused crude oil storage levels to spike, triggering fears, hopes, and wild speculations that they would reach capacity soon. With oil-storage fees skyrocketing, oil storage companies are awash in glory, and the entire Oil & Gas Storage & Transportation sub-sector is expected to grow revenues by 10% in Q1.

The revenue debacle has now spread to Materials and Utilities, dragging down revenues for the entire index by 2.8%: 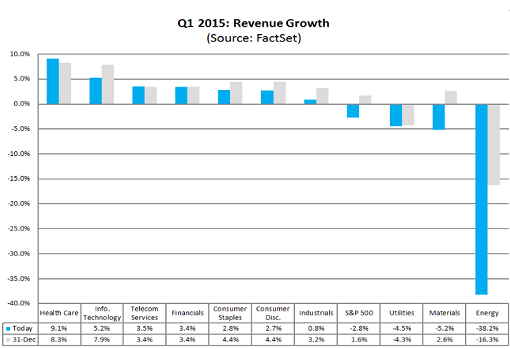 Since the beginning of the quarter, estimates of earnings-per-share growth have plunged even more, from a positive 4.2% to a decline of 4.6%, according to FactSet. The largest decline since Q1 of crisis year 2009.

These are not even estimates of actual earnings under GAAP, but of pro-forma, ex-bad-items fictional earnings. Reality is going to look worse.

The energy sector has caught the blame. Its earnings are expected to get hammered by 64%. At the start of the year, the radiant optimists on Wall Street had still propagated the idea that its earnings would only drop 30%.

Of the seven sub-industries, only the Refining & Marketing sub-sector and the Oil & Gas Storage & Transportation sub-sector are expected to show earnings growth of 23% and 3% respectively. Earnings of the other five are getting eviscerated: Oil & Gas Exploration & Production (-107%, hence losses), Coal & Consumable Fuel (-74%), Integrated Oil & Gas (-71%), Oil & Gas Drilling (-42%), and Oil & Gas Equipment & Services (-21%).

But it’s not just energy.

The earnings debacle is spreading: Utilities, Materials, Telecom Services, Consumer Staples, and IT (!) are now all expected to show declining earnings. Only Industrials, Consumer Discretionary, Financials, and Healthcare are expected to show earnings growth. The latter, in its methodical way of bankrupting the country, is expected to fatting its earnings per share by 10.5%, in a now-growth economy.

This is how drastically the estimates have changed from the beginning of Q1 (gray bars) to now (blue bars), leaving the S&P 500 earnings growth at -4.6%: 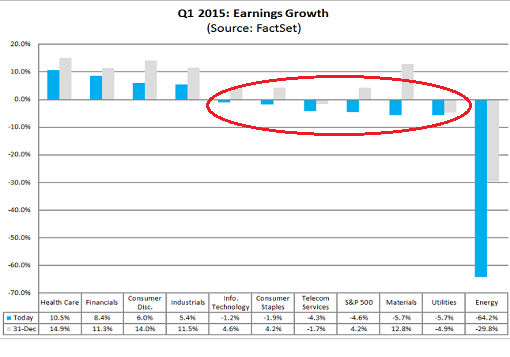 The first half looks even worse.

Estimates for Q2 are still being chopped relentlessly. As of now, after the revenue decline in Q1 of 2.8%, revenues in Q2 are expected to fall 3.1%. And earnings, after the decline of 4.6% in Q1, are expected to fall 1.8% in Q2, down from of an estimated growth of 4.2% and 5.3% respectively at the beginning of the year. But Q2 hasn’t started yet, and estimates will get slashed further to bring them closer to a number that companies can actually “beat,” the key phrase in this silly Wall-Street game.

So for 2016, revenues are expected to rise by a phenomenal 6% – in this economy? – and earnings are supposed to soar by an even more phenomenal 12.4%. It’s the ancient principle of using hype and forward-looking, pro-forma, ex-bad-items fiction to support by hook or crook the ludicrous valuations of these no-growth companies in a slow-growth economy where year after year, valuations move further away from any sense of reality.

But in the American heartland, real businesses are already getting very nervous. “We don’t see the economy being as strong as portrayed in the national media,” the Kansas City Fed quoted one of them. Read…  You Should See the Reasons Cited for the Plunge of the Kansas City Fed Manufacturing Index