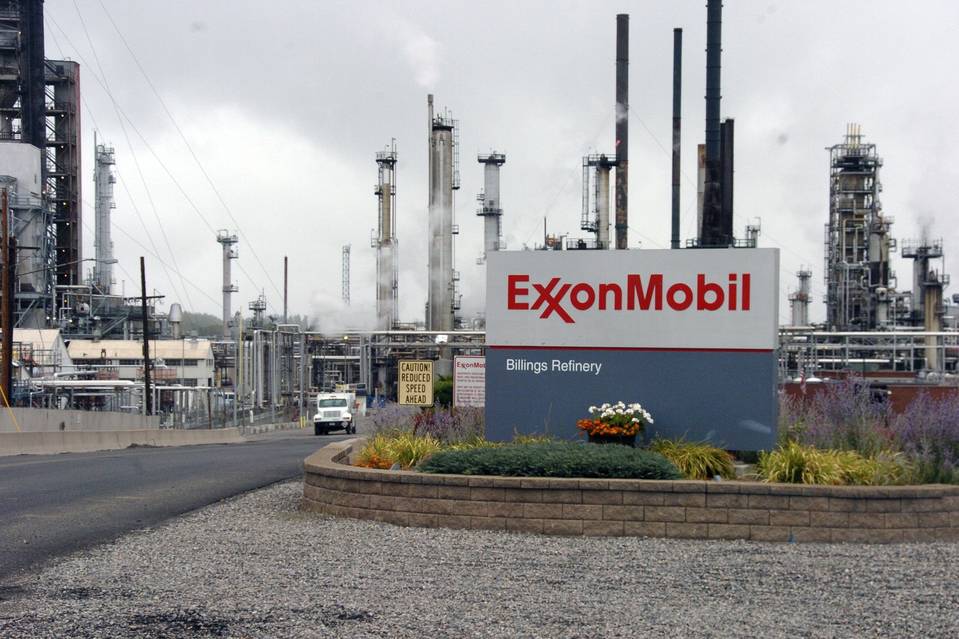 Analysts have reduced their third-quarter earnings forecasts for Exxon Mobil Corp. since the end of June. The energy sector has been a major drag on overall S&P 500 earnings in recent quarters. PHOTO: MATT BROWN/ASSOCIATED PRESS
The third quarter was supposed to be when earnings growth returned to U.S. companies. Not anymore.

Companies in the S&P 500 are now expected to report an earnings decline for the sixth consecutive quarter in the coming weeks, according to analysts polled by FactSet. That slump would be the longest since FactSet began tracking the data in 2008.

The prolonged contraction has raised questions about how far stocks can rise without corresponding strengthening in corporate earnings.

As recently as three months ago, analysts estimated U.S. corporate earnings growth would return to positive territory by the third quarter. As of Friday, they were predicting a 2.3% contraction from the year-earlier period.

Many of the factors pressuring U.S. corporate earnings in recent quarters—including a stronger dollar and falling oil prices—have abated in 2016. The WSJ Dollar Index, which measures the U.S. dollar against a basket of 16 currencies, is down 4% this year, versus up 8.6% for all of last year, and the price of U.S.-traded crude oil has risen 20% in 2016, rebounding from its extreme lows.

Still, those moves haven’t been enough to project an end to the earnings recession.

DuPont Co. was a drag on the projected earnings-growth rate for materials companies, while Ford Motor Co. has contributed to a decrease in earnings expectations for consumer-discretionary firms, according to FactSet.

For the third quarter, the energy sector is projected to yet again report the largest year-over-year earnings decline of all sectors in the S&P 500, with a drop of 66% expected. It would mark the eighth consecutive quarter that energy companies in the index have reported a year-over-year fall in earnings, FactSet data show. 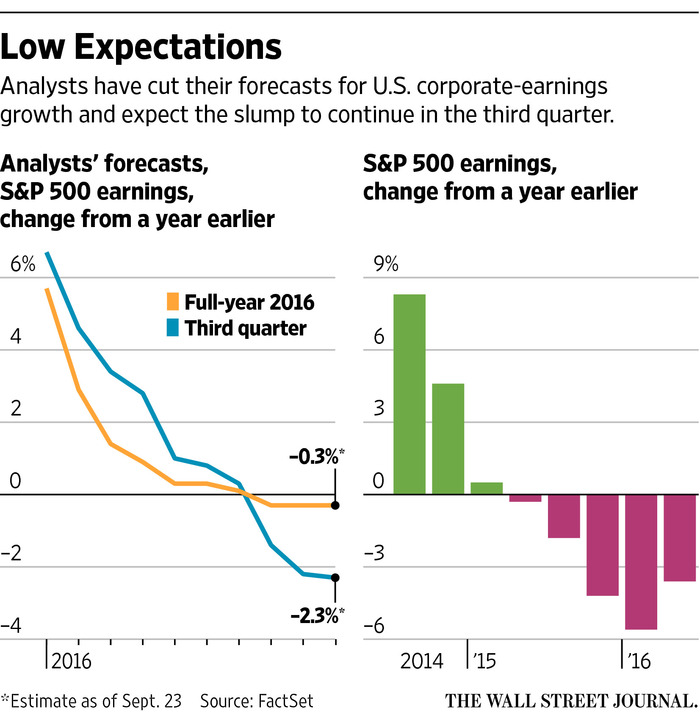 In four of the past five quarters, S&P 500 earnings would have been positive if the energy sector were stripped out, according to FactSet.

Declining earnings forecasts don’t necessarily mean falling stock prices. On average, earnings estimates are revised lower during the three months ahead of the quarterly reporting season, according to FactSet.

Those revisions make the forecasts easier to beat, and actual earnings tend to be better than the forecasts. Earnings growth for the S&P 500 comes in on average 2.8 percentage points ahead of estimates, FactSet data show.

Revenue growth, meanwhile, is set to return for companies in the S&P 500 for the first time since the end of 2014, according to analysts polled by FactSet. Nine of the 11 sectors are predicted to report year-over-year sales growth during the third quarter. Consumer-discretionary companies lead with a projected rise of 8.7%.

Declining corporate earnings haven’t kept stocks from reaching highs. Since the start of this period of earnings contraction, the end of March 2015, the S&P 500 has risen about 4.7% and hit 15 fresh records.

One reason stocks continue to climb even as earnings shrink is easy-money central-bank policies. Some investors are using the resulting low government-bond yields as justification to buy more stocks in a search for yield, pushing up major indexes.

“Investors don’t care about fundamentals as long as central banks have their back,” said Jack Ablin, chief investment officer at BMO Private Bank, though he added that he finds the lack of earnings growth for such a long period is “certainly problematic.”

Some analysts say they aren’t concerned with the stock market’s gains in the face of earnings contraction—a dynamic that stretches price/earnings ratios, a metric investors use to evaluate whether stocks are overpriced—because the gains have been relatively slow and steady.

The S&P 500 is trading at 19.7 times its past 12 months of earnings, above its average of 16 times earnings over the past decade, according to FactSet.

However, stock prices are meant to be forward looking, analysts say. And indeed, analysts now expect earnings growth to resume in the fourth quarter.

“The market is anticipating we’re going to see a resumption of earnings growth, and I think that’s the right perspective,” said David Lefkowitz, senior equity strategist at UBS Wealth Management Americas. “If we were talking about an earnings outlook where earnings were going to be contracting for as far as the eye can see, I’m fairly confident that the market wouldn’t be within a hair’s breadth of an all-time high.”