If you’re committed enough, you can make any story work. I once told a woman I was Kevin Costner, and it worked because I believed it’ – Saul Goodman – Breaking Bad

“As calamitous as the sub-prime blowup seems, it is only the beginning. The credit bubble spawned abuses throughout the system. Sub-prime lending just happened to be the most egregious of the lot, and thus the first to have the cockroaches scurrying out in plain view. The housing market will collapse. New-home construction will collapse. Consumer pocketbooks will be pinched. The consumer spending binge will be over. The U.S. economy will enter a recession.” – Eric Sprott – 2007

In Part One of this article I provided the background of how our current debt saturated economy got to this point of ludicrousness. The “crazy” bloggers, prophets of doom, and analysts who could do basic math were warning of an impending financial crisis in 2006 and 2007, which would be caused by the issuance of hundreds of billions in subprime slime by the Too Big To Trust Wall Street shysters. Subprime mortgages, auto loans, and credit card lines provided the kindling for the 2008 conflagration.

Under normal circumstances we wouldn’t have seen such irrational, reckless, greedy behavior from Wall Street for another generation. But, Wall Street didn’t have to accept the consequences of their actions. They were bailed out and further enriched by their puppets at the Federal Reserve, the lackey politicians they installed in Washington D.C., and on the backs of honest, hard-working, tax paying Americans. The lesson they learned was they could continue to take excessive, reckless, unregulated risks without concern for losses, downside, or consequences. 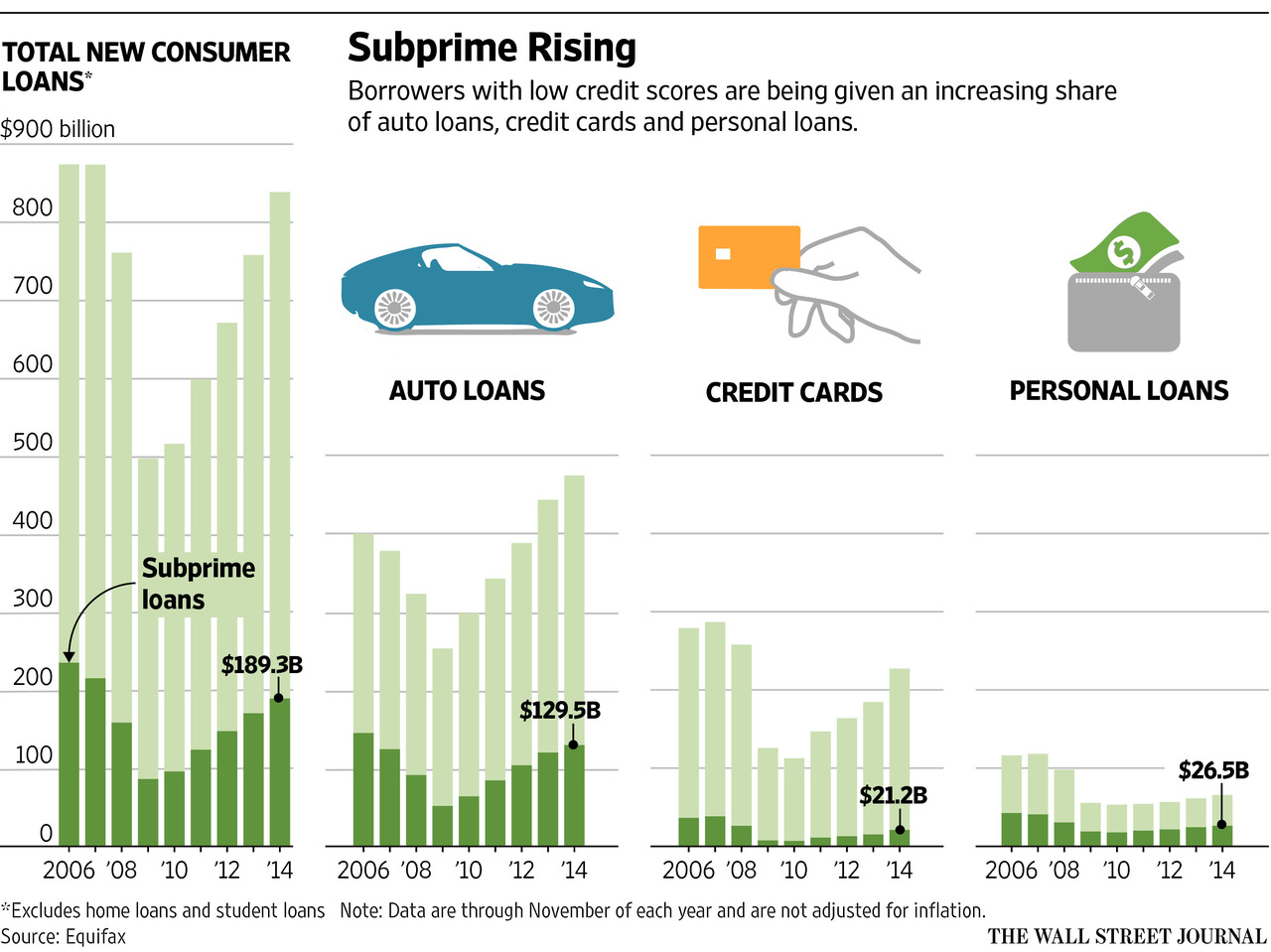 In reality, the Fed and government have worked in tandem with Wall Street to create the subprime economic recovery. The scheme has been to revive the bailed out auto industry by artificially boosting sales through dodgy, low interest, extended term debt. With the Feds taking over the entire student loan market, they have doled out hundreds of billions to kids who don’t have the educational skills to succeed in college, in order to keep them out of the unemployment calculation.

That’s why you have a 5.7% unemployment rate when 41% of the working age population (102 million people) is not working. The appearance of economic recovery has been much more important to the ruling class than an actual economic recovery for average Americans, because the .1% have made out like bandits anyway. Who has benefited from the $650 billion of student loan and auto debt disseminated by the oligarchs in the last four years, the borrowers or lenders?

The Fed chart that reveals how warped the economy has become in the last few years is the one showing number of loan accounts by type over the last twelve years. For the first decade, the number of mortgage loans was greater than auto loans by a significant margin. Since the beginning of 2013 the number of auto loans has soared past the number of mortgage loans. And this happened during a supposed housing recovery. Have people decided living in a car is a better deal than living in a home? Why the surge in auto loan accounts?

The avalanche of auto loans was initiated by the Obama administration and their fully controlled bankrupt finance company Ally Financial (formerly known as the upstanding subprime lenders GMAC, Ditech, ResCorp) after the American taxpayer handed them $12 billion of TARP. The Feds took control of Ally in early 2009 and decided to maintain control of this entity longer than any other TARP recipient, until 2014. I wonder why?

As the biggest lender in the auto space and main lender for bailed out automakers GM and Chrysler, doling out high risk loans to boost auto sales would make Obama look like a genius for saving GM and keeping their union workforce voting Democrat. The Wall Street banks couldn’t let Ally Financial capture all the easy profits. The Fed’s ZIRP gave the green light for auto lenders to borrow billions at 0% and lend it out to anyone who could fog a mirror. And they have. When you borrow at 0% and lend to deadbeats at 10%, you can deal with substantial losses knowing you always have the Yellen Put when things blow sky high.

The Fed report downplayed the 13% surge in seriously delinquent auto loans in one quarter, from 3.1% to 3.5%. This is just the seriously delinquent loans and amounts to $33 billion. The chart below paints a dire picture of the future. The financial industry originated $102 billion of new auto loans in the fourth quarter, but $20 billion entered delinquency status. That is almost 20%. During 2012 this percentage was closer to 12%, as only $10 billion entered delinquency status. I wonder if the tripling in issuance of subprime auto loans since 2009 has anything to do with the delinquencies. Subprime auto loan issuance has swelled from 20% of all loans in 2009 to north of 30% and are approaching the pre-disaster era of 2006. Auto loans to consumers rated below prime comprised 38.7% of all outstanding loans as of the third quarter 2014. We all know how the last subprime boom worked out. The NYT sums up the current situation:

Think about that for a second. One out of twelve subprime auto loan borrowers was delinquent on their payments in the first nine months of their loan. I guess they thought they could use their SNAP card for car payments. Let them eat Cadillac Escalades. 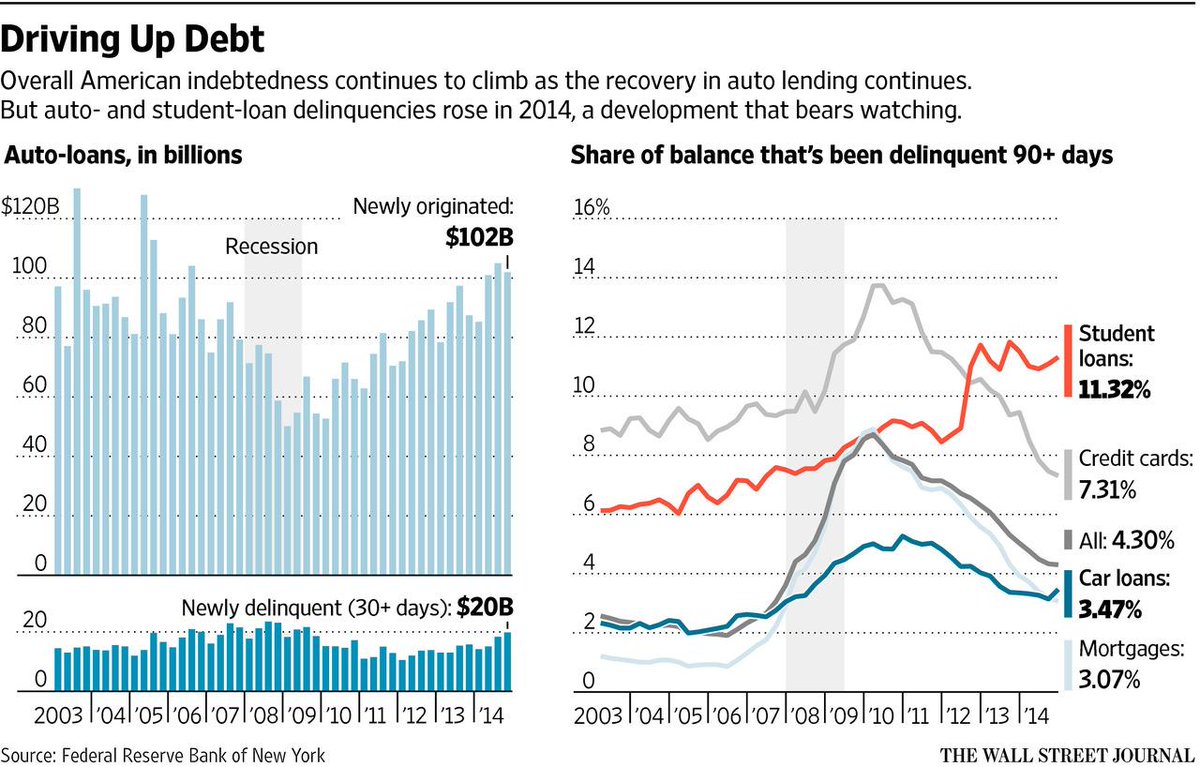 The auto loan delinquency rates reported by the Fed, captured credit reporting agencies (Experian, Equifax), and the corporate mainstream media dramatically underestimates the true picture. In a scathing recent report, The Center for Responsible Lending dismantles the positive storyline being spun by the purveyors of propaganda at the Fed and their Wall Street owner peddlers of debt. Some pertinent facts in the report are as follows:

The Federal Reserve used to report on a monthly basis regarding the average LTV, maturity, and average amount financed for all car loans. They abruptly stopped reporting this info as of 2012, just as the subprime auto boom launched. They have provided no rational for stopping this reporting. The data is readily available and the Center for Responsible Lending details the data in their report. It’s clear why the Fed doesn’t want to provide the data – because it proves how outrageously reckless the banks have become under the Fed’s regulatory reign of nonchalance. The last time the Fed reported this data in 2011, here was the data:

That was then. This is now:

It is mind bogglingly ludicrous for financial institutions to loan 110% of the value of a vehicle over a seven year term when the vehicle depreciates by 10% the moment you drive it off the lot and 50% in the first three years. It is even more preposterous for these financial institutions to loan 126% of the value of a vehicle for 71 months at 10% interest to someone without the means, income, or willingness to repay the loan. But, these are the current terms offered to subprime borrowers. Would a rational lender who followed basic risk management methods ever make such a high risk loan, without trusting the Federal Reserve will rescue them when these loans blow up in their face? Could this massive mal-investment occur if the Fed’s QE and ZIRP monetary policies were not propping up Wall Street? Not a chance. So, we know who wins. But who loses?

Subprime loans are used by sophisticated Ivy League educated MBA bankers to lure over-indebted, lower income, lower educated, easily manipulated Americans with bad credit (they’ve defaulted before), into high interest auto loan debt with promises of easy payments on their very own luxury SUV. It’s like Christmas has arrived and Ally Financial is Santa Claus. The longer the term, higher the loan amount, and the higher the interest rate, the better for the lender – because the lender isn’t bearing the risk. Sound familiar? It’s back.

The subprime loan securitization market is booming again. Who cares if Ally, GM Financial, and a slew of other subprime lenders are under investigation by the DOJ for the underwriting criteria they used on securitized subprime auto loans as well as the representations and warranties related to these securitizations. Private equity firms are filling the yield gap with good old fashioned slicing and dicing of subprime auto loan tranches – and get this – many rated AAA by the upstanding rating agencies S&P and Moodys. How could this possibly go wrong?

It seems Blackstone isn’t only the lead player in the buy to rent housing price scheme, but they are a major player in the subprime auto loan scheme. Wolf Richter explains:

Subprime auto lender Exeter Finance, which PE firm Blackstone Group bought in 2011, exploded its portfolio from $150 million to $2.8 billion in three years. It has now become America’s third-largest issuer of subprime auto-loan structured securities. It too received subpoenas from the DOJ and other agencies. And it has been losing money for three years. American Banker took a look at a $500-million securitization the company sold last August and found a doozy:

The average APR on those loans was 18.59%. The original term length was 70 months. 75% of these loans had a loan-to-value ratio of over 105%. Eighty-one percent of the borrowers had a FICO score of below 600. And yet some of the securities that these loans are turned into are rated AAA.

The desperate reach for yield in a zero interest rate environment created by the Federal Reserve has generated this latest subprime disaster in the making. The Federal Reserve’s only tool is to create new bubbles when their old bubbles cause hundreds of billions in damage to the real economy and real people. These toxic subprime auto loan securities are being bought by pension funds, life insurance companies, and mutual funds in a frantic effort to reach their yield goals when 10 Year Treasuries yield 2%. When it all goes to hell, little old ladies, pensioners, and conservative investors will be screwed again. It’s so clear, even the Fed can see it coming.

At lower-rated and unrated nonfinancial businesses, however, leverage has continued to increase with the rapid growth in high-yield bond issuance and leveraged loans in recent years… new deals continue to show signs of weak underwriting terms and heightened leverage that are close to levels preceding the financial crisis. – Federal Reserve Quarterly Report

If you think the subprime borrowers in the auto market are high risk, you haven’t seen anything yet. In Part Three of this article I’ll address the student loan debacle and the coming worldwide debt implosion which will change the world forever.