You know the drill.

But when it comes to identifying what’s most likely to present a major problem (i.e. the risk factor that has the best chance of playing out and wreaking havoc) one would be inclined to say that a junk bond meltdown is a good candidate.

The influx of money into HY – attributable in part to the proliferation of more esoteric ETFs and investors’ never-ending quest for yield – has gone a long ways towards keeping primary markets open to distressed issuers. Like US O&G companies who, by virtually of their persistent cash flow shortfalls, are for all intents and purposes perpetually insolvent and rely solely on capital markets to fill their funding gaps.

Well now, the party is over and the energy defaults are beginning, which means capital markets for junk bonds have slammed shut. Need proof? Have a look: 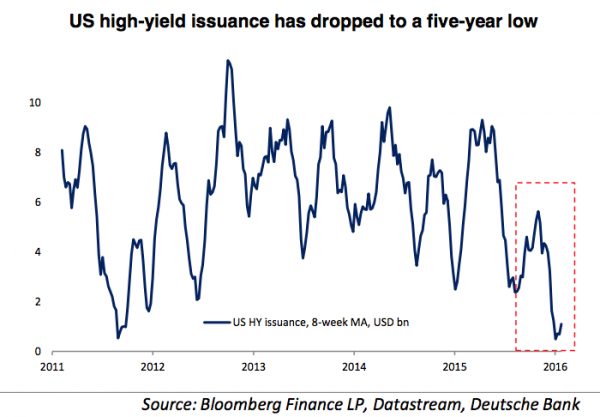 On Thursday, we got still more evidence that the market’s appetite for junk is waning when Goldman ran into trouble trying to get the financing done for the Vista/Solera deal.

Solera – which is being sold to PE Vista Equity Partners – didn’t have any trouble with a $1.9 billion leveraged loan offering last week (it was actually oversubscribed), but when Goldman tried to price $2 billion in bonds intended to help fund the LBO, things got dicey. Goldman was already figuring on pricing it at 10.75% -11% (which is obviously a rather punishing rate in the first place and was up from initial guidance of 10%) but by this morning, the bank had only managed to drum up about $1 billion in interest, causing pricing expectations to move above the expected range.

“The difficulties are the latest sign that it is getting harder for heavily indebted companies to borrow,” WSJ noted this afternoon. “Junk-rated firms have issued just $11.6 billion in bonds so far this year, down from $48.5 billion during the same period last year and the lowest total since 2009 during the depths of the financial crisis, according to Dealogic.”

As The Journal goes on to note, this wasn’t the first sign that things are starting to fall apart. “In recent weeks, LeasePlan International NV shelved a €1.55 billion ($1.71 billion) bond sale after failing to get enough investor interest. Banks were forced to fund Endurance International Group Holdings Inc.’s acquisition of email-marketing firm Constant Contact Inc. after failing to find buyers for $1.1 billion of buyout debt.”

So, yeah. You can kiss the M&A boom goodbye, because it won’t be long before HY blows up completely and the contagion spreads to IG, creating a whole host of “fallen angels” who will then also lose market access, and so on, and so forth in a messy default cycle that will not only make this year far, far worse for mergers than last year’s $4.3 trillion bonanza, but will also spell doom for any junk-rated corporates that need to refinance to stay afloat.

As for the Solera deal – better luck tomorrow. Maybe make it 12% and give investors the weekend to think it over.