In spite of strong withholding tax collections, other tax data show that the US economy is stalled or even contracting.

Withholding tax collections grew in January. The year to year nominal growth rate had risen to +8.3% at the end of the month in the post Trump dysphoria, but that abruptly reversed over the first 2 days of February. It was one of the sharpest 2 day drops ever.  That sudden drop broke a short term uptrend in withholding tax collections.  The nominal growth rate fell to +5% in the first couple days of February. That suggests real growth of around 2.5% based on recent trends in wage growth. 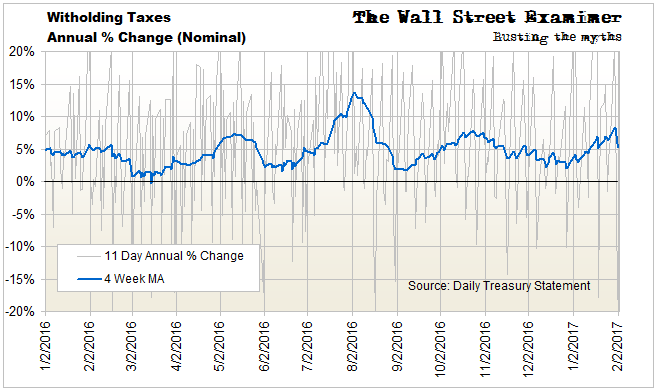 Withholding tax growth fluctuates in a cycle lasting about 2 1/2 to 4 months. This is not seasonal. There is no seasonality in same day year to year comparisons. This cyclical fluctuation is part of the normal pattern of any economic process. Neither growth nor recession happen in a straight line.  The economy expands faster for a few weeks on an increase in spending and an uptick in employment, then slows down for a few weeks when this spending exhausts itself. When that process reaches its nadir, people and businesses start spending again.

The process averaged out to a nominal growth rate of around 4.4% in withholding tax collections over the past 3 months. That suggests that the US economy is growing at a rate of only roughly 1.9%.

Other data, such as Excise taxes, Corporate Taxes, and Individual Income Taxes not Withheld (basically small business sole proprietors), are not growing at all. January data in those segments continued a pattern of weakness seen over the latter half of 2016. That period saw a persistent trend of negative year to year comparisons.

Contrary to the popular Wall Street myth, investors and traders in the aggregate have no crystal balls. They are no smarter as a group than they are as individuals. They can’t predict or discount the future with any degree of proficiency. Stock prices rise for as long as there’s excess liquidity in the system. Employers follow that signal. That may, and often does, bear little relationship to real economic growth. Asset inflation often does not reflect reality.

There’s evidence that that’s the case today. Most real time, unmanipulated, tax data shows that the US economy is no longer growing.

Withholding collections peaked toward the end of January, followed by a sharp drop. This size of the downtick over the past few days is unprecedented. We’ll have to see if it continues. If it does, it would mean that the economy has slammed on the brakes.

I would not be surprised to see this. I think that normally politics plays little role in changes in the economy over the short to intermediate term. Most political changes tend to be both well telegraphed as well as incremental in their impact on the economy. I believe that the effects are normally superficial on corporate profits and the markets in particular. But today large and small businesses are watching in shock and dismay as the lunatic fringe takes control of the Executive Branch of the US Government. As a result there’s a real possibility that we could see a rapid economic decompression as confidence in the system collapses. Some corporate CEOs particularly in the tech industry, are already rattling their cages.

Taxes other than withholding have been signaling economic weakness for months. Non withheld individual estimated taxes due in mid January for the fourth quarter of 2016 were down by 3% year to year. These are taxes collected mostly from small business sole proprietors. It would cover workers in the “gig economy” who work as independent contractors. These declines have now persisted since last April. That drop already suggested a big year to year decline.

Excise taxes in January declined by 2.6%. That follows a decline of 2.9% in December and a 6.3% decline in November. Large payers are required to pay at mid month and the last business day of each month for the period a half month prior. Taxes are based on unit volume, not prices. Therefore they may be an accurate gauge of economic activity independent of any need to adjust for inflation. Excise taxes include gas and aviation fuel taxes, and sin taxes, such as on alcohol, tobacco, and firearms.

Excise tax collections lag by at least 15 days, with smaller businesses having an even bigger lag as their reporting is less frequent. Therefore, current figures reflect December-January economic activity, rather than for all of January. But they do include the post election Trump bump we saw in the stock market.

The persistence of the negative numbers in this series raises real questions about the true underlying strength of the US economy. The latest figures suggest that the stock market Trump bump did not translate to the economy.

So if corporate, individual, and excise taxes are all declining, how do we explain the increases in withholding taxes? I like to say, “Employers are always the last to get the news.” There’s a long history of employment data following the direction of stock prices, particularly when stocks reverse. So I am skeptical of the reported gains in jobs. If the jobs numbers are accurate, they can continue to trend higher only as long as stock prices keep rising. That will cut into corporate profits. Excise taxes, income taxes paid by small business sole proprietors, and corporate income taxes, simply do not support increasing employment. If final sales are not increasing (and retail sales data confirms that they are not) then ultimately employers must stop hiring.