Recap Of An Ugly Week: What the Heck Just Transpired in the Global Markets?

An ugly week, topped off by an even uglier Friday. It started going off the rails in Europe. Greek stocks had crashed 20% in the prior three days, and Friday brought no bounce. There were fears of a renewed debt crisis, or even a Grexit, and the possible break-up of the Eurozone. If Greece would be allowed to exit, maybe Italy, Spain, or France would be allowed too.

It didn’t help that Ukraine is marching vigorously toward a default unless it gets many more bailout billions from taxpayers around the world – to be absorbed in record time by oligarchs and whoever holds power at the moment. Russia’s government warned of a recession in 2015, given the sanctions and the plunging price of oil. Russians are fretting about their rubles that have lost their footing entirely. China’s economy is approaching what is stall speed for China. Japan’s economy is in a deep recession while drowning in freshly printed money….

Friday was particularly unsightly. That lovely last-minute mysterious upward burst that we have become accustomed to and that has bailed out so many Fridays in this central-bank-powered multi-year rally? We don’t care where that burst comes from, we just rely on it. But this Friday, the bottom fell out at the end of the day. This left the S&P 500 down 1.6% for the day and 3.2% for the week, off the record close Friday a week ago. It was the worst weekly drop since May 2012.

This hourly chart of the S&P 500 for the week shows the drama of the last hour. Note how the S&P 500 dropped 52 points, or 2.5%, in a day-and-a-half from its glorious intraday high on Thursday. 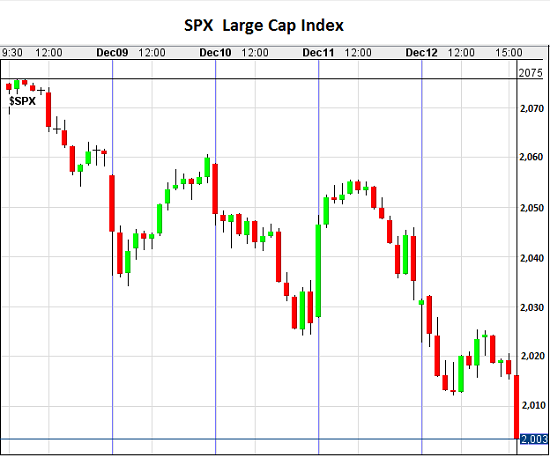 The relentless collapse of the price of oil – down another 12% during the week – is mauling the energy sector in the S&P 500. These are the large caps, not the small and mid-caps that have gotten eviscerated. Still, they’re down 8% for the week, the worst sector in the S&P 500. They lost 20% over the last three months. And they’re down 16% year-to-date.

This sort of debacle wouldn’t be that unusual under normal conditions, but these aren’t normal conditions. These are conditions where markets can only go up, where no matter how crazy the valuations, up is the only option. Bears have gotten massacred ceremoniously time after time until there weren’t any left. After years of hunky-dory complacency, why this sudden fretting by the stock markets?

Globally, a similar scenario played out. Doug Short of Advisor Perspectives summarizes it this way:

The world market rally came to an abrupt halt this week with seven of the eight indexes on my watch list posting declines ranging from -3% to -7%. In fact, the -4.01% average of the eight is the worst weekly performance of 2014. China’s Shanghai Composite took the top spot with a microscopic 0.02% gain. The three European indexes were the biggest losers, with France’s CAC 40 in the bottom spot with its -7.03% plunge for the week.

And that price of oil…. On Friday, the International Energy Agency cut its forecast (again!) for global demand growth next year, this time by 230,000 barrels a day, to 910,000 bbl/d. Much of the lagging demand stems from Russia, the Middle East, and Brazil whose economies are being rattled by the plunge in commodity prices.

That feeble demand growth meets booming supply – largely from drillers in the US. And they’re pumping oil as fast as they can. They borrowed a pile of money to drill these wells. Now they need the cash flow from these wells to service their debts and survive. They can’t afford to cut production, no matter how low the price. Some of their production is hedged. But even the rest: the lower the price, the more they have to sell just to meet to their cash flow requirements.

Production isn’t what they’re going to cut. Instead, they’re slashing new projects and capital expenditures. This way, they can survive the low prices until the junk-bond holders get antsy. And those cuts won’t impact production for months.

This chart from the EIA confirms it: drillers in the Bakken in North Dakota, the epicenter of the shale boom, haven’t cut production, despite the plunging price of oil (blue line). On the contrary, production (red bars) has continued to soar: 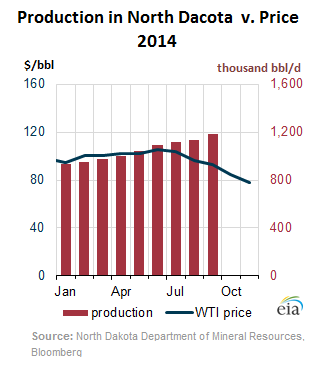 Low oil prices are good for consumers who drive a lot, and it brings down prices of related products. But they are wreaking havoc in the American oil patch. The shale revolution was funded with debt – much of it junk rated. That debt is now deteriorating. And companies that need more money are hitting a wall of resistance. Defaults will follow. And the energy junk-bond debacle has already begun to ooze into other areas.

Low oil prices also pose risks to economies of producing countries around the globe. The first casualty might be Venezuela. Its dollar bonds have collapsed to where the 2-year yield has jumped to 60%.

What we saw this week is that investors have suddenly started to think twice – for the first time in years. And perhaps, they’re also realizing that the Fed won’t restart QE at every squiggle in the markets, and that instead, raising interest rates next year is the hot topic. Not if, but when. And how fast. That idea – that very insane idea – that markets would somehow have to stand on their own feet, with all this chaos going on around them, well, it made for a nasty week.

Wall Street made a killing on the fracking and offshore booms, but now the tide has turned. Read…   Oil Bust Contagion Hits Wall Street, Banks Sit on Losses