The average cost for home builders to comply with regulations for new home construction has increased by nearly 30% over the last five years, according to new research from the National Association of Home Builders.

Regulatory costs such as local impact fees, storm-water discharge permits and new construction codes, which have risen at roughly the same rate as the average price for new homes, make it increasingly difficult for builders to pursue affordable single-family construction projects, the group argues.

“It really makes it hard to satisfy the lower end of the market, which is a lot of first-time buyers,” said Paul Emrath, vice president for survey and housing policy research at the NAHB, who conducted the survey of about 400 builders across the country.

The cost of regulation imposed during the land development and construction process on average represented $84,671 of the cost of the average new single-family home in March. That is up from $65,224 in 2011, the last time the home-building industry group conducted a similar survey on regulatory costs.

The 2011 and 2016 surveys used a different panel of home-building executives, who were asked to calculate the costs of environmental mitigation, impact fees and other approvals as a percentage of construction or lot development costs. Both surveys showed that regulatory costs represented about the same percentage of the final price tag of a new home—24.3% this year versus 25% in 2011.

Other recent surveys have also suggested that builders are contending with steeper costs than they have in the past. A study this week from housing research firm Zelman & Associates found that local infrastructure “impact fees” have increased by 45% on average since 2005 in 37 key home building markets across the country, to about $21,000 per home. 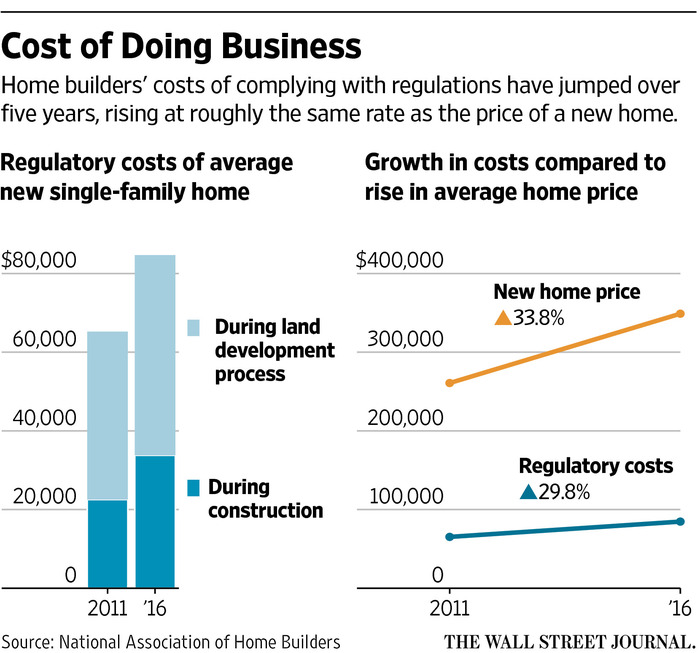 John Burns Real Estate Consulting of Irvine, Calif., released a survey last month that detailed a range of new regulations and fees in many jurisdictions that didn’t exist a decade ago. Among the examples cited: $7,500 to $15,000 in additional costs per home to comply with tree-planting requirements in some Georgia jurisdictions, and $5,000 in additional costs for each lot to prevent storm-water runoff.

To be sure, complaints about regulation are nothing new to the home-building industry. The NAHB has long been active in trying to beat back new requirements that could cause more headaches for its member builders, including a long-held stance against requirements that would make sprinklers mandatory in single-family homes.

But even in Texas, long known as a business-friendly state with far fewer regulations, builders said they have had to factor in a raft of additional costs into their business models.

Lance Wright, a partner at Houston home builder CastleRock Communities, said local costs have been increasing by 20% to 30% for the last three years. Jurisdictions also have widely varying requirements, he said, making it more difficult to keep costs down through standard designs and floor plans.

“We’ve always had very, very affordable housing compared to other parts of the country, but you’re definitely starting to see that gap lessen,” said Mr. Wright. “To maintain our margin, we have to pass it on. So the customer is paying for it, but they’re not really getting any benefit from it.”