Retail Sales Continue To Swoon In France And Italy, But Who Needs GDP—Their Bonds Have Draghi!

The Markit Eurozone Retail PMI which tracks month-on-month changes in like-for-like retail sales read 50.0 in June, little-changed from May’s 49.9 and indicative of a flat trend in sales. Compared to the situation one year earlier, trade was down moderately during June, according to firms.

Commenting on the data, Phil Smith, economist at Markit which compiles the Eurozone Retail PMI survey, said: “The latest retail PMI data show a flat trend in eurozone retail sales forming, a relative positive in the context of the recent prolonged downturn. The stagnation hides a growing divergence in country – level performance, however. The gap between Germany’s headline retail PMI and the average of those for France an d Italy has increased throughout the second quarter to the widest for almost a year. Any hopes that consumer spending in France and Italy had turned the corner are looking a little premature.”

Eurozone retail sales were supported by continued growth in Germany, where trade rose sharply on the month and to the greatest extent for almost three-and-a-half years. In stark contrast, France’s retail sector showed renewed weakness as sales there fell solidly, offsetting back-to-back marginal increases in the first two months of the quarter. Moreover, June’s decrease was the sharpest so far in 2014. A deepening downturn was meanwhile seen in Italy, where the rate of decline in sales accelerated for the second straight month to the fastest since February. At the aggregate level, retailers’ purchasing activity followed the trend in sales and was unchanged in June after a fractional decrease mid-quarter. Stocks of items for resale meanwhile rose for the seventh straight month, and at the fastest rate since April 2011. This was largely due to sales being markedly lower than targets on average. 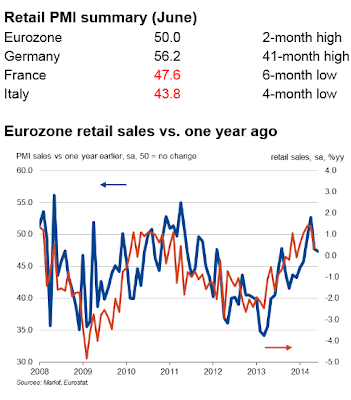 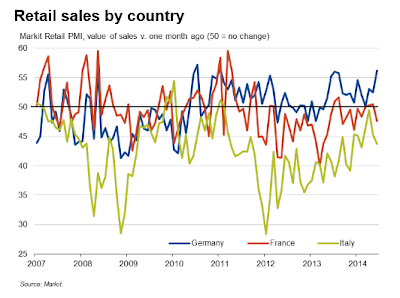 The notion that Germany can keep bucking the trend is fallacious. There is no “relative positive” to be found. Rather, when Germany slows, things will go to hell in a hurry.