For those that have been following this chart for a awhile you can just skip down to the chart and following commentary. And as always: If someone says they “know” precisely what will happen next. My only advice would be to run – don’t walk. And the quicker, the better.

For those who are new: whenever the markets have either rallied or fallen in dramatic fashion is when I’m asked the most, “What do you think of the latest moves?” So, in response to this I began sharing the following chart and commentaries at precisely times like these. I make these commentaries in real-time. Where they go from here is anyone’s guess. That said, the chart speaks for itself as the consequential moves at these defining points as I said, are made in real-time, before they happen, just like I’m doing now. I state my observation, and thoughts, and let the chips fall where they may. To wit:

Below is that chart as of the close tonight (being Tuesday). As you can see where I had marked “here” and “or here” with grey ovals we did in fact land squarely there where I postulated once, and if, the level directly above was breached. Then the following price action took us directly back up to about that same level and cascaded once again back down, again, to that all important “Bullard Bottom” level.

Then, as I iterated, if that level didn’t break with conviction (conviction implying a break and close well below) we would more than likely return to it again, and where it went from there was anyone’s guess. Would we go up? Or, would we go down? Which is represented by, “#8 You are here.” 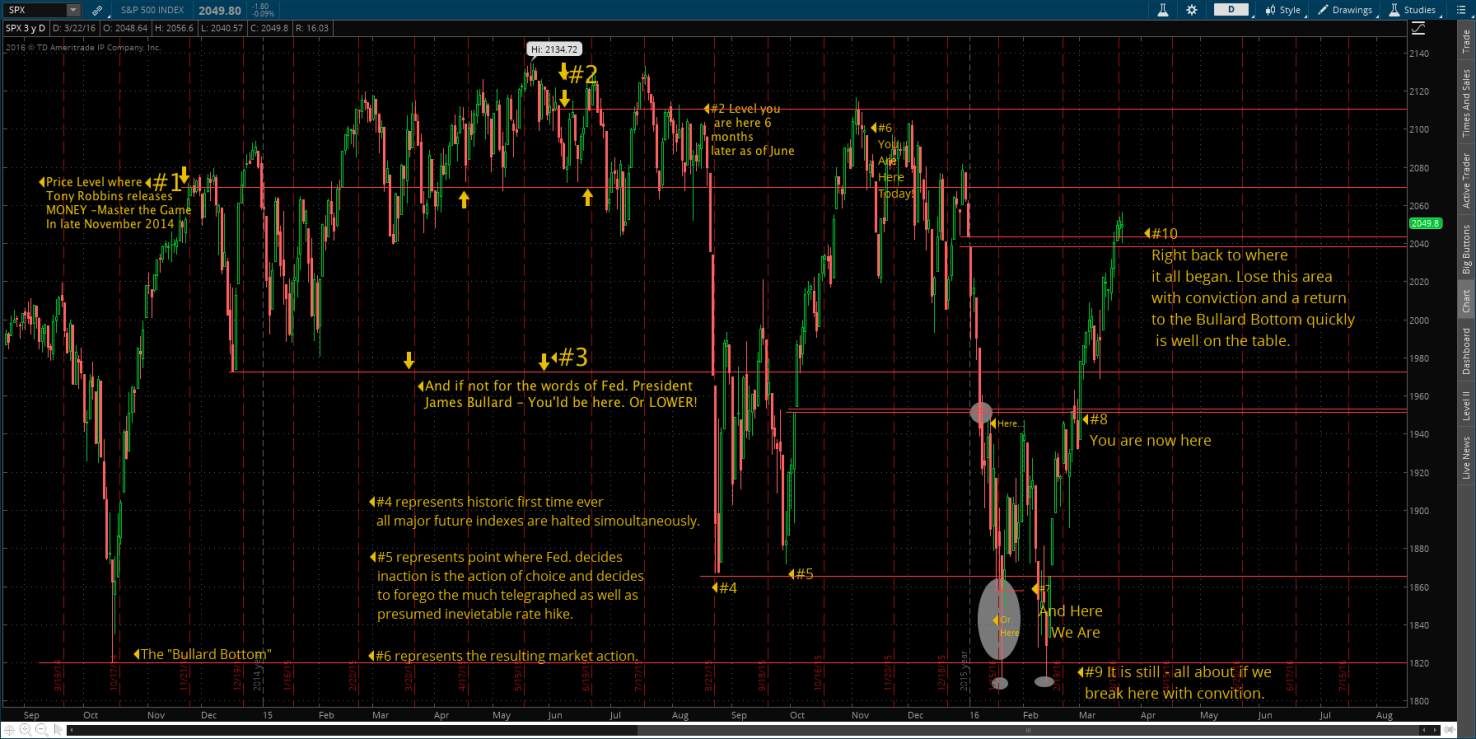 However, this level (in my opinion) is not just some arbitrary level. In a technical view I marked it with those two-line precisely because it represents a price gap as you can see. When I insinuated that first “here,” we had not touched that level and were well above it. Yet, I argued “If we get through to “here” then returning to the “Bullard Bottom” is near a certainty. Which as we now can see in retrospect, we did just that represented by “#7 And here we are.”

After piercing but not following through with a conviction styled closed we bounced precisely back up to this area (area being #8) only to return in much the same manner, and once again repeating that very same process in an almost mirror fashion as can be seen by the marks I placed with the smaller side-by-side ovals marked by “#9 It is still all about….”

Had that once again return back to that level marked by “#8” held? And had we returned in that subsequent fashion to once again test that “Bullard Bottom?” I am of the mindset the markets would have been dealt a serious shaking of confidence and the previous selloff in August of last year would have looked more like a warm up as compared to what I felt might be forthcoming if retraced and convincingly breached. But we didn’t – we went up and over not looking back.

So what does that mean as of today? Well, here is where I think we actually could be at a far more important level, as well as, turning point, with far more repercussions to the markets, as well as the economy in general, if things were to go awry here. And here’s my reasoning…

As you can see we are currently where I marked “#10” which is right back to where we were nearly 15 months ago in November of 2014 when QE 3 was shelved, and then, just a year later, in December of last year just 3 short months ago, this precise same level is the same when the Fed. actually did raise rates. Even if ever so slightly. What happened next?

The resulting market response is that gap of two lines directly beneath the “#10” and even more important – directly below as in “within spitting distance” of where we stand currently. In other words just a mere 10 points.

I am of the opinion: the only reason why we made it up here above that demarcation line marked by the “#8” was a direct result of a first trading day of the month fund manager buy-ins that ran the stops at that level, popping it up, and enabling it to close with conviction well above that level, which opened the door for more pile on and front running by both the HFT’s and others as to crush any remaining short positions as the market screamed higher into an OPEX (e.g. options expiry) cycle close of where we ended on Friday. Which is precisely where we still are here on Tuesday.

There are many things (too many to list actually) so for the sake of brevity I’ll just state the following:

First – we know via underlying measurements and market breath that the quality of this rally (i.e., the strength or conviction of buyers) has been nothing more than short covering fueled window dressing.

Second – much of that “fuel” was lit by either the Fed. punting once again on interest rate hikes. Or, a Fed. official jawboning what the market wanted to hear (or the algo’s want to read) in one form or another.

And Third – You now have terror on the “markets” mind in two forms. First: that of the serious and horrendous kind as witnessed in Europe today. And secondly – the terror that earnings season in not only once again right on the horizon – GDP is once again to be reiterated on Friday.

If for any reason the markets take the news as a signal for “It’s time to get outta Dodge!” (and no one knows if good is good, bad, or indifferent any longer) And we break back below that gap of where we are with conviction? I am of the opinion that the subsequent rally we have been on over the last few weeks or so will be retraced and not only violate that “Bullard Bottom” but will do so with conviction and spike down to levels not seen in years. Again let me iterate – and quickly! Why?

Because this latest rise has been on very, very, very, (did I say very?) tremulous grounds with outright weak demand. Therefore, if it falls apart, it will fall apart like a house of cards. We may get a “pause” in-between selloffs should it present itself. However, if it does turn I believe it will resemble when I first put the label of “#2 Level you are here….” For those who have followed this chart and my iterations you’ll remember what happened next. For those who are new…

Five days later we were at #4.

As always, it’s anyone’s guess. But that’s how I’m currently viewing these “markets” as of today. Make of it what you may.

Source: A FWIW Observation for those Wondering What I’m Thinking – Mark St. Cyr