Steen is one of the speakers at Wine Country Conference II, May 1-2 in Sonoma, California.

What follows is from Steen, I dispense with my usual blockquote style for ease in reading.

China’s flag is waving strongly these days, the direction of the economic- and political winds have changed but the present multitude of macro changes is yet to be recognized by consensus and the market.

My conclusion is this:

China will slow-down to 5% growth over next two-three years.
China will start devaluing their currency in response to Abenomics and weaker terms of trade
China will no longer be the world’s biggest investor and importer of investment goods.

The changes will during 2014 mean that:

Germany growth will go negative quarter-over-quarter in Q4 (from Q3)
World growth will come down from the recent 3.7% to less than 3.0%
The recovery will once again be postponed and the synchronic monetary policy of the major central banks will be questioned, leading to all time new lows in interest rates
Deflation will take hold in Europe and become a major risk in the US
This final third crisis in this cycle will mean equity needs to be sold off. This comes after commodities sold off in the US banking- and housing crisis, followed by fixed income during the late stage European debt crisis now I see a 30% correction in H2 of 2014 after a high is registered between 1840/1890 in the SPX.

I simply believe that China leads the world. They took the burden of world growth in their hands during the peak of the crisis in 2008/09 through the biggest fiscal expansion ever seen (550 billion US Dollars), then they increased their investment to GDP ratios securing export orders for major European and US exporters until late 2013, but since the Third Plenary Session of the 18th CPC Central Committee in November 2013 the main objectives for the political elite in China have changed from growth and export to rebalancing, fighting graft, reducing pollution and betting a small crisis now is better than a big one later.

I have already spent considerable amount of ink explaining why China is proactively seeking a small crisis rather than a big one and how China can no longer afford to keep its investment to GDP levels excessive but now China seems to have engaged in a fundamental change to its FX rates – attempting to weaken the CNY [Yuan].

China is a long term critic of Abenomics and the ensuing devaluations as Japan and Korea remains its key competitors in the export market, but until last week China held their FX tight and tightening but now things have changed: 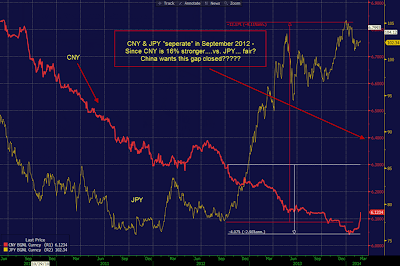 With the present geopolitical tension between China and Japan this chart is cause for concern for all of us: China no longer will play ‘nice’, they are this time ignoring “best practice” of playing paying lips service to the US-Sino relationship. Clearly Obama once again receiving the Dalai Lama in the White House is not helping the situation. That the rally in USD-CNY happened almost to the day Obama hosted the Dalai Lama is of course a pure coincidence! (They met Friday February 20th!)

China is not happy these days: The domestic economy needs rebalancing with the risk for upsetting the population and the bureaucrats. Overseas, Japan’s Abe is insisting on a stronger Japan, the US is clearly ignoring China advice on the Dala Lamai and overall the G-20 meeting had the developed world blaming the recent slow-down on the EM.

Not a good month for monetary coordination and friendly summits. The political crisis is biting ironically at a time where stock markets across the world is reaching 5, 7, and in the case of the UK 14 year highs! My old economic theory: The Bermuda Triangle of Economics is still in place: Slow growth, high unemployment and high stock market valuations kept in place by a policy where the 20% of the economy which is the listed companies and banks gets 95% of all credit and access to subsidies while the 80%, which creates 100% of all jobs, the SME’s [Small and Medium Enterprises] get less than 5% of credit and less than 1% of the political capital.

It’s the weather! The reason for the disappointing start to 2014 is all to do with the big cold in the US – well partly, I think most investors/pundits forgets that data coming in for December, January really was “born” 3,6, and 9 month before due to that specific times change in outlook, interest rates and the overall cycle. The slow-down in housing was “expected” in our models as I have constantly conveyed it to you through my economic co-op on econo-physics it has to do with spike in rates in mortgage rates between May and August 2013.

The US Consumer must have known the weather would be bad already last summer looking at this chart of Retails Sales: 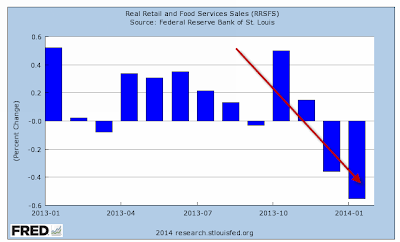 To reach the magic 3% growth we will need wages to grow 3% on their own! Not likely to happen in world of excess capacity, but never the less the pundits started the year with a 2.9% average expected growth for 2014. One month into the year, revisions came pouring in as Q1 is already reduced from 2.3% to 2.0%. The blockbuster Q4 growth of 3.2% is now expected to come in at 2.4% only!

One has to laugh at how imprecise these measures are – we watch them, take decisions on them but ultimately their reliability is really only valid six months past the first announcement. Talk about reverse engineering!

I mainly like US and Core Europe although Italy and BTP’s have done well with the power change from Letta to Renzi. The bet on rates down goes back all the way to last year.

Equity: We have had a call for peak in Q1 – admittedly I did not expect 1840 to be broken, but my partner in Economo-physics still see chance of 1870/90 before top is in place.

I submit our updated November 2013 forecast which slightly corrected still stands – The risk reward is now wrong: Upside is 50 S&P points vs. 500 points down-side. Remember a 20/30% correction happens every 4-5 years – a 10% correction twice on average in ‘normal year’. 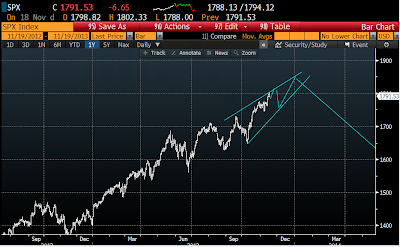 Overall the US Dollar should soon find support. The best long term gauge of the US dollar is  World Growth minus US Growth. Why? Because US dollar is the reserve currency and often the currency of choice in trade. When the world growth is slowing (now…) then the US and the US Dollar needs to pull ahead to fill the gap. This is one of the catalysts we need to monitor over the next week or two as the US Dollar Index is right on its support line: 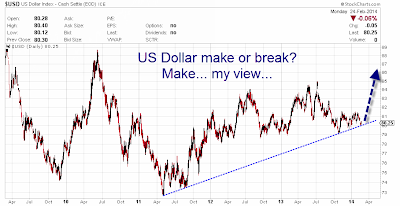 The world economic flags is still almost in vacuum but some countries are now changing the position of the flag pole to get better wind conditions.

Want to hear a live discussion of what Steen Jakobsen thinks about Europe and China?

Then come to the second annual Wine Country Conference which will be held May 1st & 2nd, 2014.

We have an exciting lineup of speakers for this year’s conference.

In addition, we expect confirmation from a number of other highly respected fund managers and speakers. This year’s event is two days and will include additional “break-out” groups.

This Year’s Cause: Autism

$100,000 of the money raised last year came from a generous matching grant from the John P. Hussman Foundation.

Some of us in the industry who have done well are making an effort to help others. John Hussman is at the very top of that list.

One of John’s kids has severe autism. This year, all net proceeds will go to support autism programs.

This event is not just another “come and hear someone talk” kind of thing. Attendees and their significant others can expect an educational, fun, and relaxed time.

Last conference, we arranged wine tours. They were a big hit. We will do so again. One of the wine estates we visited had a Bocce Ball court. On a couple of miracle shots, I won both games I played.

Stay an extra day and golf or travel. I did. The conference hotel is a fun place in and of itself.

Unlike many other conferences, you will have easy access to speakers.

Want to chat with me, Steen, John, or anyone else at the conference? You will have an easy chance.

Not only do we have an excellent lineup of speakers, you will have an opportunity to meet with them, have intimate discussions on important investment topics, with a lot of fun on the side, including wine tours and great wine.

There’s nothing like it in the investment business. And your money goes to a great cause! What can be better?