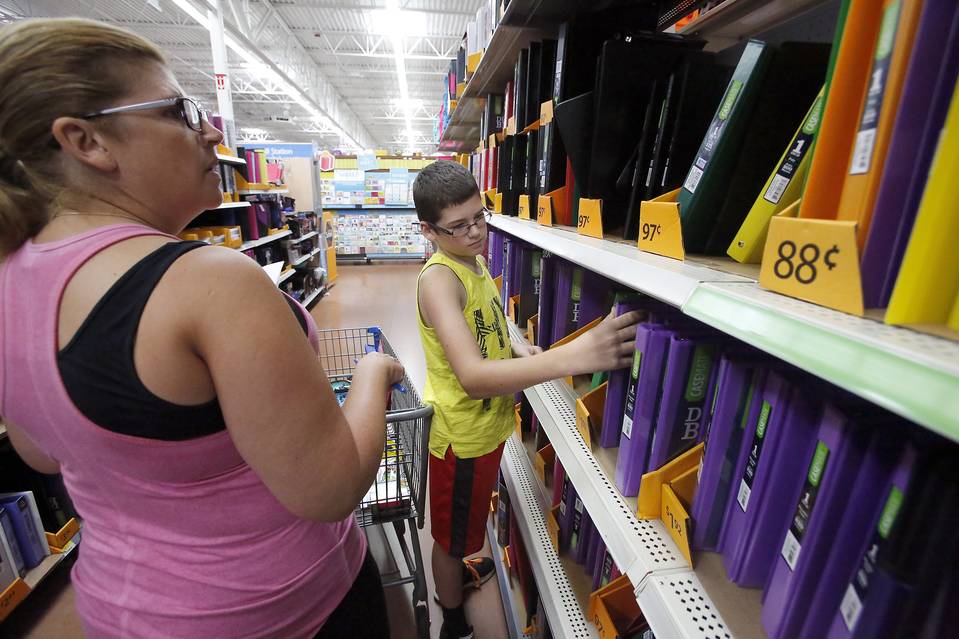 Recent data show few signs of stronger momentum for consumer spending, manufacturing output or hiring. That, along with inflation that remains soft, has many other economists expecting the Federal Reserve to hold rates steady at its policy meeting next week. PHOTO:BRIAN HILL/DAILY HERALD/ASSOCIATED PRESS
Cautious consumers, retrenching manufacturers and scant signs of inflation are diminishing optimism about a breakout in economic growth in the final stretch of the year.

Recent economic gauges, including evidence of a slowdown in August hiring, suggest the economy could be constrained for the rest of the year to a growth rate only slightly above the expansion’s overall 2% pace—the weakest of any since World War II.

Forecasters long expected an acceleration in the economy starting in the summer after nine months of economic growth around a 1% rate. The uptick was expected to deliver firmer wage growth and price gains, and put Federal Reserve policy makers in a position to lift the central bank’s benchmark interest rate by this month.

Retail sales, a strength of the expansion, have slowed, and industrial output remains in contraction. Meanwhile, businesses have slowed inventory building sharply.

“Consumer spending growth is steady, but not spectacular,” said HSBC Securities economist Ryan Wang. When combined with manufacturing weakness and slower labor-market improvement, overall economic growth in 2016 “will come in a little lower than the average over the past five years.”

HSBC forecasts the economy to grow at a 2.5% rate in the second half of the year, and 1.8% for the full year. Barclays economists on Thursday lowered their third-quarter forecast for growth by 0.2 percentage point to a 2.6% pace. Macroeconomic Advisers reduced its third-quarter projection to a 3.2% gain from 3.4%.

With few signs of stronger momentum for consumer spending, manufacturing output or hiring emerging in recent data, and still-soft inflation, Mr. Wang and many other economists expect the Fed to hold rates steady at next week’s policy meeting.

It is a familiar story for the U.S. economy since the recession ended in mid-2009. Signs of gathering strength often have failed to yield a sustained acceleration in the expansion. Some firms now see consumers growing more cautious ahead of November’s election.

“We were growing like crazy,” said Jason Hornung, who operates Hornung’s Ace Hardware in Linglestown, Pa. “This year, not so much. It’s been stagnant. That seems to happen around an election year.”

Customers have pared spending on bigger-ticket items such as riding lawn mowers and high-end chain saws, he said. Those purchases can typically be postponed if consumers are uncertain about the future.

Nationally, retail sales declined a seasonally adjusted 0.3% in August from July, the Commerce Department said. Spending at auto dealerships and department stores fell last month. So did sales in the category that includes online purchases with Amazon.com Inc. and its competitors, a bright spot for spending this year.

Consumer spending had helped offset weak manufacturing output early in 2016. A stronger dollar slowed exports and a retrenching energy industry hurt business investment. With energy prices and the dollar mostly stabilizing of late, the drag was expected to ease. But in August, manufacturing output fell 0.4%, and is down by the same amount from a year earlier, according to Fed data released Thursday. The latest drop was led by lower output of consumer goods.

“We have not seen much change in the general economy in North America,” Dave Farr, chief executive of Emerson Electric Co., told investors Wednesday. “On the consumer side of our businesses we’ve seen growth, but even the consumers are being cautious…On the industrial side, companies continue to cut.”

The producer-price index for final demand, measuring changes in the prices that U.S. companies receive for their goods and services, was unchanged in August, both from July and a year earlier, the Labor Department said Thursday.

And a separate Commerce Department report showed inventories at U.S. businesses were unchanged in July, an indication firms don’t expect more robust demand in the near future. The paring back of private inventories has been a major drag on overall GDP growth for the past five quarters.

—Jeffrey Sparshott contributed to this article.