The Wall Street Journal is Rupert Murdoch’s PR organ for his Move Inc. subsidiary, which provides marketing services Realtors. The Journal put out a PR release yesterday that,” U.S. New-Home Sales Rise to 7-Year High.” While technically correct, it is nevertheless misleading, tainted by the paper’s tilt toward bullish pronouncements on housing, thanks to Move Inc.’s main client being the mammoth NAR housing cartel.

It is misleading because 2008 was near the bottom of the housing crash. Nowhere in the piece did the flak who wrote it mention that fact. The PR staff did post a chart though. It was buried near the bottom of the post and they mashed the scale down to about a half inch high. I guess that’s what you call fair and balanced reporting.

In the interest of showing the facts, I constructed a chart showing new home sales back to 2005, along with prices, to give you a clear picture of what’s really going on here. Just in case the graphs don’t speak for themselves, I included my impressions of what they show. I also increased the height of the chart just a little to give you better perspective. 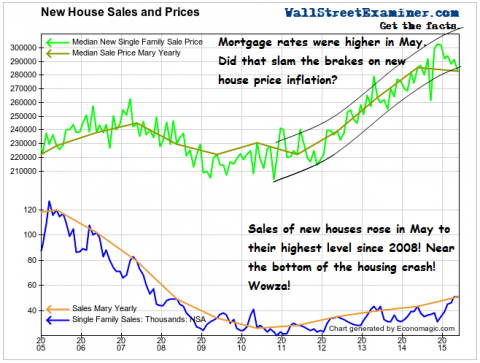 At the end of the WSJ piece, the writer talked about regional differences. He must be a wild and crazy guy, because there was no basis in fact for his observations.

Sales varied by region. New-home purchases surged in the Northeast and climbed in the West, but fell in the Midwest and South.

I guess he was looking at the funked up seasonally adjusted fictional numbers, where the Census Bureau takes the sampling error, which they admit is huge, and the seasonal adjustment error, and multiply them times 12 to annualize and increase the size of the errors. Because nowhere in the actual, not seasonally adjusted data is there a shred of evidence that sales rose in the Northeast and fell in the South.

In fact, sales were dead flat in the Northeast, at the same depression level where they have remained for 7 years. May sales in the Northeast totaled 3,000 units (rounded), exactly the same as in May last year. They’ve either been 2,000 or 3,000 units in every May since 2008. In my book, that’s both flat, and dead.

Sales did fall year to year in the Midwest and they did rise in the West. They got those right. But sales soared in the South. This is an artifact of US migratory patterns, not systemic, nationwide growth. Whoever said, “The South shall rise again,” must have been talking about, real estate.

Here again is a chart that will allow you to see for yourself, starting in 2002 for historical perspective. 2002 was the bottom of a recession. In not one region have sales recovered to the levels recorded in 2002. The best region is the South, which is down 25% from the May 2002 level. The West is down roughly 35%. The Midwest is down nearly 2/3, and the Northeast is still at only roughly half of the 2002 level. So what we are talking about here ladies and gentlemen is a “recovery” all the way back to half or 3/4 of the level of the BOTTOM of the previous recession.

They can call it “rebound,” or “recovery,” or “momentum,” or whatever they want. It still looks like a depression to me.