SF Housing In One Picture: Holy Cow! This Makes 6 Years Of Non-Recovery

The talking heads are gushing about December new home sales, but…….. 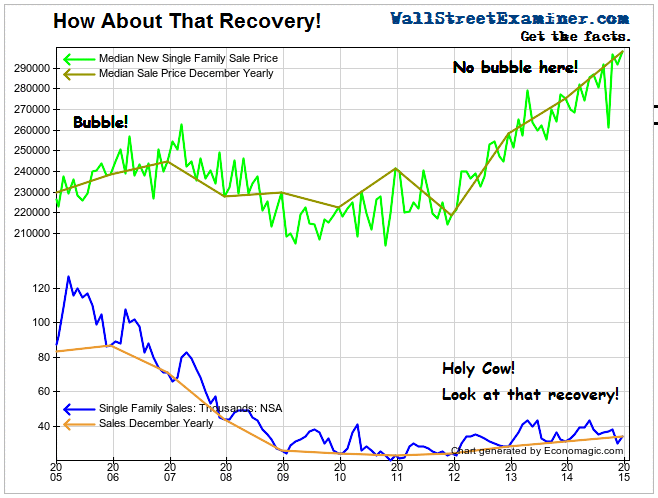 In case you’re wondering, the seasonally adjusted (SA) headline, larger than expected gain, was due to calendar factors and the bogus drill of annualizing monthly SA data, which merely magnifies the monthly error times 12. But hey, who thinks about that! Certainly not mainstream financial news repeaters.

Builders typically don’t book sales on weekends, even though contracts are often signed on weekends. The worker bees who review the contracts and enter the data, work regular business hours Monday to Friday. Sales from November 29 and 30 were booked on December 1. That’s why the headline number “beat” Wall Street conomist consensus expectations. Likewise, the November number “missed” by a significant margin because those end of month sales in November weren’t booked in November, but in December.

When you take the time to look at the actual unadjusted data, you see these things. If you’re the mainstream media, you just ignore the facts and parrot everybody else–crowd behavior at its worst. So if you feel compelled to read and believe the headlines, you’ll be misled time and again. At least look at a chart of the actual data over time, see the trend for yourself, and ask yourself the question, “Has anything changed here.” Amidst all the media histrionics, either jumping up and down and cheering, or hand wringing and gnashing of teeth, most of the time the answer will be, “No, nothing has changed.” And that’s the answer here.