Shale Shock: Another Leg Lower In Oil Coming After Many Producers Found To Have Mar Lower Breakevens

One of the great unknowns facing the US shale industry, and threatening the recurring rumors of its imminent demise, is how it is possible that despite the collapsing number of oil wells, and despite the plunge in crude prices which supposedly are well below all-in shale production costs, does production not only refuse to decline, but in fact has been largely increasing in the past 6 months, with just a modest decline in recent weeks. 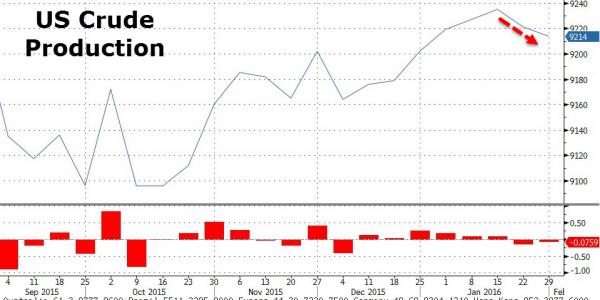 The answer may come as a surprise not only to industry pundits, but certainly to Saudi Arabia, whose entire strategy has been to keep pressuring the price of oil low enough for long enough to put as many “marginal producers” in the US shale space out of business as possible.

According to a report by the Bloomberg Intelligence analysts William Foiles and Andrew Cosgrove, Saudi Arabia may have its work cut out for it as it will be far harder to kill many U.S. E&Ps than analysts originally thought.

The reason: a break-even model for the Permian Basin and Eagle Ford shows that oil production across five plays in Texas and New Mexico may remain profitable even when WTI prices fall below $30 a barrel, according to a 55-variable Bloomberg Intelligence model for horizontal oil wells.

The Eagle Ford’s DeWitt County has the lowest break-even, at $22.52, followed by Reeves County wells targeting the Wolfcamp Formation, at $23.40. The diversity of breakevens highlights the hazard posed by looking for a single number, even within a play.

These counties together produced about 551,000 barrels of liquids a day in October. Taking into account drilled but uncompleted wells boosts the number of potential survivors to 19. The wide range of break-evens undermines efforts to come up  with a single threshold for U.S. shale producers.

The full list of breakevens by county is shown below: 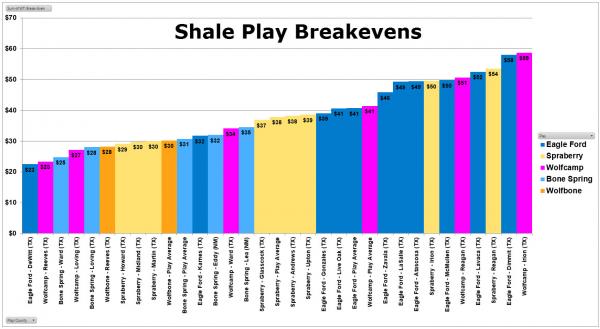 To corroborate its model of break-even levels for oil producers in the Permian and Eagle Ford, Bloomberg used a Baker Hughes’ horizontal rig counts in the Spraberry play Permian and Eagle Ford. Howard County, Texas, has the lowest average break-even, at a WTI price of $29.19 a barrel. Its rig counts have doubled since oil prices began collapsing in mid-2014. In Midland County, at $30, rig counts are up 56%. Counts in Irion and Reagan counties, with two of the highest break-evens targeting the play, have fallen more than 70%.

None of this would be feasible if average breakeven prices were anywhere close to the $50-60 assumed by the consensus.

But where Bloomberg’s analysis gets outright disturbing, if only for Riyadh, is that once wells are completed, breakeven costs tumble to Saudi-like sub-$20 prices in some countries.

Tapping drilled but uncompleted (DUC) horizontal oil wells drops break-even WTI oil prices to less than $20 a barrel in eight county-play combinations in the Permian and Eagle Ford. The analysis assumes that drilled wells are sunk costs and that drilling constitutes 30% of a well’s total cost. The 55-variable model shows that the impact of removing drilling expenses varies significantly by county and play, with break-even reductions ranging from $7.24 to $21.51, or 28% to 42%.

Bloomberg proceeds to crown DeWitt County, Texas, as the King of Shale due to its lowest breakevens across the land:

DeWitt County, Texas, has on average the lowest break-even WTI price for its oil production among 29 county-play combinations in Texas and New Mexico, at $22.73 a barrel, according to a Bloomberg Intelligence model. Shifts in drilling in the Eagle Ford may reflect differing  cost levels. Dimmit County, with a break-even of $58.21, led the Eagle Ford in 1Q15 with 226 new horizontal oil wells, four times as many as DeWitt’s 56. Two quarters later, Dimmit’s new wells fell 71% to 65, while DeWitt’s surged 77%. 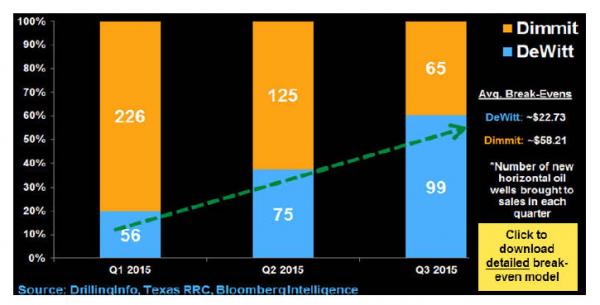 There is far more in the comprehensive analysis, but the punchline is simple: what many thought would be the “breaking” price point for virtually every shale play has just been lowered, and quite dramatically at that. It also means that algos and traders who had reflexively bought any dip below $30 on expectations this is close to the “sweet spot” and where the Saudis would relent, will have to drop their support levels by as much as a third!

Finally, it means that if Saudi Arabia truly means to put the marginal non-OPEC producers (read efficient U.S. shale) out of business, it will have to pump far more not less as many speculate, and worse, it will have to ramp up production very fast because as is well known by now, the Saudi Kingdom is itself hurting profusely as a result of low oil prices which are leading to budget crunches and domestic austerity such as soaring prices of gas and water.

Finally, since Saudi Arabia had expected that its FX reserve outflow would last only temporarily using $40-50 breakevens, it will have to sell many more US reserves (either TSYs or stocks) to fund the cash shortfall which will persist for far longer until oil catches down to the lowest cost US producers, which as of today’s close are at least $10/barrel lower.

In short: the oil price war is about to enter its far more vicious, and far more lethal phase, and while it is unclear who ultimately wins, whether it is Shale or the Saudis, the loser is clear: anyone who bought into bets of an imminent oil bounce.

Source: Shale Shock: Another Leg Lower In Oil Coming After Many Producers Found To Have Far Lower Breakevens – ZeroHedge