The June 3rd issue of SentimenTrader contains an interesting writeup on risk taking. 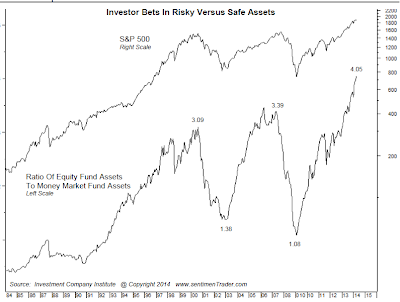 Excerpt (below) and chart (above) by permission…

Periodically, we check in on a ratio that first started to become concerning last year.
At the time, the ratio of assets invested in equity mutual funds and ETFs had eclipsed the assets stashed in safe money market funds by a factor of 3. That was on a par with the levels only seen in 2000 and 2006/2007.

At the time, and subsequent to that, we’ve discussed the fact that the ratio is not necessarily bounded by any limits, and it could “grow to the sky”. The reason it was notable is because it had been bounded during the past 15 years, as stocks traded within a broad range.

Now that it was broken out above its previous peaks, there is no telling how stretched the ratio can go.

That’s not too far above and beyond what the S&P 500 has done, so like the growth in margin debt, it seems reasonable given how well stocks have done.

That the ratio is so far above the 2000 and 2007 peaks seems like it should be market-negative, but we haven’t considered it to be for quite a while, due to its in-line rise with stock prices, and the fact that the ratio has broken out above its previous peaks and we don’t know where the next logical place would be to consider it extreme.