For the longest time it was Wall Street’s best kept secret: keep Unicorns – companies with valuations over $1 billion – hidden in their gilded stables (aka private) for as long as possible, and allow Silicon Valley billionaires and venture capitalists to overbid each other by investing modest amounts at ever more ridiculous valuations, permitting book-marking based on a handful private investment rounds to hit stratospheric levels and allowing the investors to take out loans backed by sky-high valuations as collateral.

But eventually the moment to cash out would arrive, and when one after another unicorn went public, the market finally got a detailed look at the financials and true price discovery was finally allowed to begin.

What happened next is summarized by JPM’s Michael Cembalest:

Unicorns refer to private companies with valuations in excess of $1 billion. There are around 150 of them (up from 80 in 2014) with an aggregate valuation of over $500 billion, at least based on their last round of valuations as reported by research firm CB Insights. What about the unicorns that have already been released in the wild? The chart below looks at 17 unicorns that have gone public on US exchanges so far, showing stock price performance relative to the closing price on the day of the IPO. 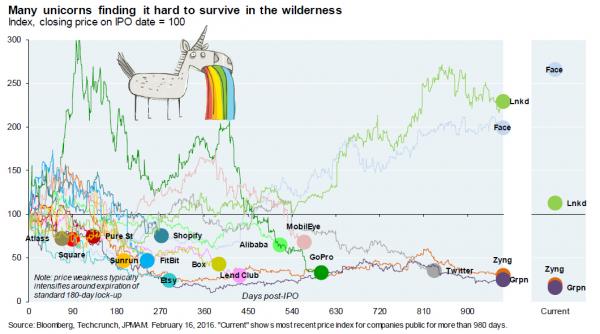 As the WSJ observes, of the 48 venture-funded U.S. tech companies that went public since 2014, 35 now trade below their initial public offering prices.

Some more of Cembalest’s observations:

The table below contains select terms on unicorn investments. There is essentially a trade-off at work: in exchange for investing at a substantial premium to prior rounds, later-stage unicorn investors can receive liquidation preferences of different kinds when an IPO does not take place, and either blocking rights or ratchets (automatic gross-up of shares held) if the IPO price does not hit a predetermined target. 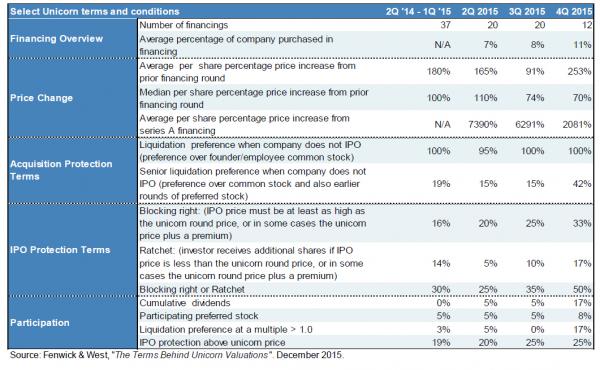 All of the above means that when it comes to cashing out of massively overvalued private “unicorns”, the exit door has almost slammed shut for all but the best names, but the party is certainly over especially when observing several sharp downward revaluation rounds for companies that are IPOing relative to their final private round.

However it gets worse, because suddenly the entire Venture Capital euphoric trend of the past five years is in jeopardy, and not only becausecarriers may soon limit mobile online ads, the bread and butter of most SV business models, but as spillover from Unicorn public rounds impairs the private capital-raising process in general.

Indeed, as the WSJ writes, as a result of the recent poor market conditions, suddenly early stage companies are finding it much more difficult to not only raise capital but to do so at premium valuations: “a year ago, startups with nascent business models were scoring billion-dollar valuations as investors raced each other to write checks. Today, venture capital is drying up for less successful startups. Investors, eyeing collapsing tech stocks and economic sloth, are culling their portfolios and forcing cash-starved companies to retrench or shut down.”

One of the most prominent examples showcasing the bursting of the second tech bubble, are substantial valuation “down rounds”:

Some companies are raising funding by selling shares at lower prices than they had in earlier rounds. Such “down rounds” can hurt a startup’s chances at recruiting and discourage employees who are often paid with stock options.

Janrain Inc., which facilitates website logins for companies, raised $27 million in December at a 50% valuation markdown from its January 2013 fundraising, said a person familiar with the matter. Martin Day, Janrain’s financial chief, said he is pleased the company is on the “backside of that funding.”

Said otherwise, the hanogver has begun:

These changes are eroding the idea that drives Silicon Valley’s economy: Work hard, secure venture capital and get rich. With valuations falling, the other side of the equation is reappearing: Failure is often just around the corner.

For the best soundbite of Silicon Valley’s suddenly prevalent “doom and gloom” sentiment we go to Rory O’Driscoll, a partner with venture firm Scale Venture Partners, who likens the mood today to the moment after the Titanic hit an iceberg. “No one wanted to jump into the lifeboats right away,” he said. Some hesitated. The smart companies are cutting expenses and raising capital if they can. “You’ve got to make a quick decision now.”

It’s not just talk: “investors funded fewer U.S. startups in the fourth quarter than any period in more than four years. Since November, at least a dozen tech companies, which combined raised well over $2 billion in venture funding, have announced layoffs, letting go hundreds of people that in most cases represented at least 15% of their staffs. Other companies are closing money-losing projects and raising debt to tide them over.”

Even with the “Titanic sinking”, money is still scrambling to be allocated in hope of a late-inning homerun return: in the fourth quarter, financing for U.S. startups fell 6.6% to $17.13 billion, the lowest in five quarters but still approaching dotcom-boom levels. In other words, while certainly subdued, the euphoria still there:

This month, Magic Leap Inc., which has yet to release its “mixed reality” glasses—which overlay virtual images on the real world—raised $794 million in funding at a valuation of $4.5 billion. Car-hailing service Uber Technologies Inc. continues to reach new heights, raising funding in December that valued it at over $60 billion, a record for a private venture-backed company. 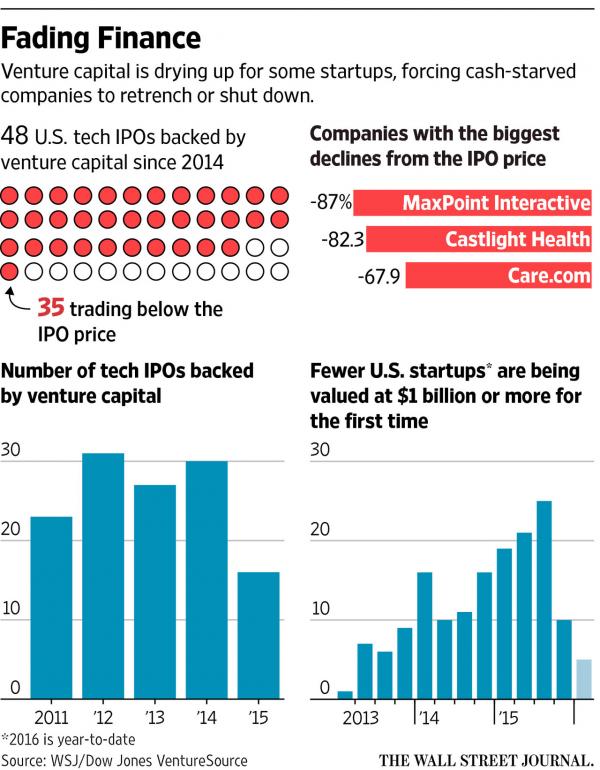 But the worst indicator that the equity bubble has burst is that some startups are turning to debt, which lets them raise money without setting a lower price for their equity—ducking for the moment a potential reckoning with investors.

The big problem with debt, however, is interest, which means that “pie in the sky” growth stories which defer cash flow generation many years into the future, are no longer an option.Which may actually be good news as it forces startups into some profitable discipline from the very beginning.

One company to choose debt instead of equity is Daily fantasy-sports operator DraftKings Inc. which raised nearly $100 million in December by selling notes to existing investors that could convert to discounted shares, according to a person familiar with the matter. The notes pay a 5% interest rate, according to filings by mutual funds that hold the DraftKings notes.

The notes helped avoid a big drop in the $2.1 billion valuation the firm received last July. Funds advised by Wellington Management marked down their DraftKings shares by more than 70% in the fourth quarter.

For most startups the shift to a world in which they have to actually pinch pennies will not be pleasant as the following anecdotes from the WSJ illustrate:

Online dating startup Zoosk Inc., which withdrew its IPO filing last May, made a second round of cuts in January, this time 40 people. Its Chief Executive, Kelly Steckelberg, also said the company needs to build a “sustainable” business.

At some point, tech companies may pull back on the employee perks—the free food, stylish workplaces and on-site gyms. Most companies view these perks as vital to retain morale and recruit the brightest in a competitive industry.

Instead, some are nipping around the edges, like job-recruiting site Glassdoor Inc., which took away a dessert table. On a recent afternoon, workers mobbed the cookie-filled table when the company announced its demise.

A Glassdoor spokeswoman said in an email that the move to end dessert was “about overall efficiency and simplifying the offerings to feed more than 500 people…The added benefit was lowering costs.”

However, few warnings stories about the Silicon Valley euphoria turning to an all our rout are as illuminating as that of Practice Fusion, which banking on the growth of doctors using electronic health records, looked poised for its own IPO when it raised $85 million in a 2013 funding round led by Kleiner Perkins Caufield & Byers at a $635 million valuation.

Practice Fusion offered free food with no starches like pasta, unless it was “cheat day” when they might get white rice. Photos posted under its Instagram account showed employees filling the CEO’s office with balloons to celebrate his birthday last May, engineers dressing up in animal onesies, and races around the office on hot pink tricycles for the company’s annual olympics.

By summer 2015, Practice Fusion was burning through $4 million of cash a month as it chased money-losing initiatives such as telemedicine, which intended to connect patients with doctors for appointments by phone, people familiar with the matter said. At the same time, revenue was about 10% short of targets.

With cash running out, Kleiner Perkins partner Beth Seidenberg and other board members decided to remove Mr. Howard as CEO and replace him with an executive who would curb costs. Kleiner said the company needed a “more commercially oriented leader for its next phase.”  On Aug. 14, the company announced Mr. Howard had stepped down. It was a Friday.Employees gathered for a somber all-hands meeting, instead of the Phenomenal Friday gathering that had been scheduled.

The situation was dire when Tom Langan, the chief commercial officer, took over as CEO. By October, the company was nearly out of cash, and the volatile market had scared many venture-capital investors away from high-price deals. To keep the business afloat, investors that month gave Practice Fusion a $20 million bridge loan. Since then Mr. Langan has laid off a quarter of the workforce. The firm cut free meals to three times a week. No photos have been posted to the Instagram account since August, when Mr. Howard was replaced and became chairman.

Practice Fusion tried to raise new cash, but those efforts have fallen short. Mr. Howard, meanwhile, has sought buyers for his shares, according to people familiar with the matter.

Rebecca Lynn, who led an early investment in Practice Fusion for Morgenthaler Ventures, says making cuts is hard but necessary, given the rough funding landscape. Said Ms. Lynn: “The companies that make these moves now are the ones that are going to make it out to the other side.”

Or, if the Titanic analogy holds, they may all simply sink as the global liquidity glut suddenly dries up and takes with it the biggest tech bubble since the dot com era.

Source: The Mood in Silicon Valley is Like the “Moment After the Titanic Hit an Iceberg” – ZeroHedge