ECB data on bank deposits for the Eurozone shows total bank deposits down sharply in July, breaking the uptrend in force since the low in 2014. That’s shocking considering that the ECB just boosted its money printing QE programs. Deposits should be rising steadily in concert with the amount of QE, not falling. But cash extinguishment and capital flight are increasing faster than the ECB can print.

We continue to see evidence that funds are fleeing the European banks for the relative “safety” of the US. My long running thesis that the US is and will be The Last Ponzi Game Standing is still well supported by the data. The looming problem is that all Ponzi schemes eventually collapse. The only question is the timing, which we deal with in other reports.

The charts below show that the European banking system is in a slow moving disaster. Only smoke, mirrors, and the unwarranted confidence of most Europeans in their banks and the ECB are keeping the system afloat.

The source of all European bank data in the charts that follow is the ECB Statistical Warehouse.

7/1/16 Money printing in the form of the ECB’s asset purchases should cause a euro for euro increase in deposits, but that has not occurred. Sorry to be repeating this, but it’s because a substantial portion of the ECB’s newly printed money flees the Eurozone to avoid the NIRP tax. 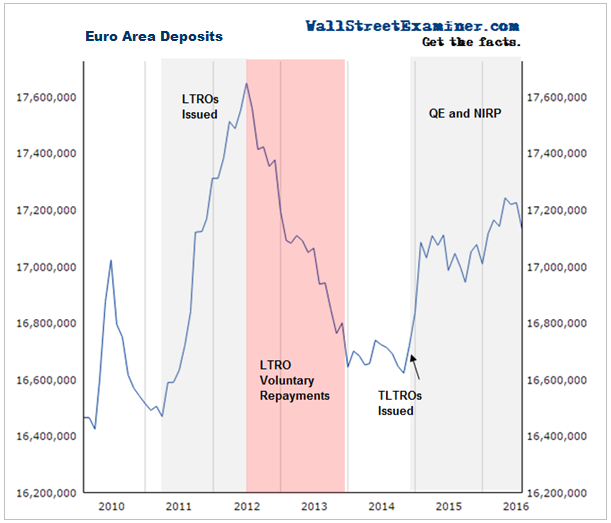 The problem grew worse in July when bank deposits in Europe actually contracted in spite of €70 billion per month in QE.  Deposits contracted by €95 billion in July and are down by €112 billion since April. Over that span the ECB printed €284 billion. The net effect was that all of that, plus another €95 billion was either extinguished or fled the European banking system. Imagine that!  €379 billion gone! Poof! You have to hand it to Super Mario. That is some disappearing act.

Bank deposits should increase euro for euro with the amount of ECB purchases.  When the ECB buys securities, it debits the dealer’s account at the ECB. That cash then flows into the banks as the dealers trade with other parties. Another means of transmission is when governments spend funds they raised in debt sales funded by the ECB indirect purchases via dealers.

Since the inception of NIRP in September 2014 the ECB balance sheet has grown by €966 billion. But bank deposits have only grown by €409 billion.  €556 billion of the €966 billion that the ECB has printed and pumped into the banking system has disappeared from the face of the European continent.  That, ladies and gentlemen is the magical effect of NIRP.

To illustrate the point, let’s compare what has happened in Europe to what happened in the US under QE and ZIRP from March 2009 to the end of 2014 when QE ended.

The ECB reports total combined deposits of all types as a line item. The Fed reports various types of deposits separately and then in various groupings, none of which are an exact match to the ECB’s total deposits figure. I keep a total US deposits figure combining all checkable deposits and savings deposits. It grew by $4.30 trillion from March 2009 until the end of 2014. During that period, the Fed added $3.66 trillion to its balance sheet (printed).

In other words, US checking and savings deposits grew by 117% of the amount which the Fed injected into the system. Contrast that to Europe where bank deposits have grown by only 42% of the amount of ECB injections in the latest round of QE. Europe’s experience demonstrates the massive drag effect of NIRP.  While not passed through to most bank depositors yet, sovereign yields have dropped below zero, encouraging holders to sell and take a windfall profit, then move the money to the US. It also encourages potential buyers to send their cash to the US rather than accept a penalty for holding the paper. 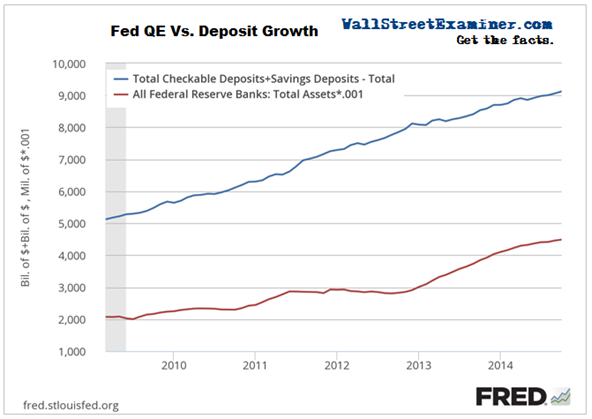 We also see that US deposits grew at a steady pace throughout QE. Fed policy may have been insane, but at least its effect was stable and predictable (massive asset inflation).  Conversely, in Europe bank deposit growth has been whipped around by whatever crazy idea that Mario Draghi might come up with at any moment, including the idea that taxing deposits and thereby driving money out of Europe would stimulate the European economy.

As crazy as Fed policy has been, the Fed hasn’t gone there and probably won’t.  That may just be a lucky accident, but so far the Fed hasn’t descended to the depths of depraved policy which the ECB and BoJ have.

Note: Indented, minified sections below are from earlier reports.

3/2/16 Where’s it going? I have constructed the chart below to illustrate what is happening. That chart shows the correlation between the ECB’s asset growth, and the size of its various deposit facilities–what economists call reserves–along with the correlation to total European bank deposits and the direction of US Treasury bond prices. 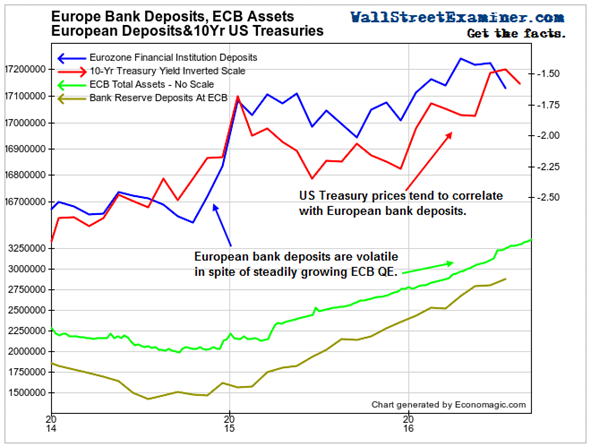 Note the correlation between European bank deposits and the direction of US Treasury note prices (yield inverse) at the top of the chart. We obviously know that some European deposit holders have been buying Treasuries. I have shown charts similar to this in the past which depict this correlation over the long term. This chart shows what has happened since the ECB started NIRP in June 2014.

The lower half of the chart shows that as the ECB purchases assets (green line) there is a like increase in bank reserve deposits at the ECB. This is basic Accounting 101. The ECB buys the bonds from the banks by crediting their deposit accounts at the ECB with money it materializes by waving its magic money wand through the electronic ether.

Those reserve deposits which didn’t exist prior to that moment instantly become very real, and absolutely immutable. They can move around on the liability side of the ECB’s balance sheet, but they can’t leave it. Banks can get rid of their reserve deposits by buying assets from other banks, dealers, investors, businesses, or governments, but that only leaves another bank with the reserve deposit. Somebody will always be stuck paying the interest on the deposit.  That makes those reserve deposits a hot potato that nobody wants, but nobody can escape as cash circulates through the banking system. Gone today, here tomorrow, oops.

The problem for the bagholding banks is that when they try to pass on the negative interest rates to customers, those customers with international connections do the rational thing, because, unlike central bankers, they are not insane. Deposit holders find the best option for their cash outside the European banking system, and the deposit leaves that system for greener pastures, most often in the US. Those deposits move frequently via the purchase of US Treasury securities or even US stocks. When the depositor buys Treasuries or US stocks, his bank exchanges his Euro deposit for US dollars and transfers the US dollars into the US account of the seller of the Treasuries. That could be a dealer, another investor, or the US government itself. The Euro deposits are thus converted to dollars and become US bank deposits.

This is basic interest rate arbitrage, and NIRP exacerbates that to the nth degree. That’s how the ECB can pump 650 billion euros into the European banking system, and deposits in that system manage not to grow at all. Depositors aren’t stupid. They’re getting the hell out of Dodge.  The only stupid ones are Mario Draghi and his fellow central banksters at the ECB and more recently the BoJ. This raving lunatic is singlehandedly keeping the US Ponzi Game markets rolling while doing absolutely nothing for Europe.

As insane US central bankers may be, I suspect that they are just lucid enough to understand the benefits of NIRPitrage to the US Ponzi. That’s why I doubt that we will ever see NIRP in the US, and why the Fed may just follow through on its threat to gradually raise the sham Fed Funds rate (n0body really trades Fed Funds).  The bigger the gap between positive rates in the US and negative rates in Europe becomes, the more capital will be encouraged to flee Europe and float US bond prices higher.

As we’ve seen recently, and as I previously forecast, it has also been enough to foment intermittent rallies in US stocks. This ridiculous pattern can go on for a long, long time.  While buy and hold is dead, these policies result in trading opportunities on both long and short sides of the market for those who are paying attention.

10/27/15 Negative deposit rates cause falling deposits and banking system contraction, the opposite effects of what the policymakers expect. This is exactly what common sense told us would happen when the negative rates were announced in 2014. Yet in spite of a year of proof, central bankers seem incapable of making the connection.  The shrinkage of deposits is a sign that the funds are either flowing out of Europe or are being used to extinguish debt. In either case it would be a bad sign for the European economy and if it’s the latter it would be bad news for world markets.

2/25/15 The weakening trend of 2013 was apparently largely due to the paydown of ECB emergency loans. That simultaneously extinguished deposits. Since the ECB instituted an interest charge on deposits held at the central bank, banks had been liquidating outstanding loans again in order to extinguish deposits.

The decline in deposits since the institution of the negative central bank deposit rate was entirely predictable, but the ECB pundit community was foaming at the mouth in panic, determined to see the ECB institute outright government bond purchases. That finally happened.

German (and some other European) households, however, continue pouring money into German banks. While financial corporations and institutions flee the system, the public has been successfully hoodwinked, or it has no other options. 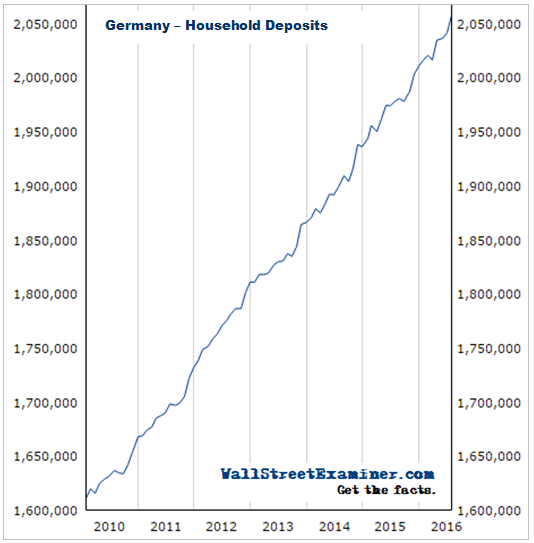 There are similar trends in both France and, amazingly, Italy The question is whether, if and when the crunch can no longer be papered over, households will be bailed out or will be the bagholders.

Meanwhile, financial institutions continued to flee German banks in July. The downtrend in that series has been unrelenting. Conversely, France had been stable, but then it broke down in July. 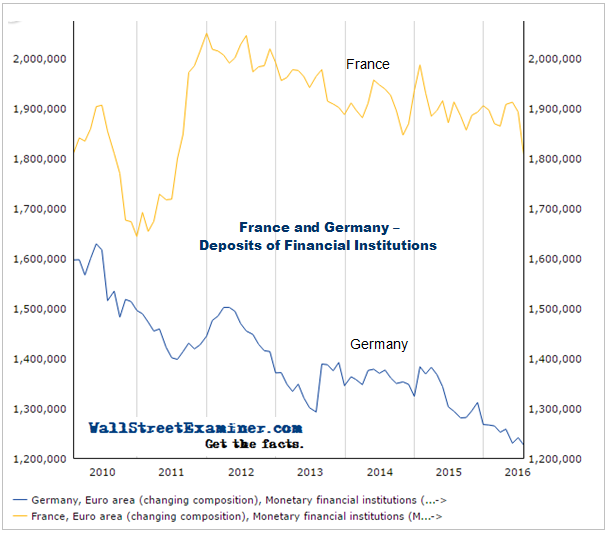 6/10/16 If any picture illustrates the problem in Europe, it’s that flight of bank cash from Europe’s largest banking system. Confidence in the system is falling apart. It’s probably the real reason that the ECB keeps boosting QE, buying more and more assets from the banks.  The resulting deposits are at the ECB, not Deutsche Bank.

I talked about the issue in a bit more detail here. 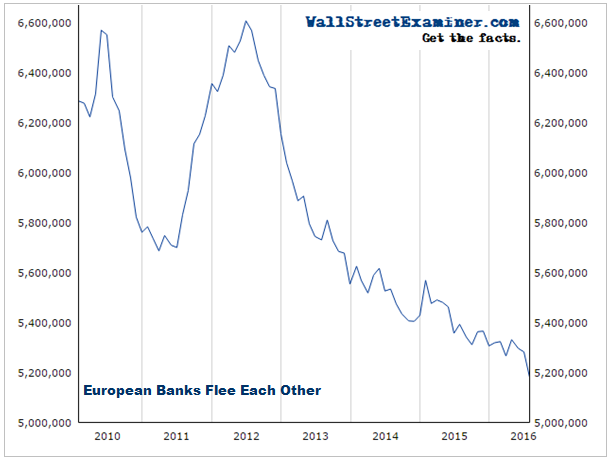 Meanwhile, are QE and NIRP working to stimulate credit expansion in the economy? The answer is no. Loans to households have grown at an annual rate of around 2% since October 2015. Accrued credit card interest alone could account for most of that increase. There’s no evidence of real growth in consumer lending. Loans to nonfinancial businesses fell to a new low in December 2015 and have barely budged off that low since then. This is hardly growth. It is below the peak of the 2015 dead cat bounce. 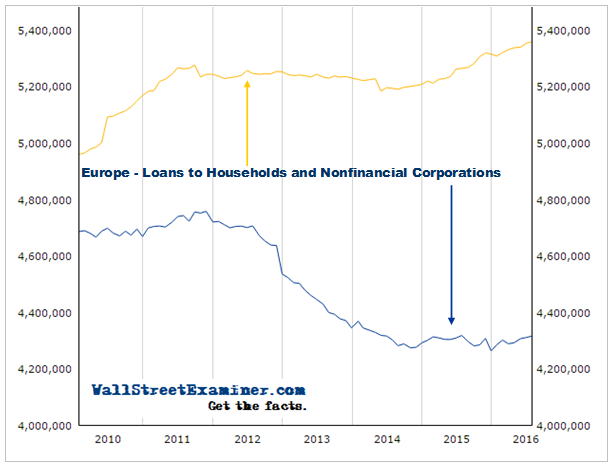 It’s also notable that the TLTRO, which is the ECB’s targeted loan program that was supposed to stimulate commercial lending, began in September of 2014.  It has had no impact. This is just another example of central bankers acting out their delusions regardless of the feedback that reality provides. Meanwhile, Super Mario’s bag of tricks has run out of magic.

These reports are published around the the turn of the month. Click here for the most recent monthly updates.

Subscribe to these reports and read them for 3 months risk free, with a full money back guarantee..