Greg Ip knows just enough economic conventional wisdom to be a masterful and well respected word soup chef. Today he took on an explanation of why Argentina could “create” inflation via money printing, and the Fed, ECB, and BoJ couldn’t.

He said that it was because Argentina’s central bank bought government debt directly, and the major central banks didn’t. Apparently buying government debt indirectly via third parties somehow insulates economies from having inflation. He explained it, and his bobblehead Wall Street Journal readers and fellow media word soup practitioners all shook their heads in agreement, even though they didn’t understand a word of it. But it sure sounded plausible for those who ignore the basic accounting of how money goes from a government debt auction into the economy and banking system.

With inflation in the U.S., Japan and the eurozone stuck below their 2% targets, central banks are asked regularly if they have the tools to prod it higher. A better question would be: Do they have the will?

There is a tool virtually guaranteed to create inflation. It’s called helicopter money—named for the image of dropping cash from helicopters—and consists of a central bank explicitly printing money to finance increased government deficits.

Embracing helicopter money would erase the boundary between highly politicized fiscal policy and scrupulously independent monetary policy. That boundary is sacred not just to central bankers, but also to governments that correctly view it as a bulwark against economic adventurism. That’s why the world economy will have to look a lot worse before central banks and governments go down that road.

To understand the taboo, examine a country—Argentina—only now extricating itself from years of de facto helicopter money, which is also called monetary finance.

After Argentina defaulted in 2001, some bondholders refused to accept the government’s settlement and, through the U.S. courts, locked Argentina out of global capital markets. Unable to borrow from underdeveloped domestic markets and unwilling to cut its deficit through lower spending or higher taxes, the government turned to the central bank. Central bank temporary advances and transfers of profits to the treasury, both forms of money printing, shot from 4 billion pesos in 2007 to 159 billion pesos last year, equal to 3% of gross domestic product.

“The central bank was lender of first resort to the treasury,” Alfonso Prat-Gay, who ran the central bank from 2002 to 2004 and is now the country’s finance minister, said in a recent interview. 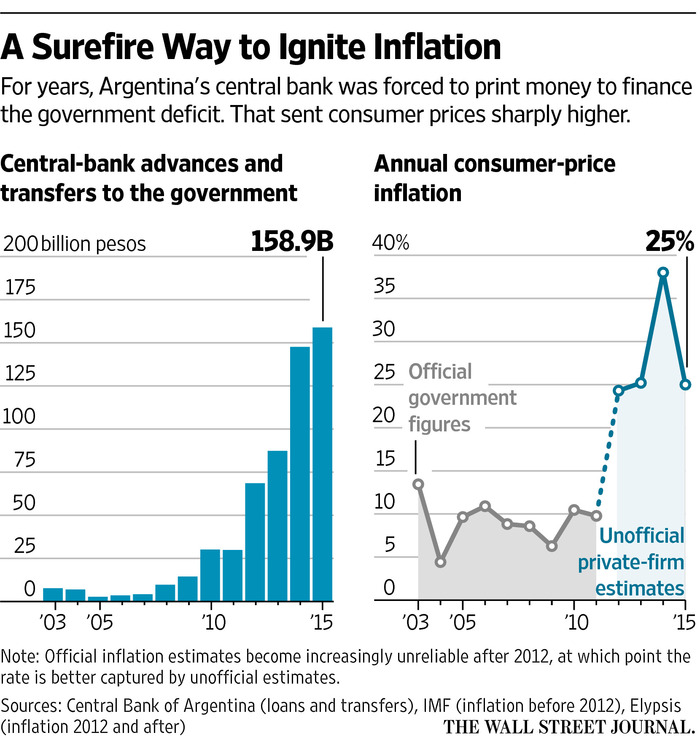 Supposedly, by Ip’s reckoning, the Argentinian buying stimulated inflation because it was purchased directly from the government. Supposedly, because the Fed, (and the ECB and BoJ) use middle men when they purchase government debt, that doesn’t stimulate inflation.

If the Fed could create inflation then and Argentina’s central bank can now, why has it proven so difficult for the Fed, the European Central Bank and the Bank of Japan? It’s not enough to print money; the money has to be spent. Whereas Argentina printed money because the government needed it to finance spending, the Fed, ECB and Bank of Japan acted independently, at a time when their governments have been trying to rein in their borrowing.

This is not only utter nonsense, it is illogical on its face. Because Ip is so well liked by his peers in the propaganda ministries, no one ever bothers to question his tortured logic. This problem is endemic in the financial media.

The statement presumes that the money the Fed printed to buy US government debt was not spent! That supposition is either disingenuous or blindly ignorant. Where does Ip think the money went? While the US may have been reducing its annual deficit, deficit spending remained massive. The government continued to spend more than it took in from taxes and continues to do so today.

During the period of QE from 2008 to 2014, in one week the Fed purchased government bonds from the Primary Dealers. The next week the dealers use that cash to purchase government debt at the Treasury auctions. The next week, the Treasury spent the money it got from selling the debt to the Primary Dealers, which they got from the Fed the week before. And the Fed again bought the government debt the dealers had purchased just the week before. The only difference between the Fed’s buying and the Argentinian central bank buying is that the Fed’s buying went through a pipeline that included the Primary Dealers whereas Argentina’s did not. But the cash all ended in the same place.

When the Treasury spent the cash that the Fed had printed and deposited to dealer accounts 2 weeks prior, that cash then entered the banking system, where it resides to this day, and will continue to reside indefinitely. It is on the books of the banks as cash assets.

US commercial bank deposits skyrocketed dollar for dollar with the Fed cash injections during the period the Fed was printing money to purchase government debt. It got there because the government used the proceeds of the debt sales to pay its bills. Banking system deposits grew accordingly, because they came from the money the Fed had printed 2 weeks before. Deposits grew even during the recession when bank lending was contracting, because the Fed was printing it and injecting it into the banking system and economic stream via the Primary Dealer/Government spending conduit.

True helicopter money means the government announces a big spending boost or tax cut and the central bank promises to print money to finance it, and to never withdraw that money from circulation. This persuades households that taxes won’t go up but prices will. That amplifies the impact on both spending and, by altering inflation expectations, actual inflation. This is not a surgical operation; once expectations become unanchored, there’s no guarantee inflation will rise to 2% and stop.

This is mainstream economic conventional wisdom gobbledygook. Who in their right mind, who actually is part of a household, who actually subsists and supports a family on a paycheck week to week actually thinks this way? Do you? Do you know anyone who does?

Mainstream media PR people like Ip read this stuff in a textbook and accept it as gospel, which is what it is. It’s not factual. It has no basis in the real world. It’s religious mysticism, accepted without question or investigation. The media and the economic priesthood exist to spew this pap in an endless circle jerk. The fact that the real world does not work this way is irrelevant.

As Ip tells in his report, no one really knows how much inflation Argentina got, but whatever inflation it got was almost certainly due to the fact that the Argentinian peso collapsed and the prices of imported goods soared commensurately. That was because Argentina wasn’t paying its bills to the rest of the world.

The difference between the inflation experiences of Argentina and the developed nations under the Fed, BoJ, and ECB, had absolutely nothing to do with whether your central bank bought government debt directly from the government or through a Primary Dealer middleman. The money all ends up in the same place. And it had nothing to do with the inflationary behavior of households because households supposedly ponder government policy before deciding to bid up consumer prices.

Ip then goes on to sing the praises of the Fed, BoJ, and ECB for not buying government debt directly, as if this is somehow an effective policy for preventing inflation when the real reasons, which go unexamined, lie elsewhere. His piece, like so much of his work and that of his colleagues in the captured financial media, is word soup, all empty carbs and no meat. It is propaganda, designed to convince the public of the omniscient wisdom of the Fed and its major central bank cohorts.