The US became an unsustainable service sector based economy from the 1970s onward when service sector employment diverged from manufacturing without a corresponding boost in productivity. Even Alan Greenspan has warned that America is “in trouble basically because productivity is dead in the water…” There are numerous reasons for this plunge in worker-productivity, from perverted inventives not to work to unintended consequences of monetary policy enabling zombies, but perhaps the most critical driver is exposed in the following dismal chart…

51% of total time spent on the Internet is on mobile devices – in 2015, first time ever mobile is #1 – to make a total of 5.6 hours per day snapchatting, face-booking, and selfying… 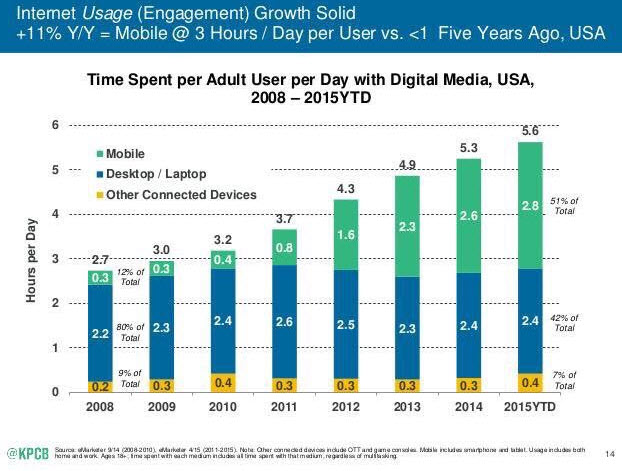 So, while every effort can be made by Ivory Tower academics to solve the problem of American worker productivity, perhaps it can be summed up simply as “Put The Smart-Phone Down!”

As we detailed previously, adjusting for the WWII anomaly (which tells us that GDP is not a good measure of a country’s prosperity) US productivity growth peaked in 1972 – incidentally the year after Nixon took the US off gold. 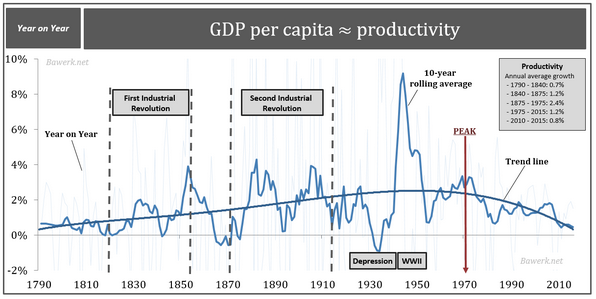 In addition, the last 15 years also saw an outsized contribution to GDP from finance. If we look at the US GDP by contribution from value added by industry we clearly see how finance stands out in what would otherwise have been an impressively diversified economy. 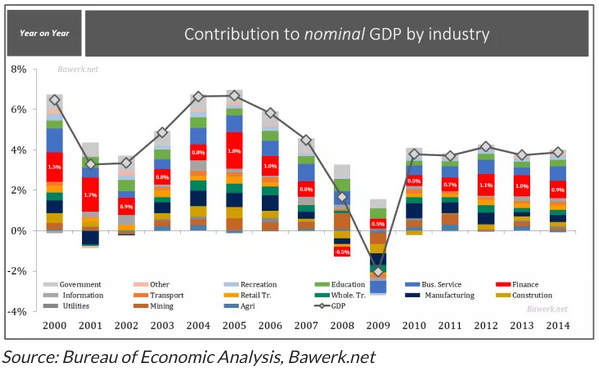 With hindsight we know that finance did more harm than good so we can conservatively deduct finance from the GDP calculations and by doing so we essentially end up with no growth per capita at all over a timespan of more than 15 years! US real GDP per capita less contribution from finance increased by an annual average of 0.3 per cent from 2000 to 2015. From 2008 the annual average has been negative 0.5 per cent!

In other words, we have seen a progressive (pun intended) weakening of the US economy from the 1970s and the reason is simple enough when we know that monetary policy broken down to its most basic is a transaction of nothing (fiat money) for something (real production of goods and services). Modern monetary policy thereby violates the most sacred principle in a market based economy; namely that production creates its own demand. Only through previous production, either your own or borrowed, can one express true purchasing power on the market place.

The central bank does not need to worry about such trivial things. They can manufacture the medium of exchange at zero cost and express purchasing power on the same level as the producer. However, consumption of real goods and services paid for with zero cost money must by definition be pure capital consumption.

Do this on a grand scale, over a long period of time, even a capital rich economy as the US will eventually be depleted. Capital per worker falls relative to competitors abroad, cost goes up and competitiveness falls (think rust-belt). Productive structures cannot be properly funded and the economy must regress to align funding with its level of specialization.

In its final stage, investment give way for speculation, and suddenly finance is the most important industry, pulling the best and brightest away from every corner of the globe, just to find more ingenious ways to maximise capital consumption.

As the slave economy got perverted by incentives not to work, so does the speculative fiat based economy, which consequently create debt serfs on a grand scale.