Despite fearmongering by Greek prime minister and the EU, prime minister Antonis Samaras fell 12 votes short of a needed majority to elect a new Greek President.

As a result, snap elections will be held on January 25.

Stavros Dimas, a former EU commissioner, captured 168 votes in Monday’s decisive third presidential ballot,12 short of the required three-fifths majority after a weekend of frantic backroom politicking failed to round up additional votes from independent lawmakers and small opposition parties.

A sombre-looking Mr Samaras said in a televised statement: “It’s time for voters to do what parliament couldn’t — end uncertainty and restore stability so that we can continue with reforms and make a decisive exit from the bailout.”

“Be optimistic and cheerful, austerity will soon be over,” said Alexis Tsipras, Syriza’s firebrand leader, as he left parliament after the vote. “The Samaras government which looted society and decided to take further austerity measures is finished.”

Along with the IMF and the European Commission, the ECB played a key role in overseeing the four year €245bn bailout of Greece. “The ECB holds the key,” said Greek finance minister Gikas Hardouvelis in an interview with Greece’s To Vima newspaper on Sunday. He added: “This key can easily and abruptly turn off bank funding and strangle the Greek economy in a split second.”

Commenting on Monday’s vote, Wolfgang Schäuble, Germany’s finance minister, said in a statement: “We want to give Greece further support on its path of reform, helping it to help itself. If Greece chooses another way, it will be difficult. New elections will not change any of the agreements made with the Greek government. Any new government must keep to the contractual agreements of its predecessor.”

Opinion polls at the weekend gave Syriza a lead of 3-4 percentage points over Mr Samaras’s centre-right New Democracy party, but pollsters say it is unclear whether this would be sufficient to ensure an outright majority at election.

Greek stock and bond markets reacted with disapproval. The Athens stock market fell about 10% and Yield on the 3-year note sailed above 12%. 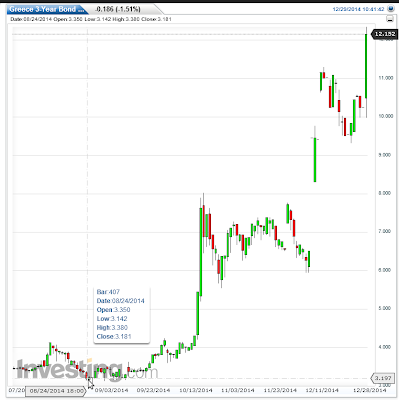 To prevent default on  €50 billion or so of Greek bonds, the Troika gave Greece a €245 billion bailout, a sum that will be impossible for Greece to ever pay back.

Yet, German finance minister Wolfgang Schäuble insists “new elections will not change any of the agreements made with the Greek government.”

Either Germany changes its tune, or Greece may default on  €245 billion. The following table shows what may happen.

The above table from European Financial Stability Facility

Who Has the Upper Hand?

Supposedly, Greece is responsible for 2.81% of its own default, quite illogical to say the least. Its portion would have to be spread out accordingly.

Spain’s portion of a Greek default (not counting the extra spread) would be  would be 11.87%.

Where is Spain supposed to get €29 billion or Italy €44 billion?

Yes, the IMF and EU could ruin Greece. But if Greece wants to play hardball, it actually has the upper hand.

One way or another, sooner or later, a significant portion of that €245 billion bailout (not of Greece, but of bondholders) will not be paid back.