Brazil is heading straight into the arms of the International Monetary Fund. The sooner this grim reality is recognised by the country’s leaders, the safer it will be for the world.

The interwoven political and economic crisis has gone beyond the point of no return. The government is frozen. The finance ministry has lost the trust of Brazilian investors and global markets in equal measure.

Almost nothing credible is being done to stop the debt trajectory spinning into orbit. Few believe that the ruling Workers Party is either capable or willing to take the drastic austerity measures needed to break out of the policy trap, or that it would suffice at this late stage even if they tried.

“There is an enormous fiscal crisis and we’re flirting with a return to hyperinflation. All the debt variables are going in the wrong direction,” said Raul Velloso, the former state secretary of planning.

“There is a loss of confidence in the ability of the government to manage its debts. We face the risk of default,” he said. Three quarters of the budget is effectively untouchable, locked in by a web of welfare payments and regional transfers. 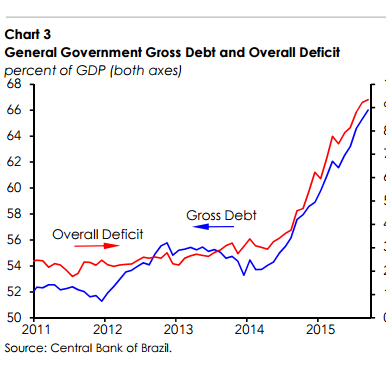 President Dilma Rousseff is battling impeachment. Whether she wins or loses over coming months, the congress is too fractured and enflamed to do much about a budget deficit running at over 10pc of GDP.

“I have the feeling that nobody wants to take any bold steps, or make any sacrifices,” said Arminio Fraga, the former central bank governor.

“Brazil ended up in this situation by doubling down on credit and fiscal expansion. It woke up with the nightmare of a paralyzed country and a ruined model that is not being corrected. It is an economic tragedy,” he told O Estado de Sao Paulo.

Mr Fraga said the collapse is desperately sad because Brazil seemed to be on the right path under president Luis Inacio da Silva, or Lula as everybody knows him.

“There was a feeling that the country was getting ahead, and then it vanished. The country suddenly lost itself completely,” he said.

It emerged this week that even Lula is under criminal investigation, the latest casualty of the Lava Jato (carwash) scandal. This began as a probe into the abuse of inflated contracts from the state oil giant Petrobras to fund the Workers Party, but is fast engulfing the country’s political elites in a broader purge – akin to Italy’s “mani pulite” scandals in the 1990s.

In a sense it is an impressive show of judicial independence. But nobody knows how this will end, and the mood is turning tetchy. The justice minister resigned this week, angry over pressure from his own Workers Party to rein in the probe.

Rui Falcão, the party chief, retorted that basic rights are now being violated by prosecutors acting beyond the rule of law. “We’re seeing the abolition of habeas corpus. It is the democracy of the country that is at stake,” he said.

Dilma lost her last chance to win back market trust  when her Chicago-trained trouble-shooter, Joaquim Levy,  threw in the towel after a year as finance minister, defeated by foot-dragging in the cabinet.

Disbelief is by now so pervasive that her government would struggle to restore confidence even if it grasped the nettle. The IMF is the only way out of the impasse.

This is not because the country needs an immediate infusion of funds to stay afloat – that is clearly not the case yet – but because it is caught in a vicious cycle that cannot easily be halted without the imported credibility of a deus ex machina. 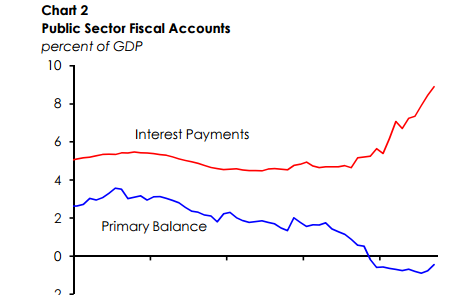 Ernesto Talvi, director of the Brookings-CERES Latin America programme, says the IMF is the least poisonous among a range of dire options.

“The only alternatives are an inflationary spiral to dilute the real value of debt, or a downward economic spiral that may cause debt restructuring,” he said.

The Workers Party will not like genuflecting before the Fund, the arch-enforcer of “neo-liberal capitalism” and the factotum of global banks in the folklore of Latin America’s Left.   Dilma may have to eat her words. “The IMF will never again command Brazilian politics,” she vowed eighteen months ago.

Mr Talvi says they have no choice. “There are times in politics when the impossible becomes the inevitable. They will realize that the IMF is their only way out,” he said.

It is a matter of some urgency for the world. Brazil is the biggest economy in Latin America by far, large enough to set off contagion through emerging markets and trigger a systemic financial event.

“Investors are already scared. There could be a run for the exits in emerging markets if anything happens to Brazil,” he said.

Mr Talvi says a pre-emptive IMF package to cover Brazil’s borrowing needs for two years could be enough to nip this crisis in the bud and set off a virtuous circle, bending down the the debt trajectory and heading off default.

What Brazil cannot do is to keep muddling through. Its stagflation predicament is the stuff of bad dreams. Inflation has risen to a 13-year high of almost 11pc but the central bank cannot tighten because the economy is in free-fall. Output contracted by 3.8pc last year. The OECD expects a further 4pc slide this year. 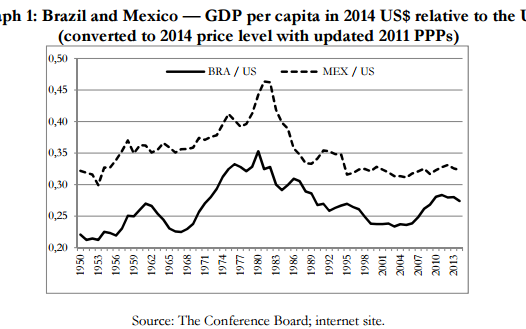 Car sales have crashed by 31pc over the last two months. The Getulio Vargas Foundation says the labour market is suddenly buckling after seeming to defy gravity, and is now shedding over 150,000 jobs a month.

Brazil’s plight is all too familiar to those who watched the eurozone crisis. The recession is so violent that it is eating into the tax base. Fiscal tightening alone is self-defeating, since it will feed the downward slide and gain little traction on the deficit.

Brazil “country risk” has already driven real rates on 10-year debt to 7pc. “If they keep borrowing at these rates it will break their back. Interest payments on the debt are ballooning, putting Brazil on an unsustainable path.”

“The IMF is the central bank and lender of last resort for emerging markets since they can’t print their own dollars. It needs to do for Brazil what the European Central Bank did in buying time for Spain and Portugal,” he said.

Just how close Brazil now is to an inflexion is hotly debated, but it is surely getting closer. Five research institutes in Brazil have warned over the last two weeks that the debt is on dangerous trajectory.

Moody’s, Standard & Poor’s, and Fitch have all cut Brazil’s credit rating to junk, with knock-on effects through the parastatal companies like Petrobras, Banco do Brasil and Caixa, and collateral damage through a nexus of companies with dollar debt.

Moody’s expects public debt to reach 80pc of GDP next year, an extremely high level for a Latin American economy with shallow bond markets. Affonso Pastore, a former central bank chief, fears that it will reach 90pc by then. 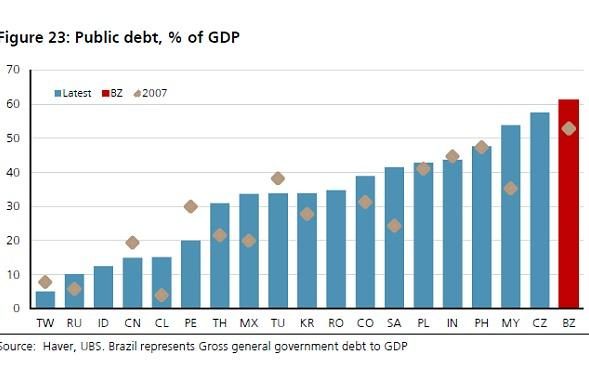 Brazil used to get into trouble for borrowing too heavily in dollars, leading to currency crises that would force it into the arms of the IMF. This time the state owes most of its debt in local reais. It is an internal debt crisis.

The country has $371bn of foreign reserves, in theory enough to stave off an external crisis for a long time. Yet Brazil is not entirely immune even on that front. Short-term foreign debt exceeds usable reserves, which are lower than they appear since the central bank has taken out $115bn of currency swaps.

Brazil’s mistakes are by now well-known. It rode the commodity boom feeding China with iron ore and raw materials, relying on an obsolete growth model that Beijing itself was determined to ditch. It let the currency rise to exorbitant levels that smothered manufacturing in a textbook case of the ‘Dutch Disease’.

Fiscal policy was too loose, forcing the central bank to tighten money. Foreign funds poured into the country in search of yield. It was a formula for an even stronger currency.  Dilma resorted to protectionist barriers. When the cycle turned and the real collapsed – ultimately by 70pc – she tried price controls.

The bonanza was squandered in a spree on social spending, even as basic infrastructure was neglected. Brazil has dropped to 75th place in the World Economic Forum’s rankings for competitiveness, 123rd in quality of infrastructure, and 135th for the number of days needed to start a business.

A blast of reform is imperative, but that is exactly what the current government is unable to deliver, and why it needs the guiding hand of the IMF – an institution skilled with such difficult wards and wearily accustomed to its role of taking all the blame.

Yet one should be a  cautious by now in assuming that a free-market shake-up will mechanically unleash the pent-up energies of Brazil. What is so striking about the last forty years is that the country has not closed the income gap with the US and Western Europe at all. This has been true even after during and after bouts of liberal reform.

The pathologies lie deeper in political anthropology. Today, Brazil’s per capita GDP is 23pc of the US level, roughly where it was in 1956. It is actually lower than in the late 1970s. The middle income trap is proving far more intractable than we ever imagined.

Source: AEP: Only the IMF can now save Brazil – The Telegraph