Something Else At All-Time Highs—-Investor Complacency

Jason Goepfert, president of Sundial Capital Research SentimenTrader had interesting articles the last two days regarding risk appetite. I asked for and received approval to post those sections of his report.

From the sentiment report on 5-14

According to a risk gauge created by [Black Rock] the world’s largest asset manager, investors have hit a new high in terms of their comfort level with the earnings power and valuation of the S&P 500.

1. Enterprise value: Market cap plus debt minus cash
2. EBITDA: Earnings before interest, taxes, depreciation and amortization
3. VIX: Estimated future volatility using S&P 500 options
The formula basically determines how confident investors are in the current valuation of stocks, given their estimated earnings potential.
We’ve been keeping an eye on it since then, and it hasn’t really gone anywhere of note. It dipped quite a bit when stocks stumbled in late January, but not to levels near prior lows. 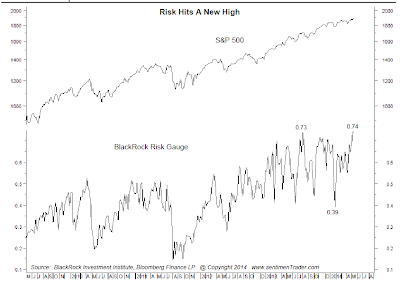 SentimenTrader has its own assessment of risk. This is from the sentiment report from 5-15

After Wednesday’s mention of the risk gauge created by massive asset manager BlackRock, a few eyebrows were raised by the latest update of the Risk Appetite Index. 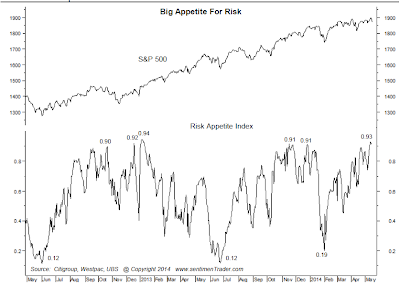 Risk Appetite takes a different tack than the measure from BlackRock, as valuation and earnings play no part in the calculations.

On February 3, the index dipped into “extreme risk aversion” territory for a total of one day, and stocks immediately rebounded. Risk Appetite has understandably increased along with stock prices, and by Tuesday it reached 93%, in the top 3.5% of all readings since 1998.

Risk Appetite tends to rebound quickly in the months following a bear market low, and it becomes less common to see such high extremes as a rally progresses.

The only time we saw an extremely high Risk Appetite when stocks were near a high, and stocks did not subsequently stumble at some point in the weeks and months ahead was the very beginning of 2013. Then, the risk indicator hit 94%, and there wasn’t so much as a hiccup going forward.

The other instances were clustered in April and November 1999 and October/November 2006. Both preceded bull market peaks, but stocks managed to chop higher for months before those peaks occurred.

The VIX on which those are partially based shows no fear as well.

Complacency at these elevated index levels is highly unlikely to be rewarded.