Something Rotten Is Piling Up: Inventory/Sales Ratio Highest Since September 2008

We do have more work to do in the US,” admitted John Bryant, CEO of Kellogg’s which makes Pringles, Pop Tarts, Kashi Cereal, and a million other things that consumers are increasingly reluctant or unable to buy. He was trying to explain the crummy quarterly results and the big-fat operating loss of $422 million, along with a lousy outlook that sent its stock careening down 4.5% during the rest of the day.

A peculiar side note: he also said that the “Russian business posted good results in the quarter and for the full year” – despite the ruble crash and whatever sanctions might have gotten in the way.

Then in the evening, ConAgra, with brands like Healthy Choice for consumers and something yummy they call “commercial food” for restaurants, cut its fiscal 2015 earnings guidance, citing a laundry list of problems, including the “strengthening dollar” and “a higher-than-planned mark-to-market loss from certain commodity index hedges.” But it blamed two operating issues “for the majority of the EPS cut: “a highly competitive bidding environment” and “execution shortfalls.”

After which confession time still wasn’t over: it would be “evaluating the need” for additional write-offs. What had gone well? Cost cutting – “strong SG&A efficiencies,” the statement called it. But the pandemic cost-cutting by corporate America represents wages and other companies’ sales.

It’s tough out there for companies that have to deal with the over-indebted, under-employed, strung-out American consumers with fickle loyalties and finicky tastes, who have been subjected to this corporate cost-cutting for years.

And so retail sales, according to the Commerce Department, dropped a seasonally adjusted 0.8% in January. That’s on top of a 0.9% decline in December. The hitherto inconceivable is happening: folks are saving money on gas, but not everyone is immediately spending all that money! It’s so inconceivable that I warned about it and other effects of the oil price crash two months ago: “Wall Street promises a big boost to US GDP,” I wrote. “What have these folks been smoking?”

But even excluding gasoline sales, retail sales were flat last month after edging down 0.2% in December. And sure, some of the savings from gasoline will be spent eventually, but there are plenty of Americans with enough money left over every month to where their spending patterns aren’t influenced by the price of gas.

But this report, an advance estimate that is subject to potentially large revisions, covers only spending at retailers and restaurants, a portion of total consumer spending, which includes healthcare and anything else that consumers pay out of their noses for. And year-over-year, retail sales actually rose 3.3%, with food services sales up 11.3%, auto sales up 10.7% thanks to prodigious subprime financing, while sales at gas stations sagged 23.5%.

So from just the retail sales report, the consumer situation remains murky.

But there is another gauge that is moving deeper and deeper into the red. It has been deteriorating consistently since last summer. A couple of days ago, I reported that wholesale inventories were ballooning in relationship to sales, a red flag in our era when just-in-time delivery and lean inventories have been honed into an art to minimize how much working capital and physical space gets tied up. The crucial inventories-to-sales ratio for wholesalers had reached the highest level since the financial crisis.

Combined sales by retailers, wholesalers, and manufacturers, adjusted seasonally but not for price changes, totaled a $1,331.2 billion, down 0.9% from November, and up only 0.9% from December 2013 – not even beating inflation.

Retailers were able to keep their inventories stable in relationship to sales, which inched up 2.6% year-over-year. So the inventory-to-sales ratio remained at 1.43.

Further up the channel, wholesalers saw sales rise only 1.43%, but their inventories stacked up, and the inventories-to-sales ratio hit 1.22, up from 1.16 a year earlier.

And manufactures? That great “manufacturing renaissance” in the US? Year over year, sales declined 0.9%, but inventories rose 2.7%, and the inventories-to-sales ratio jumped to 1.34 from 1.29 a year earlier.

For all three combined, the inventories-to-sales ratio rose to 1.33 in December, after climbing methodically since the summer. The last time it was rising to this level was in September 2009 – the Lehman Moment – when sales up the entire channel were beginning to grind to a near halt, a terrible condition that morphed into the Great Recession. That propitious September, the inventories-to-sales reached 1.32, still a smidgen below where it is today: 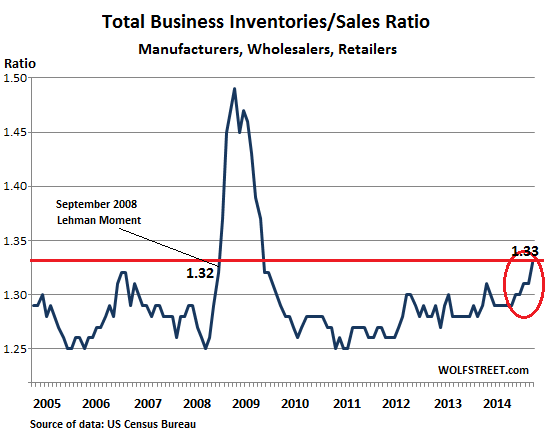 Optimistic merchants and manufacturers expect sales to rise. They plan for it and order accordingly. If sales boom and draw down inventories, the inventories-to-sales ratio remains lean. That’s the rosy scenario. But that hasn’t been happening recently.

In our less rosy reality, sales are not keeping up with expectations, and inventories are piling up. The increase in inventories adds to GDP, and so from that point of view, they beautify the numbers. But from the business point of view, growing inventories caused by lagging sales can turn into a nightmare. And unless sales can somehow be cranked up for all businesses across the entire country to bring down these inventories, orders to suppliers will be trimmed – and that ricochets nastily around the economy with all kinds of unpleasant secondary fireworks.

“Here in Houston a number of projects have been canceled, engineers are put on ‘hold,’ and everyone is waiting for the other shoe to drop,” an engineer in the energy sector wrote. “Not pushing the panic button by any means” is how the Texas banking regulator phrased it. But it’s looming in front of everyone. Read… Oil Bust Hits Office Construction Boom, Banks, Suppliers – But Hey, “So Far” No Apocalypse