Speak No Evil Financial Media Says No Housing “Inflation”, Only “Growth and Gains”

Recent media reports indicate that house prices are rising so I was curious to see how often today’s news reports on the Case Shiller house price index mentioned “inflation.” I also wanted to see just how bad housing inflation is. Lo and behold, in reading the news reports I learned that there is no inflation in housing!

A CNBC.com post on the just released Case Shiller house price index used the word “gains” 4 times and “higher” 6 times, but did not mention “inflation.”

The Wall Street Journal’s piece started with “price growth,” using the “growth” euphemism 10 times, including in the headline. “Increase” showed up 6 times. A total of 16 descriptions of the price change mentioned “Inflation” how many times? Zero.

Now, Rupert Murdoch owns both the Wall Street Journal and Realtor.com. We shouldn’t expect anything negative from the hired public relations and marketing arm of the NAR.

Bloomberg was more creative with its euphemisms. Its reporters used words like “advance, growth, prop up, gains, healthy, elevated, increased, and climbed.” The words “inflate” or “inflation?” Never.

Meanwhile, house prices do continue to inflate. Only not at the rate that Case Shiller says. Case Shiller uses a 3 month average of sales that CLOSED in August, September, and October. That means its index represents a smoothed average price change on transactions that actually took place 30-60 days before that, or the end of July on average. It’s as if the Wall Street Journal today only reported the Dow as of its 90 day moving average price from late July. Who would care about that?

Isn’t it funny that Rupert Murdoch owns Realtor.com, which has all the data on current contracts as all the Realtors around the country input the current contracts into their MLS databases in real time? Why isn’t The Wall Street Journal reporting the real time sales price data? Is there any other instrument that they report only with a 5 month lag? 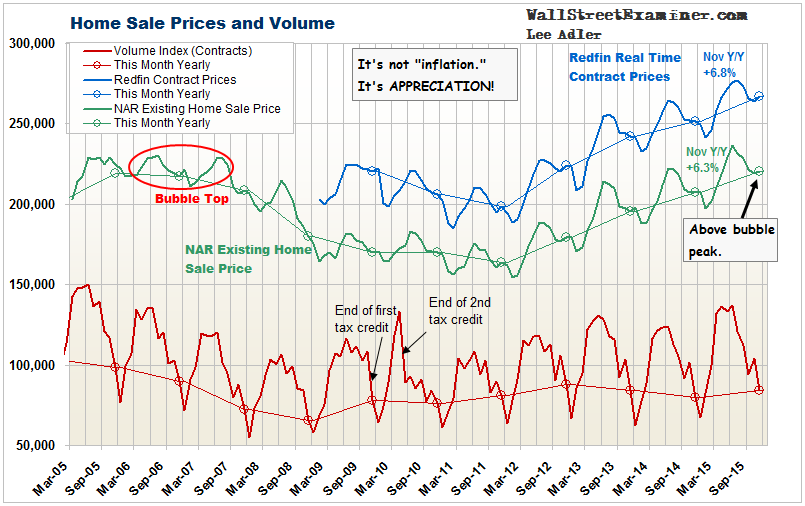 The real problem will come when prices start to decline. Case Shiller will be at least 5 months late in turning. Robert Shiller was more than a year late in recognizing that prices had bottomed in 2011-12 due to this methodology, which only a Yale economics professor and the Nobel Prize committee could imagine to be relevant. But then the mainstream media treats it as the holy grail, so maybe I’m the crazy one.

Meanwhile, suppressed inventories and modest demand will continue to stoke housing inflation until more people decide to put their houses on the market. 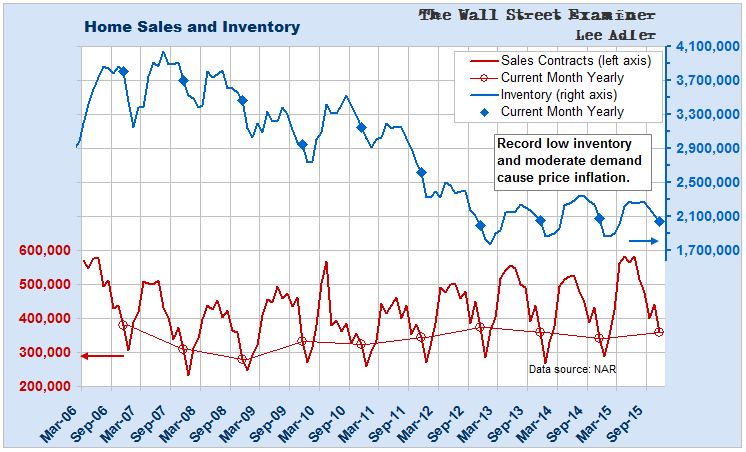 That might be when interest rates rise enough to entice retirees to sell their houses and put the resulting nest egg into an income producing cash asset. Who knows when that will be? But if an when that happens, any increase in supply would be joined by the demand constraint imposed by rising mortgage rates. The intersection of those two forces would cause prices to begin to decline.

Bob Shiller and the mainstream media will be a couple of years late in recognizing and reporting that, thanks to their slavish devotion to an absurdly flawed measure of the US housing market.

The post Speak No Evil Financial Media Says No Housing “Inflation”, Only “Growth and Gains” was originally published at The Wall Street Examiner. Follow the money!