Backlash against sheer stupidity is starting to build.

I am talking about German Chancellor Angela Merkel’s decision to ramrod an agreement that requires EU countries to accept more alleged refugees than many countries want, and even Germany itself can handle.

The backlash has finally hit Germany in a big way as was easily predictable months ago.

Hesepe, a village of 2,500 that comprises one district of the small town of Bramsche in the state of Lower Saxony, is now hosting some 4,000 asylum-seekers, making it a symbol of Germany’s refugee crisis. Locals are still showing a great willingness to help, but the sheer number of refugees is testing them. The German states have reported some 409,000 new arrivals between Sept. 5 and Oct. 15 — more than ever before in a comparable time period — though it remains unclear how many of those include people who have been registered twice.

Six weeks after Chancellor Angela Merkel’s historic decision to open Germany’s borders, there is a shortage of basic supplies in many places in this prosperous nation. Cots, portable housing containers and chemical toilets are largely sold out. There is a shortage of German teachers, social workers and administrative judges. Authorities in many towns are worried about the approaching winter, because thousands of asylum-seekers are still sleeping in tents.

But what Germany lacks more than anything is a plan to make Merkel’s two most-pronounced statements on the crisis — “We can do it” and “We cannot close our borders” — fit together. In the second month of what has been dubbed the country’s brand new “Welcoming Culture,” it has become clear to many that Germany will only be able to cope if the number of refugees drops.

Merkel’s last hope is Recep Tayyip Erdogan, the Turkish president. The chancellor is visiting Ankara this weekend, bringing with her a number of gifts that Europe’s leaders had discussed in their summit in Brussels. The plan is to persuade Erdogan to strengthen the border in the Aegean Sea that “the strong nation of Germany” (as Merkel put it) is unable to.

The griping over Merkel’s policies has grown louder within her own party, the Christian Democratic Union (CDU). The meetings of the party’s parliamentary group, which for many years radiated the boredom of an English gentleman’s club, now resemble tribunals against the chancellor. Meanwhile, Finance Minister Wolfgang Schäuble, the strong man in Merkel’s cabinet, also expressed his own dissatisfaction, in distant Peru, by cracking jokes about border controls in the former East Germany.

Merkel is looking increasingly isolated. Government sources say she has made refugee policy her personal concern, and now she is being left to deal with it on her own. Last week, Interior Minister Thomas de Maizière confided in his Luxembourg counterpart, telling him that Merkel did not have a plan, only “cold feet.”

Ralph Tiesler, deputy head of the Federal Office of Civil Protection and Disaster Assistance (BBK), had to get to grips with a real emergency situation: Tiesler is the man who distributes the refugees across Germany, the lord of the buses and trains.

Last week, his team had to pull extra shifts, after the number of new arrivals increased again on Monday night. Between 8,000 and 10,000 refugees have been arriving recently — per day.

Tiesler’s job is to organize a roof over the refugees’ heads on their first night — and then to get them on to special trains and buses as quickly as possible, to be relocated. There are five major routes distributing the asylum-seekers across Germany’s states. The “West” route leads to North Rhine-Westphalia, the “Southwest” route to Baden-Württemberg and its neighboring states.

The distribution lists are political hot potatoes. The various states fastidiously make sure they aren’t allocated more refugees than has been set down by the so-called “Königstein Key,” the agreement between the federal government and the states that stipulates how much each state contributes to national programs.

Meanwhile the weather is giving Tiesler a lot to worry about. Temperatures have fallen, the first frosts have appeared, in some places snow. Authorities are determined not to allow anyone to sleep in the wet and cold in the open air. “We have to do everything we can to prevent homelessness, and we have to organize the distribution accordingly,” he says.

Above all, members of the SPD will be watching very closely in the weeks ahead to see if and how quickly Angela Merkel shifts her position. Within her own party, the Christian Democrats, many consider it a given that she will have to change her policy. “The next party caucus is in three weeks,” says CSU domestic policy expert Uhl. “If the government hasn’t made something happen by then, then the caucus will have to act.”

Problem in a Nutshell

The problem, as I have stated on numerous occasions is quite simple: There is an unlimited demand for free food, free shelter, and free services.

Border agreements alone cannot and will not work. The Financial Times reports this evening Brussels draws up plan to resettle 200,000 refugees across Europe.

Meanwhile ponder this hyperbolic chart of refugees into Germany alone. 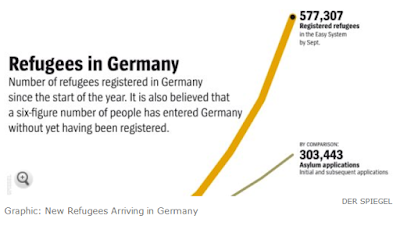 Angela Merkel, being the chameleon that she is, will soon change he colors for the simple reason she needs to. If she doesn’t, it will certainly toll the end of her “grand coalition”.

Of course, that “grand coalition” may fail for numerous other reasons as well. Indeed, I suggest no matter what the outcome of the migration, Chancellor Merkel’s ability to force the EU to her will peaked with the submission of Greece to German demands.