In a show of the stupidity by warmongers (President Obama, Hillary Clinton, Senator John McCain, etc.) who think participation in this madness makes any sense, US backed forces now openly fight other US backed forces, some of which contain US army special forces.

Elite US military forces have been photographed for the first time in Syria as they join largely Kurdish forces on an advance toward, Raqqa, the Islamic State terror group’s capital.

A photographer with Agence France-Presse captured US special operations forces with Kurdish forces known as the YPG, part of the US-mentored Syrian Democratic Forces, in a rural village less than 40 miles from Raqqa. Some US troops wear the insignia of the YPG in an apparent show of support.

Peter Cook, the Pentagon press secretary, resisted commenting on the photographs and would only describe the US special operations forces’ mission in generic terms.

This is what US Green Berets wearing Kurdish insignias looks like. 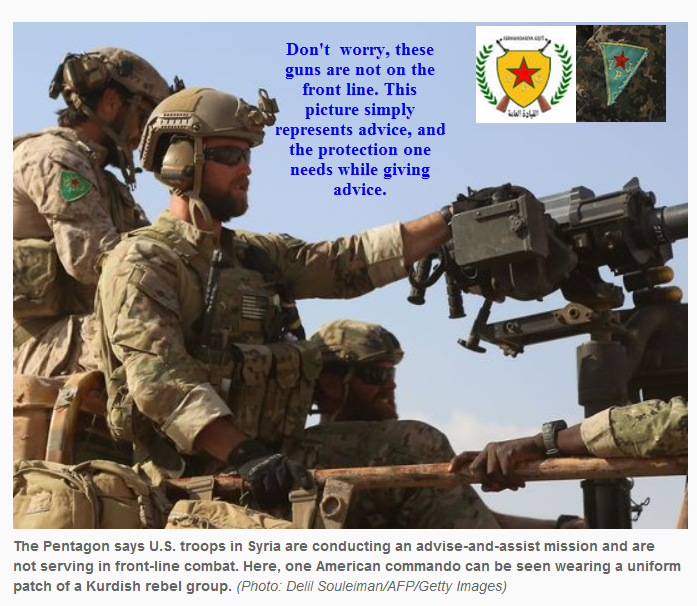 “Our special operations forces in the past have, yes, worn insignias and other identifying marks with their partner forces,” said Peter Cook.

US-Backed Rebels Fighting One Another in Northern Syria

Having clearly identified US special forces, let’s now turn our attention to who is fighting whom.

Please consider US-Backed Rebels Fighting One Another in Northern Syria.

In the northern part of Aleppo Province, territory is constantly changing hands along the frontiers between several factions, including a group that includes parts of the US-armed Free Syrian Army (FSA), the US-armed Kurdish YPG, and ISIS.

The US armed the other factions with an eye toward them fighting ISIS, and they have, sometimes. Repeatedly throughout the past several months, however, the two factions have ended up fighting one another for territory as well, with the FSA recently firing TOW missiles at Kurdish YPG positions.

FSA officials cited a “deepening divide” with the Kurds, saying the situation is heading toward escalation, with the YPG insisted they are confident they could take the FSA groups in a war if it comes to that. And it just might.

Both factions have very different views toward the region, with the Kurds looking mostly to cement gains around ISIS territory while the FSA is more focused on fighting the Assad government, with a little pushing on ISIS. But both also want their respective spheres to grow, and as they inevitably bump into one another, the US weapons they’re wielding are quickly turned on one another.

A smoldering confrontation between Syrian armed groups backed by the United States but hostile to each other is escalating, complicating the fight against Islamic State in the war-torn country.

Syrian Arab rebels under the Free Syrian Army (FSA) banner say they are in a growing struggle against the Kurdish YPG militia that are helping the United States wage its campaign against IS in Syria.

On June 12, one of the many FSA groups in the Aleppo area fired a guided TOW missile at a YPG position, the first attack of its kind, the British-based Syrian Observatory for Human Rights and YPG said.

YPG spokesman Redur Xelil said his group did not aim to spark a battle with FSA groups. But he added: “If they want a war, they will certainly lose.”

More than five years since it began, there is no end in sight to the war in Syria that has created the world’s worst refugee crisis, helped the rise of Islamic State, drawn in foreign states, and killed several hundred thousand people.

Now, the escalating clash between the two U.S.-backed groups has exposed a fault-line that presents a challenge to the anti-IS campaign as it moves into predominantly Arab areas east of Aleppo with YPG support, starting with the city of Manbij.

FSA rebels are part of the nationalist opposition to Assad, who is also being fought by al Qaeda-linked groups. A number of groups receive military aid in a covert, CIA-backed program.

Senior International Crisis Group Analyst Noah Bonsey said it would be better for all if Turkey, the rebels and the YPG struck a deal on a division of labor to drive IS from the northern Aleppo area, and on who would control it afterwards.

Turkey is deeply suspicious, however, of the Kurdish YPG because of its links with the Kurdistan Workers’ Party (PKK). The PKK has waged a three-decade insurgency in southeast Turkey.

The YPG-FSA conflict has also spilled into Aleppo itself, whose Sheikh Maqsoud district is under YPG control. Rebels accuse the YPG of aggression by firing on the only road into opposition-held Aleppo. In turn, rebels have shelled it heavily.

The TOW missile attack was a notable escalation. The YPG said it had notified the United States, saying the weapon was supplied under the U.S.-backed program.

Guide to the Syrian Rebels

I think we need a refresher course on who is who. This Guide to the Syrian Rebels from 2013 is very outdated, but it does help explain the complexity.

The opening line is a gem. “There are believed to be as many as 1,000 armed opposition groups in Syria, commanding an estimated 100,000 fighters.”

Each of those opposition groups has its own agenda. This is a view from 2013. Each of the main groups below has numerous factions. In particular, note the number of ISIS troops back then.

SMC-aligned brigades retain separate identities, agendas and commands. Some work with hardline Islamist groups that alarm the West, such as Ahrar al-Sham, and al-Qaeda-linked jihadists.

FSA: The Free Syrian Army (FSA) was formed in August 2011 by army deserters based in Turkey, led by Col Riad al-Asaad. Its banner was soon adopted by armed groups that began appearing across the country. Despite this, the FSA’s leaders had little or no operational control over what was happening on the ground in Syria. Gen Idris, wants it to be a more moderate and stronger alternative to the jihadist rebel groups in Syria.

In November 2013, seven Islamist groups – Harakat Ahrar al-Sham al-Islamiyya, Jaysh al-Islam, Suqour al-Sham, Liwa al-Tawhid, Liwa al-Haqq, Ansar al-Sham and the Kurdish Islamic Front – declared that they were forming the largest rebel alliance yet in the 33-month conflict, with an estimated 45,000 fighters. They said the new Islamic Front was an “independent political, military and social formation” that aimed to “topple the Assad regime completely and build an Islamic state”. They outlined a new command structure, with key roles shared between the seven groups, and said they would work towards a “gradual merger”.

The Islamic Front does not include al-Qaeda affiliates like the Islamic State of Iraq and the Levant (ISIS) and the al-Nusra Front, but its charter welcomes foreign fighters, as “brothers who supported us in jihad”, suggesting it is willing to co-operate with them.

The Syrian Islamic Liberation Front (SILF) is a loose alliance formed in September 2012 by about 20 rebel groups, including the Farouq Brigades, the Islamic Farouq Brigades, Liwa al-Tawhid, Liwa al-Fath, Liwa al-Islam, Suqour al-Sham, and the Deir al-Zour Revolutionaries’ Council. Most of the groups, which ranged from moderate Islamist to ultraconservative Salafist in outlook, recognised the SMC and made up the bulk of its fighting force. In November 2013, Liwa al-Tawhid and Suqour al-Sham declared that they were joining the new Islamic Front, significantly reducing the SILF’s military strength and raising questions about whether it would be disbanded. It is not clear if the remaining members of the SILF will continue to fight under its banner or join the Islamic Front.

Nusra: The Nursa Front for the People of the Levant, is a jihadist group believed to have been created in mid-2011 with the help of the Islamic State of Iraq (ISI), a militant umbrella group that includes al-Qaeda in Iraq (AQI). It declared its existence in January 2012 and has since emerged as one of the most effective rebel forces.

Islamic State of Iraq and the Levant (ISIS): Estimated number of fighters: 3,000 to 5,000. The creation of the Islamic State of Iraq and the Levant in April 2013 was rejected by the al-Nusra Front. ISI’s leader, Abu Bakr al-Baghdadi, known as Abu Dua, nevertheless pressed ahead with expanding its operations into Syria. In August 2013, US intelligence assessed that he was based in Syria and commanded as many 5,000 fighters, many of them foreign jihadists.

The Popular Protection Units is the armed wing of the Kurdish political party, the Democratic Unity Party (PYD), an affiliate of the Kurdistan Workers’ Party (PKK) that runs the de facto autonomous Kurdish zone in north-eastern Syria. The YPG emerged as a force in the summer of 2012 when the Syrian army withdrew from Kurdish areas and it sought to provide security. The PYD has tried to keep the Kurds out of the conflict and consolidate its territorial gains. However, there has been occasional fighting with government troops, and since November 2012 also deadly clashes between the YPG and rebel fighters – particularly those from Islamist and jihadist brigades – over control of several border towns and parts of the city of Aleppo. The Syrian rebels and the Turkish government have accused the Kurdish group of acting as an Assad proxy.

It was absolutely idiotic to believe we could identify “moderate” rebels out of that mess or that they would stay “moderate” if we could.

Today, US special forces wear the YPG insignia to the shock of Turkey.

On May 28, Erdogan Slammed Washington Over US soldiers’ Use of YPG Emblem

In a Saturday speech in the mainly-Kurdish city of Diyarbakir, Erdogan “condemned” Washington as not being “honest.”

“Those who are our friends, those who are with us in NATO, should not and cannot send their soldiers to Syria with the sign of the YPG,” said Erdogan.

Turkey accuses the YPG of being linked to the Kurdistan Workers’ Party (PKK) militant group, which has been engaged in a three-decade fight for autonomy in Turkey’s Kurdish-dominated southeast.

Ankara and Washington both regard the PKK as a terrorist organization. The United States does not consider the YPG to be a terrorist group.

Inquiring minds may be wondering about the difference between YPJ and YPG. The Kurdish Project explains YPJ is All-Female Brigade of YPG.

The YPJ is an acronym whose translation means “Women’s Protection Units.” It is the all-female brigade of the YPG, the armed forces of the Syrian region of Kurdistan, known as Rojava (meaning Western) Kurdistan.

The YPJ have been instrumental in the battle to take back control of Kobani from ISIS. These women fighters know that, if captured, they will be raped and killed; therefore they fight knowing that they must succeed in battle or become a suicide warrior to avoid being captured. The YPJ is also thought to be feared by ISIS, who believes that if a female kills them in battle, it will be a disgrace and dishonor, and will prohibit them from entering paradise.

Thanks to their role in liberating Kobani in Syria, the YPJ have captured the attention of both socialist and non-socialist feminists around the world. Additionally, thanks to the YPJ, millions of people around the world have been introduced to the plight of the Kurds in Syria and beyond.
YPJ in Iraq

The YPJ also played a big role in rescuing and providing security to the Yazidi community who were trapped on Mount Sinjar in Iraq in 2014. This rescue helped save thousands of Yazidis who had taken refuge on Mount Sinjar and fought thirst and hunger for months, including a large population of women and children.