Thanks For The Cheap Mortgages, Fed—-First Time Buyers At Lowest Level In 3 Decades

By Laura Kusisto at The Wall Street Journal

The share of U.S. homes sold to first-time buyers this year declined to its lowest level in almost three decades, raising concerns that young people are being left out of an otherwise strong housing-market recovery.

First-time buyers fell to 32% of all purchasers in 2015 from 33% last year, the third straight annual decline and the lowest percentage since 1987, according to a report released Thursday by the National Association of Realtors, a trade group.

The historical average is 40%, according to the group, which has been recording such data since 1981.

The housing market is on track for its strongest year for sales since 2007, but the dearth of younger buyers could pose long-term challenges, economists said. Without them, current owners have difficulty trading up or selling their homes when they retire.

If home prices continue to rise sharply it will become even more difficult for new buyers to enter the market. The median price of previously built homes sold in September was $221,900, up 6.1% from a year earlier, according to the NAR. The median price for a newly built home rose to $296,900 in September from $261,500 a year ago, according to the Commerce Department.

“The short answer is they can’t afford it,” said Nela Richardson, chief economist at Redfin, a real-estate brokerage. 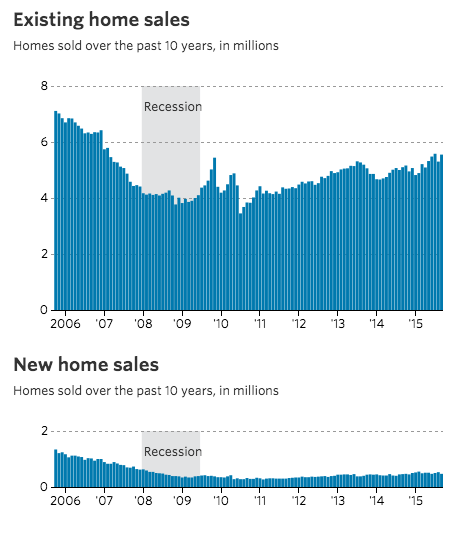 “When you wait 10 years to buy a house, you’re missing out on a pretty steady source of equity,” she said. “That equity has helped previous generations do all kinds of things, like retire.”

A quarter of first-time buyers said their biggest challenge was saving for a down payment. Of those, a majority said student loans were the main obstacle.

Fannie Mae CEO Timothy J. Mayopoulos said on Thursday that although lenders are loosening home-loan requirements, some are still eschewing borrowers who would qualify under the mortgage-finance company’s guidelines but are on the riskier end of the credit spectrum.

Mr. Mayopoulos also said a large number of first-time buyers and other borrowers aren’t applying for loans because they don’t think they would qualify, even if they are likely to get approved.

“Among millennials and people generally, folks are living more conservatively than they did in the past. They are managing their affairs in a very cautious way,” Mr. Mayopoulos said. “What we’re experiencing is a little bit of a natural reaction to this very difficult economic period that we went through.”

Economists also said rents, which have jumped 20% over the last five years, have made it difficult for younger households to put money aside.

Toby Bozzuto, president and chief executive of the Bozzuto Group, a Washington-area builder, said tenants in his buildings are paying rents “considered commensurate with a mortgage payment” to live near good restaurants, shorten their commutes and enjoy amenities such as having their trash picked up right outside their doors.

Many economists predicted 2015 would be the year when first-time buyers would finally make a comeback, as job and income growth accelerated, mortgage rates remained low and the memory of seeing relatives battered by the housing bust started to fade.

“I thought we would see some pick up in the first-time buyers given that the economy has been expanding for years,” said Lawrence Yun, NAR’s chief economist. But “there are some hurdles to overcome.”

A quarter of first-time buyers used a gift from a friend or a relative for their down payment. Those buyers tended to be slightly more affluent and to buy bigger homes than similar buyers in 2014.

The NAR report is based on a survey of more than 6,400 households that purchased a home between July 2014 and June 2015.

News Corp, owner of The Wall Street Journal, also owns Move Inc., which operates a website and mobile products for the NAR.