Thanks, Janet—-Mayhem In The Treasury Market, ‘Fails’ Soar

Over the past week we have been following a disturbing development in the US Treasury market: while the repo rate on the 10Y has been sliding deep into negative territory for a while, on Friday it finally hit the “fails charge” of -3.00%, suggesting there is a massive shortage of Treasury paper as a result of wholesale shorting by various market participants.

Back then we explained the move as follows: “[as of this moment] the repo rate can’t go any lower, and any demands to cover Treasury shorts are met with “Delivery Failure” notices. For those who are unfamiliar,  a “Delivery Failure”occurs when one party fails to deliver a U.S. Treasury security, Agency Debt or Agency MBS to another party by the date previously agreed by the parties (Sifma has more). It also means that there is an unprecedented (and based on the historical data, record) amount of shorts who would rather pay the fails charge than to cover their positions on the delivery demand, or alternatively, there is simply not enough Treasurys in the private market that are not locked up in short positions. Finally, this means that the panicked scramble by various entities, including central banks, to short US Treasurys continues unabated.”

Over the weekend Bloomberg picked up on this with a note titled “The Treasury Market’s Big Short Is in 10-Year Notes, Repos Show” in which it reiterated as much:

Demand is so great for benchmark 10-year Treasuries in the $1.6 trillion market for borrowing and lending U.S. government debt, and supply is so short, that traders are willing to pay to lend cash to get their hands on the issue.

The overnight repurchase agreement rate on the newest 10-year note was negative 2.9 percent at noon New York time Monday, the lowest for any Treasury note or bond, according to ICAP Plc data. In the parlance of the repo world, that means the maturity is on ‘special,’ signaling heightened appetite for this specific security in deals where traders exchange the debt for overnight cash. In agreements lasting one month, the rate was as low as negative 1 percent last week, the most special since mid-2008, according to JPMorgan Chase & Co.

While futures traders have been short the maturity for about a year, the scramble in the repo market has intensified as the availability of the notes in cash dealings has dwindled.

There is more to it but the gist is clear: everyone is short the 10Y.

Today JPM confirmed as much when it said that according to the Treasury Client Survey for the week ended March 7, active clients were the most short since November 23; broken down as follows:

And then we got the latest repo data, where we find that the shortage has never been worse!

According to ICAP, the current 10Y remains at the “fails charge” of -3.00% in repo, which according to Bloomberg is a “reflection of the increasing short base and shortage of the security, which the Fed cannot alleviate because it doesn’t hold much of the issue.”

Worse, the shortage at the 10Y has now drifted to the long end as well as someone is absolutely desperate to keep yields higher. More from SMRA:

And the shortage has even migrated to the short end! “The 3-year note is also trading special at -20 basis points this morning ahead of its auction this afternoon.”

In short, pardon the pun, there is no OTR paper available at all!

To be sure, some optimists continue to hold out hope that new 10Y supply will “clear up the fails” although that is precisely what they said when the Treasury issuance announcement was made last week. It did not help.  Meanwhile, the demand for paper is about double what is available: just yesterday, dealers took $905m of $906m 1.625% Feb-26 security available, after requesting double this amount or $1.822 billion. 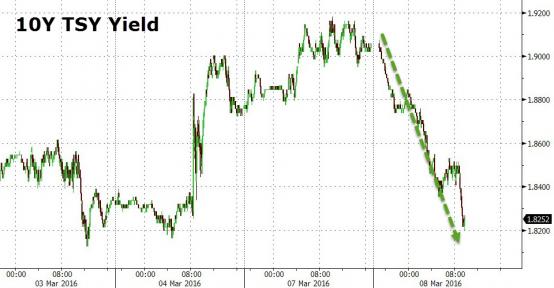 So after two consecutive market-wide squeezes, with oil on Friday, then Iron Ore on Monday, is today the day the short trap for Treasury bears is finally sprung and the 10Y pulls a “crude” and soars? Find out soon.