Look at it this way. If the European economy was growing wouldn’t it have increasing cash flow? And wouldn’t the increased cash flow show up in European banks, either in deposits or loans or both? Well, it should, but the only increase in those numbers appears entirely due to some phony baloney shenanigans between the ECB, its bank customers, and among the banks themselves.

Sure there’s been a bounce in bank assets and in deposits since the beginning of the year. But that seems mostly due to the ECB’s giant €245 billion TLTRO (Targeted Long Term Refinancing Operation) loan program floated in March. The purpose of that program was to stimulate bank lending to businesses and consumers. The ECB pays the banks a bonus on taking that money and hitting lending targets.

The bank data got a big boost from this program in March, just like it did with the first TLTRO in 2014. But just as in 2014, there was little or no follow through in April in the various data series. Within a few months of the 2014 operation most of the funds had disappeared from the European system. The loans were either quickly repaid or the funds moved offshore, partly to the US where they helped to fuel the bull markets in stocks and bonds.

Even the growth spawned by the TLTRO seems mostly due to lending scams between the banks. Almost none of the money is showing up in household or business borrowing where it is supposedly targeted. Instead (Surprise, surprise!) it gets shunted off into financial engineering schemes.

Bank assets remain down by 9.2% since mid  2012 and down 2.5% from a peak in early 2015, after the first TLTRO operation. The second big TLTRO operation in March had negligible effect.  Banks and investors continue to move cash assets out of the continent as fast as the ECB prints it. 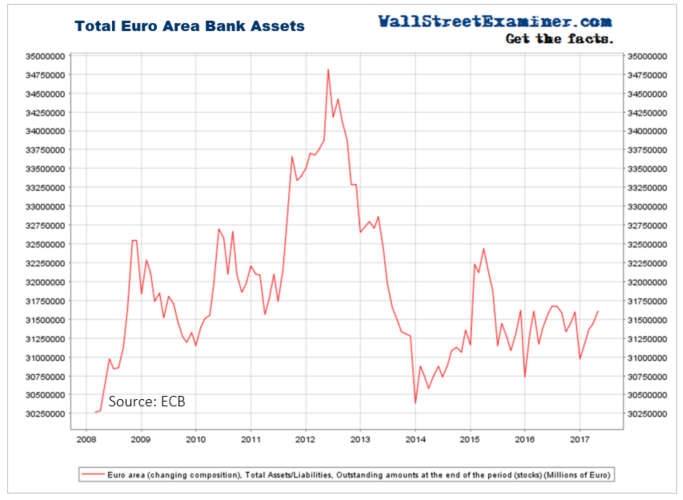 Total bank loans rose by 0.04% in April after a gain of 0.5% in March. This is right after the ECB’s big TLTRO program in March that was supposed to stimulate lending. It didn’t. The total year to year gain was 0.6%. The year to year gain in the prior 12 months was also 0.6%.
Hardly a reason for the ECB to proclaim , “Great success!” Unless they were channeling Borat.

The total outstanding is still down 3.9% from the 2011 peak. It has gained only 2.1% since the ECB began imposing negative interest rates (NIRP) in September 2014 (announced in June 2014). The policy has utterly failed to stimulate credit expansion. 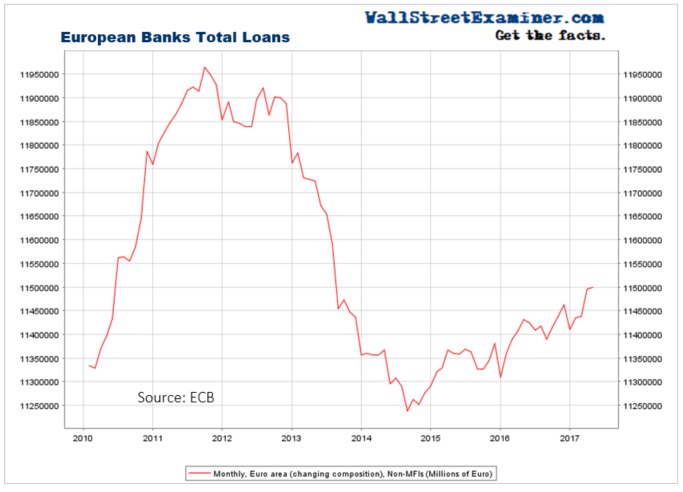 Contrast that 2% growth with the current US loan growth rate of 3.9% and 17% total loan growth since the Fed ended QE in October 2014, just as the ECB was cranking up its QE and NIRP programs.

The ECB may be deathly afraid of what would happen if they stopped injecting cash into the system every month. The €60 billion a month it is now injecting via outright bond purchases, aka QE, might be just enough to give the system the appearance of stability, if not health. The ECB is like the methadone clinic of the European banking system, sustaining the addict indefinitely with a maintenance dose of the drug. Some are now advocating that the patient is well enough for the support be removed.

At the end of April the ECB announced that it would cut its bond purchases to €60 billion per month. We also started to see trial balloons floated about ending QE. No timetable has been set, but once central bankers put an idea on the table, it’s just a matter of time until it becomes reality.

The gains in bank lending in Europe have been entirely in household borrowing. Household debt to banks rose 0.2% in April, down from 0.4% in March. Annual growth was 2.4%. The annual growth rate was +2.3% a year ago, but zero in April 2015. I guess that’s progress. In any event, it’s weak growth, indicating that few Europeans want to borrow regardless of how low rates are. Europeans have no confidence in their economies. 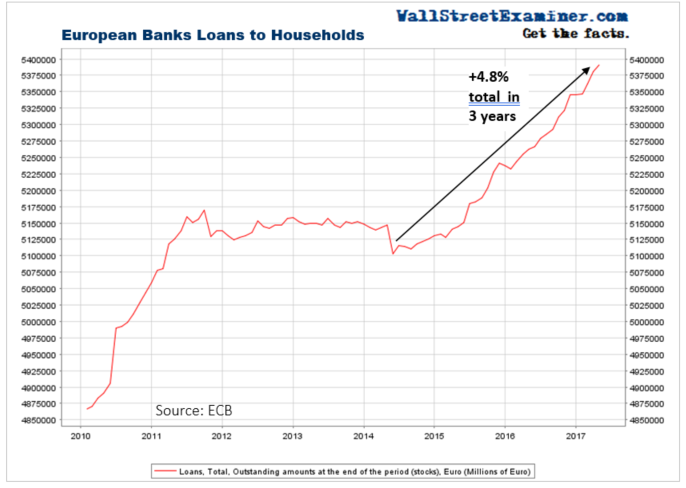 Household revolving credit remains in a vicious downtrend. Revolving credit fell 1.8% in April, after a pause in March. It is down 4.1% year over year and down 13.8% since NIRP started. Apparently, Mario Draghi, in his infinite wisdom, forgot that to avoid negative carrying costs of deposits people might use their deposits to pay off debt. 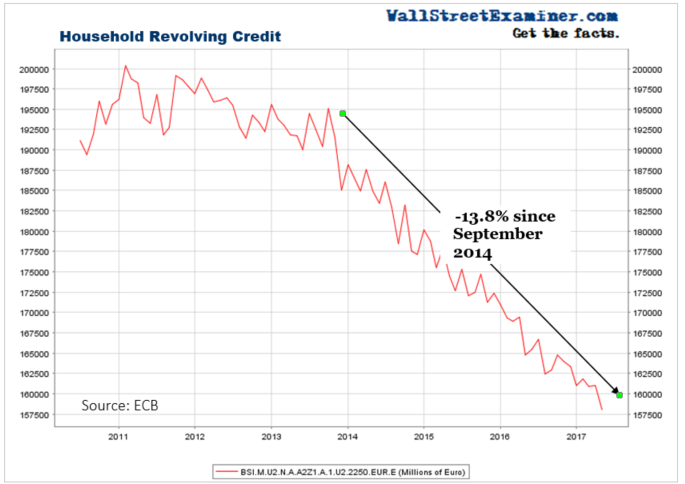 Business loans to nonfinancial corporations (NFC) (similar to the Commercial and Industrial Loans stat for US banks) rose by 0.07% in April. That followed a 0.06% gain in March. That’s one one-hundreth of one percent. They are up 0.7% year to year. Progress! Total loans to NFCs are still in the range that they were in immediately before the ECB started NIRP in 2014. If NIRP and QE and TLTRO were meant to stimulate business borrowing… FAIL. 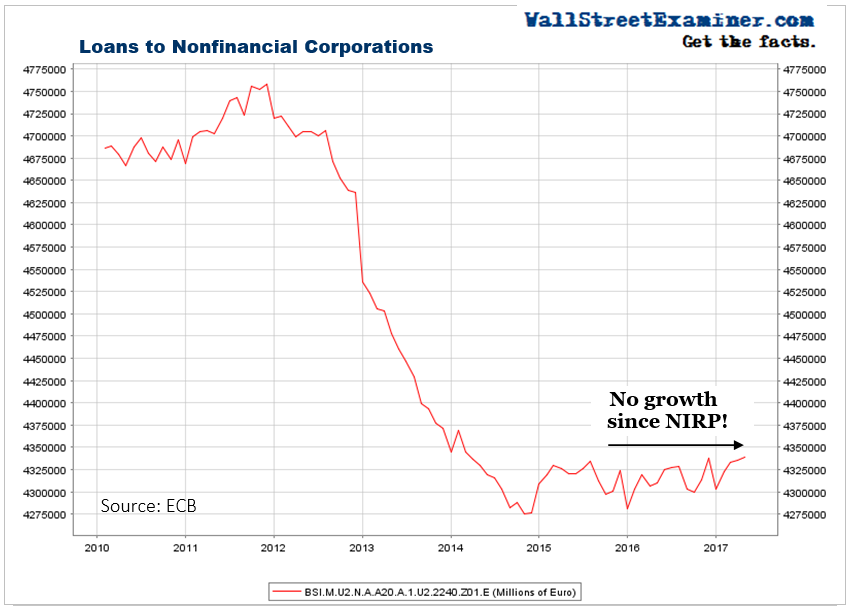 Business revolving credit dropped 0.8% in April, breaking a 3 month dead cat bounce. It is still down 5.5% year over year. The 60-billion-euro spike in December 2014 coincided with the first TLTRO issue. 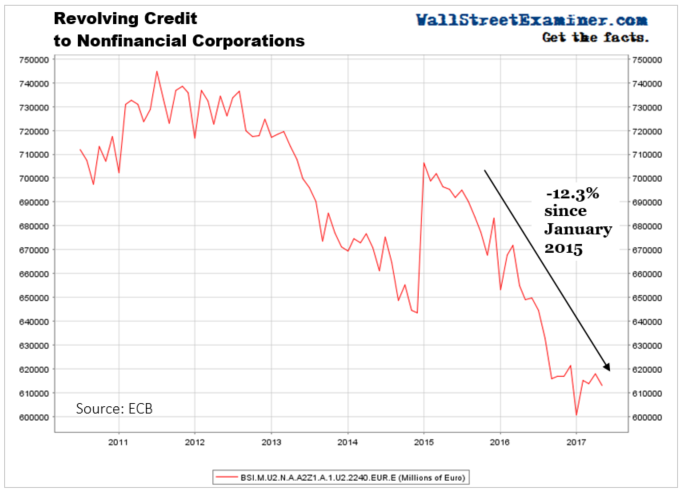