In November, Greeks withdrew €220 million from banks. In December, the figure soared to €3 billion.

My advice to Greeks is simple: Get out while you still can. That means now!

The term “banking yard” is in reference to what happened to Cyprus depositors. What follows is my translation of the article.

According to initial estimates, Greeks withdrew €3 billion from their bank accounts in December. €600 million of that total came on December 29, when Greece failed to elect a new president, thereby forcing national elections on January 25.

In comparison, November when net outflows totaled about €220 million.

The risk of bank runs in Greece is reactivated. In this sense, just remember that since 2010, when the crisis hit the euro, the Greek bank deposits dropped 37% but even after the rescue by the troika, deposits never recovered. This data demonstrates strong distrust by Greek depositors of the monetary union. 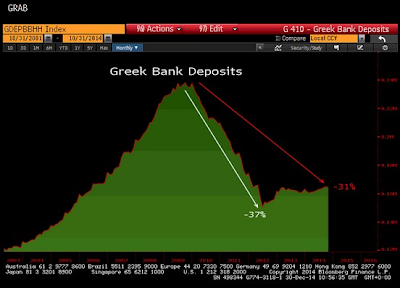 The Greek financial system is artificially sustained by the ECB, the lender of last resort. It survives because the ECB accepts junk debt (including Greek state bonds) as collateral. If the ECB were to cut support, the Greek banking simply would close and the government would set strict limits on the withdrawal of deposits.

On Thursday, the ECB said that its funding to the Greek banking system depends on the success of the current bailout program and a subsequent agreement in Athens with the EU and the International Monetary Fund (IMF).

The rating agency Moody’s also warned Thursday that the growing political uncertainty in Greece is damaging the liquidity of Greek banks, causing an outflow of deposits. 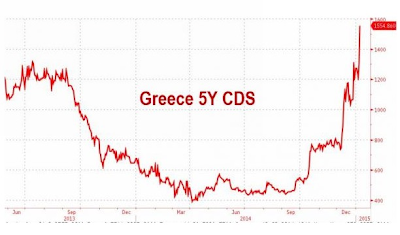 Fear not only grows among depositors. Investors also show their misgivings by their rejection of the Greek public debt. The yield on Greek ten-year bonds has just surpassed the threshold of 10% for the first time in 15 months, while the risk of sovereign default is increasing, as reflected in the price of credit default swaps of Greek debt, now exceeding 1,500 points.

The yield curve reflects the weight haircuts would have on shorter-term deposits.

Get Out While You Still Can

The important message to Greeks is get out now, while you still can. If this panic escalates, Greece may very well respond with capital controls, even before the election. Those who do not get out while they can may suffer devastating consequences.

As the chart of deposits shows, the smart money left long ago and did not return. I don’t know where it went, but all European banks are suspect.

If I were a Greek citizen, I would personally worry that any euro-denominated bank (not just Greek banks) would confiscate my money.

For short-term needs, consider US dollars or euros, in hand, not in bank safe deposit boxes. For mid- to long-term needs, US treasuries (or US treasury ETFs), and gold look attractive, especially gold.

In spite of all the attacks by mainstream writers on gold, it was still the second best performing currency in 2014.

There is no reason to hold any money in Greek banks and every reason not to. Get out!