That Was Quick! How The Fed Ravaged The Main Street Housing Market, Again

Now that the $5k suits are riding out of town on their John Deere lawnmowers, the “flash” boom in housing prices during the past 20 months is showing its true nature. It was the handiwork of the Fed’s free money gift to Wall Street. In less than two years more than 400,000 busted mortgages were scooped up by LBO funds on the theory that single family suburban housing had become a new “asset class”—-and that the “buy-to-rent” investment models put together by spreadsheet jockeys was the next Big Thing.

There was even going to be a new version of the Wall Street slice-and-dice machine—this time in the form of securitized rental payment streams rather than mortgage payments.  That way renters in Scottsdale AZ could send their rent checks to Wall Street where they would be forwarded in pieces to the proverbial Norwegian fishing village retirement fund.

But the grand scheme didn’t attain lift-off—other than to drastically and suddenly inflate housing prices in the default-ridden lower-end of the bombed-out sub-prime housing markets. In some areas, prices exploded upwards by 25-50% in less than two years, but that wasn’t evidence of healing and recovery as was so loudly brayed by Wall Street and Fed economists.  It was just fast-ignition hot money piling into another momentum trade.

All the other factors which were supposed to get better according to the spreadsheet models, however, didn’t track their appointed paths. In the real world the cost of rehabbing the foreclosures purchased in bulk on the courthouse steps ended up higher; vacancy rates fell more slowly than modeled; renter churn was greater; maintenance costs were higher; rents rose more slowly; and the Norwegian fishing villages were not quite so eager to buy the latest product from Wall Street’s meth labs.

Add to all the above, the 130 basis point surge in the home mortgage yields in recent months, and suddenly a whistle blew on the buy-to-rent stampede. It stopped nearly dead in the water during the past four months, and now there is growing evidence that Wall Street landlords may be trying to liquidate their hastily acquired properties—and not just because they have discovered crabgrass in the lawns, insects in the trees, mold in the basement and vermin in the attic.

The fact is, Wall Street’s financial models didn’t work—even if the LBO shops were able to carry their surging property inventories on cheap, Fed-enabled bank lines. Instead, prices fired-up to rapidly while all the operating variables of the rental models came out of the gates too tepidly.

So the monetary central planners have now created yet another mess in the Main Street housing markets. The flash boom slammed affordability for organic buyers—first time and trade-up alike—and thereby has generated “demand destruction”, not healthy recovery.

Under the economic rule that price follows volume, the next phase should be even more combustible than the flash boom. Namely, if housing prices head south again, the LBO funds will be forced to liquidate their inventories—-and they won’t be deliberate about it.

Perhaps then the torches and pitchforks will finally come out. Meanwhile, the three graphs below put a fork in the phony housing recovery narrative.

First, the March plunge of new home sales was not due to the weather. In fact, the bone-dry and seasonably warm West experienced a deep drop whereas the arguably weather impacted Northeast had a modest gain. 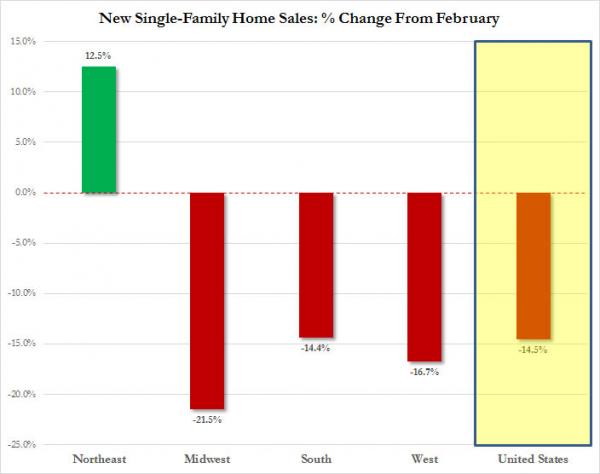 Secondly, new home sales have not recovered a bit relative to historic trends. What we have had was a swiggle in the sub-basement. 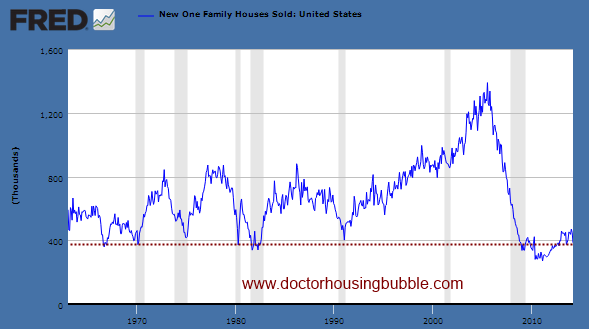 Thirdly, the argument that sales are weak because there is no supply does not hold up. Supply has been rising for months—but only recently did sales start to roll-over on a year/year basis. That is, when the suits on their John Deere lawnmowers began heading out of dodge. 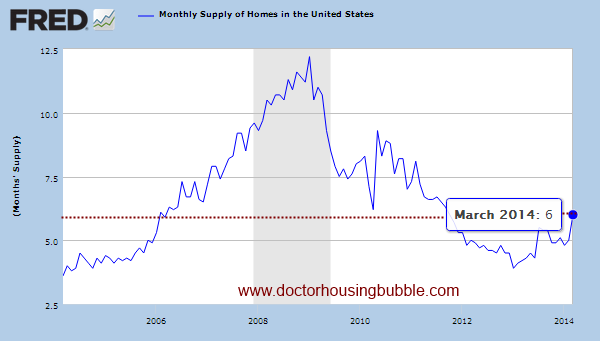