When we first warned that something was breaking in the American auto market, the Phil-LeBeau-ians crawled out of the woodwork to explain how everything is still awesome (brushing the weakness in stocks) despite soaring inventories and shrinking credit. Then when used-car prices began to leak lower, a few paid attention and therecent weakness in new car sales has shocked most. Now, however, used-car-prices are plunging at a similar pace to 2008… 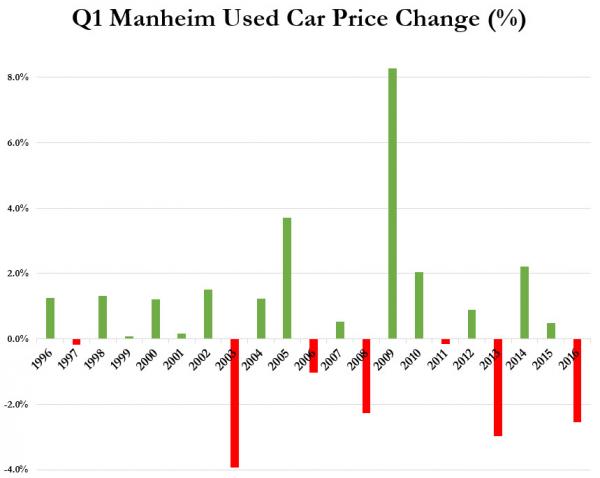 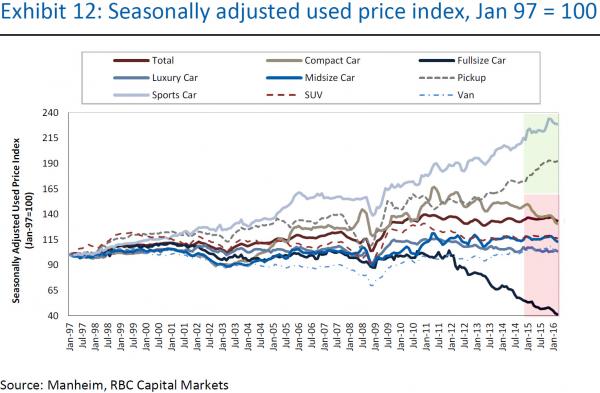 Is “the card that brings the whole house down.”

The reason for concern is lower used vehicle prices have a potential spillover effect to many other industry factors.

If we think about volume, price, mix, credit – all have been incredibly positive and supportive of the recovery. All are also no doubt related, but that’s what makes it a bit scary.

Now let’s think about the unwind.

Lower used vehicle values mean lower trade-in value which means lower vehicle affordability. Maybe the consumer is underwater (especially if bought on longer term loans). New volumes could decline if the consumer holds off (or looks to the secondary market). Mix worsens as the consumer affordability is lower. ATPs decline as OEMs incentivize to keep volume and/or mix going. Captive finance companies may write down lease portfolios. In general, monthly payments go higher which raises the credit risk which in turn means auto loan rates could increase which could then stymie demand/mix.

It should not surprise many then that US Auto Sales (SAAR), via WARD’s Automative Group, tumbled 3.5% YoY to end March – the biggest YoY plunge since July 2009 (pre-Cash-for-Clunkers)… 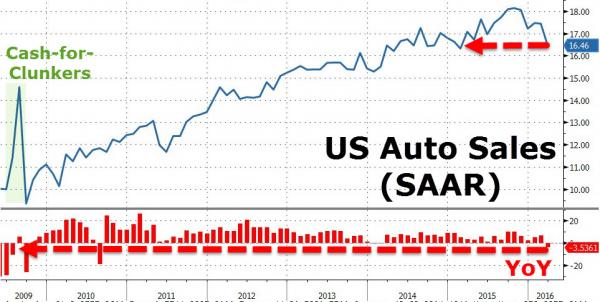 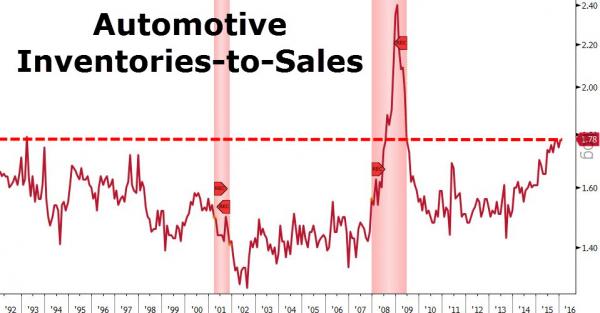 None of this should be a surprise to readers, as we noted previously, Tommy Behnke in Mises Daily predicted that auto prices will fall as the bubble bursts from the artificially created demand generated from excessive credit creation.

Behnke pointed out that car production has increased a whopping 100 percent since 2009, but that apologists for government’s monetary stimulus programs see this fact as proof of the success of their Keynesian, aggregate demand hypothesis.

Behnke, on the other hand, took the Austrian perspective that the government has simply substituted a bubble in subprime auto loans for the bubble in subprime home loans. As defaults rise and automobile loan credit tightens, the result will be the same. Namely, a flood of used cars, and falling prices. The same happened with homes following the burst of the last bubble: a flood of “used” houses, and falling prices.

Surprisingly, the article attracted a number of reader comments predicting that used car prices would not fall, allegedly due to increases in complexity of cars or increases in the difficulty of repairing them. Another suggestion was that large dealers will dominate the used car market and simply raise prices at will.

While it’s certainly true that government interference – such as Cash for Clunkers – can raise the prices of cars, it is not true that private dealers (or any other private party) can simply raise the price. More complex and difficult-to-fix cars will not keep prices from falling in an environment in which the inventory of used cars is increasing.

There is one thing that we can know a priori: that an increase in the supply of some good or a drop in its demand will cause its price to be lower than that which it otherwise would be. There is no other way to clear the market.

Mises explained that, eventually, even a monopolist would prefer any price to zero price. Maintaining a price above the market clearing price produces zero revenue. In a flooded used-car market, car dealers must reduce their prices in order to avoid bankruptcy. Otherwise, the used car dealer ceases to be a dealer and becomes a collector. The laws of supply and demand have not been rescinded, even in a world with very expensive-to-build and complex cars. As the automobile bubble bursts, quality used cars will flood the market, creating a buying opportunity for those with cash.

As with houses, it doesn’t matter how big or luxurious or complex you make new cars. When the credit bubble bursts, auto prices will not “always go up.”