The Bank of the People Was The Tip of the Iceberg – Who’s Next?

Every month I trot out a list of charts of bank deposits in Europe’s bigger dead sister banking systems, Italy, Spain, Portugal, Ireland, and Greece. I wasn’t going to recount them here this month because there was really nothing new to report. They were all still either declining or lying there dead in the water in April, just like every month before.

But now we do have something new that makes this a little more topical–the collapse and takeover of a big Spanish bank, Banco Popular. Unlike  in the case of the Cyprus bank collapse, no depositors took losses, so far, but junior bondholders were wiped out.

This development was apparently triggered by an outright public run on the bank that had run out of control. The Financial Times reported:

Banco Popular was the victim of the eurozone’s first large-scale bank run, which triggered the urgent need for regulators to intervene and engineer its rescue this week, a senior official at the European Central Bank has said.

“The reasons that triggered that decision were related to the liquidity problems,” Vitor Constâncio, vice-president of the ECB said on Thursday. “There was a bank run. It was not a matter of assessing the developments of solvency as such, but the liquidity issue.”

The ECB’s regulatory arm stepped in on Tuesday to declare that Popular was “failing or likely to fail”, which placed the bank in the hands of the Single Resolution Board, the eurozone’s new body for handling failing banks.

After European regulators took control of Popular on Tuesday, they wiped out the struggling lender’s shareholders and junior bondholders, and sold it for a symbolic €1 to Banco Santander, its bigger rival.

The move was prompted by a warning from Popular to Spanish authorities on Tuesday afternoon that its depositors were withdrawing money so quickly that it would not be able to open the next day unless a solution was found, according to two people involved in the deal.

So this is a first. But this is certainly not the first bank run. All of Europe’s problem countries have been subject to massive, system wide bank slow motion runs over the past few years. The question becomes, whether, now that a big domino has publicly fallen, others might follow.

I showed in the previous post how interbank deposits have fallen in Europe. This has been a silent run by banks pulling their own deposits out of other banks in Europe. It appeared to get a break in the past couple of months, but this was almost certainly due to an injection of funds from the ECB via its TLTRO program. 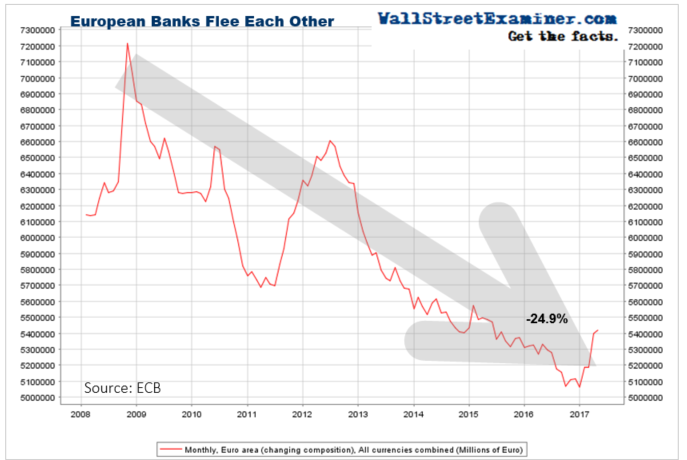 The worst of these interbank runs has been in Germany, where Deutsche Bank’s problems have been well known.  France has held up better, but has still had a significant decline in interbank deposits.

Stunningly, German and French interbank deposits continued falling after the beginning of QE and NIRP in late 2014. The current bounce has mostly been associated with the March TLTRO.   France has recovered to the upper limit of the downtrend this year. Germany has had a bounce but is still well below the levels at the beginning of QE and negative rates (NIRP). 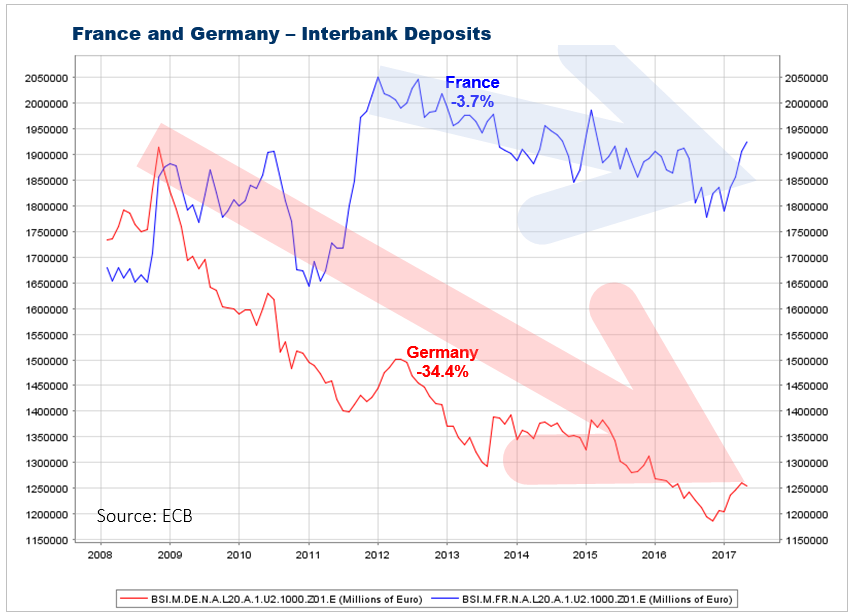 NIRP encourages banks to extinguish deposits by paying off loans, or to move them out of the European system to subsidiaries elsewhere, particularly in the US.  Yet ECB central bankers refuse to admit that NIRP has had this effect, and that it has run counter to the ECB’s stated goal of stimulating inflation. Instead it encourages deleveraging and the export of cash out of the system.

I showed you the total deposit levels in these countries in Friday’s post. The decline in interbank deposits hasn’t shown up in total deposits because households and nonfinancial corporations are still adding deposits in France and Germany.

Total deposits are holding up in Italy, but that’s only because of ECB money games, and a circle jerk of Italian government rescues of virtually failed Italian banks.

Italy is the biggest. The sickness in its banking system has been papered over.

Deposits in Italy rose by €18 billion or 0.7% in April. They had a massive spike in March, jumping by €106 billion. That has the fingerprints of the ECB and its March TLTRO program all over it. That program injected €230 billion into Europe’s banks. 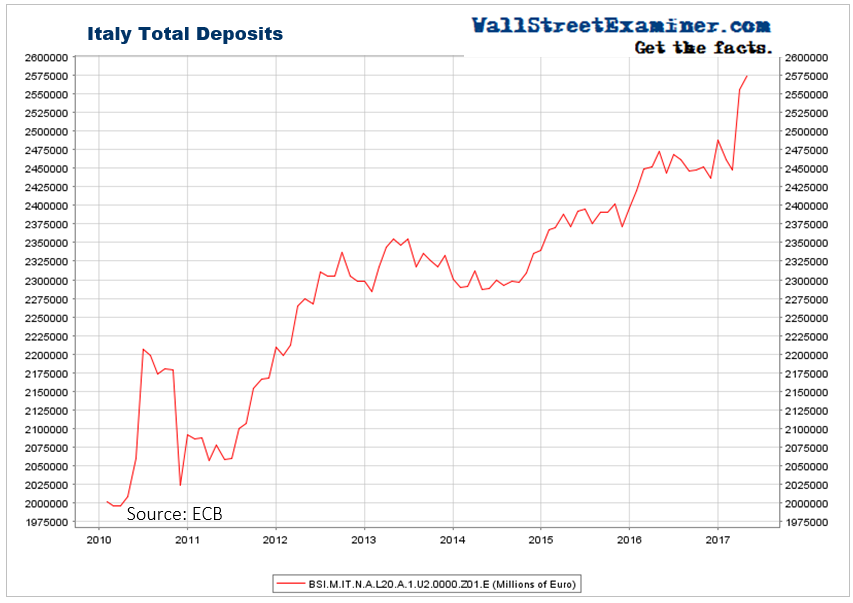 The prior uptrend in Italian bank deposits also looks like something that the ECB and the Italian government are behind. Italy is simply too big to fail. The Eurogroup and ECB can play hardball with tiny Greece and the €100 billion in deposits that remain there. But Italy with €2.58 trillion on deposit is another story. The ECB has been aggressively buying Italian bonds and pushing the money into banks there.  Several Italian banks remain on life support.

Oddly, the interbank run on Italian banks, appeared to subside in 2014, once QE and NIRP were instituted. Even before the obvious injection of funds in March via the LTRO, Interbank deposits in Italy had been rising for 2 years. 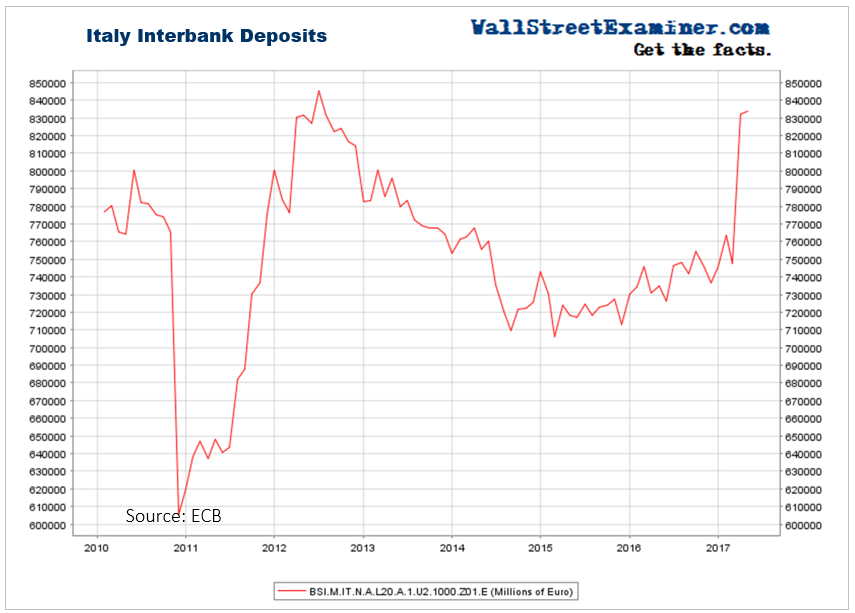 Apparently this illusion was a result of Italian government sponsored interbank collusion. Because when we remove domestic Italian banks from this data series, here’s the result. It’s a chart of deposits of non-Italian bank deposits in Italian banks. Apparently, Italian banks don’t have many fans from outside of Italy. 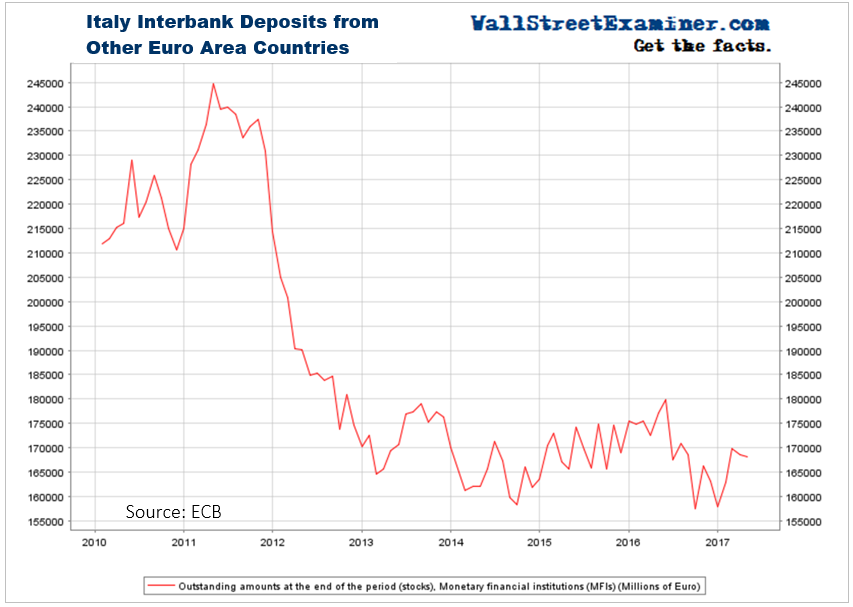 So the Italian games have worked on the surface of the data, but dig down and you see the vote of no confidence there.

There are no surprises in the data of the other European basket cases. There are accidents waiting to happen in these countries as well. Banco Popular was the first domino. Where will the next one to fall be?

Spain again? Spain’s ongoing disaster resumed in April. Deposits fell by 0.8% and have lost 3.3% year over year. €500 billion in Spanish deposits, more than 20% of the peak deposit total in 2012, have disappeared. They got only a minor boost from the TLTRO in March. 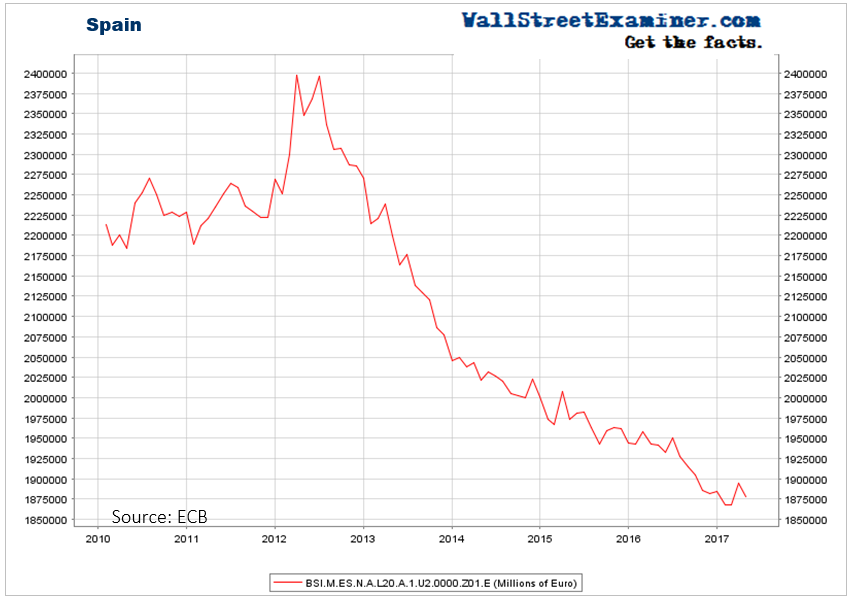 Ireland is small potatoes, but is still getting mashed. Deposits have stabilized since May of 2016. But there’s no sign of recovery. Ireland has lost more than half its deposit base since 2010. Might the deposit famine trigger a run there? 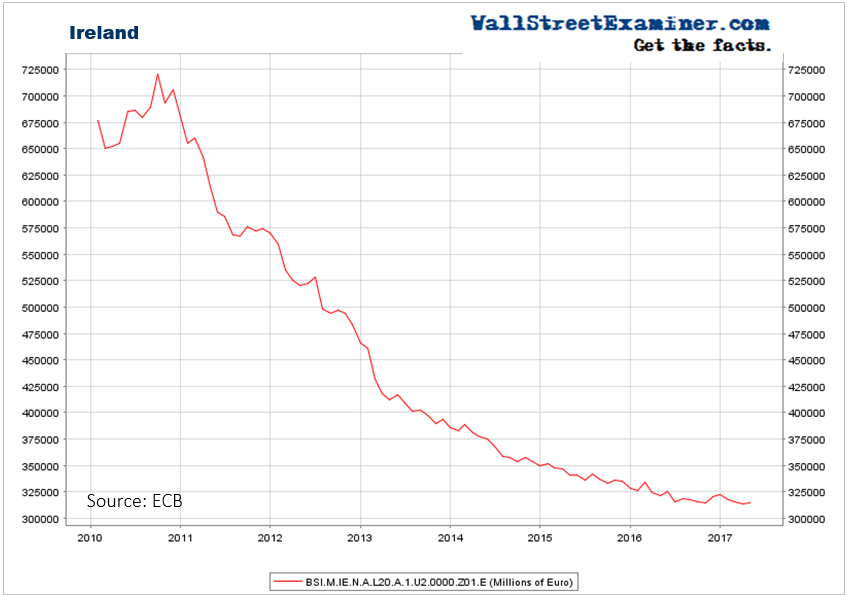 Deposits in troubled Portugal have rebounded slightly after the country lost 20% of its deposits between 2012 and 2016. But deposits downticked slightly in April. I’ve heard talk of a financial miracle turnaround in poor Portugal. I’m not a believer. 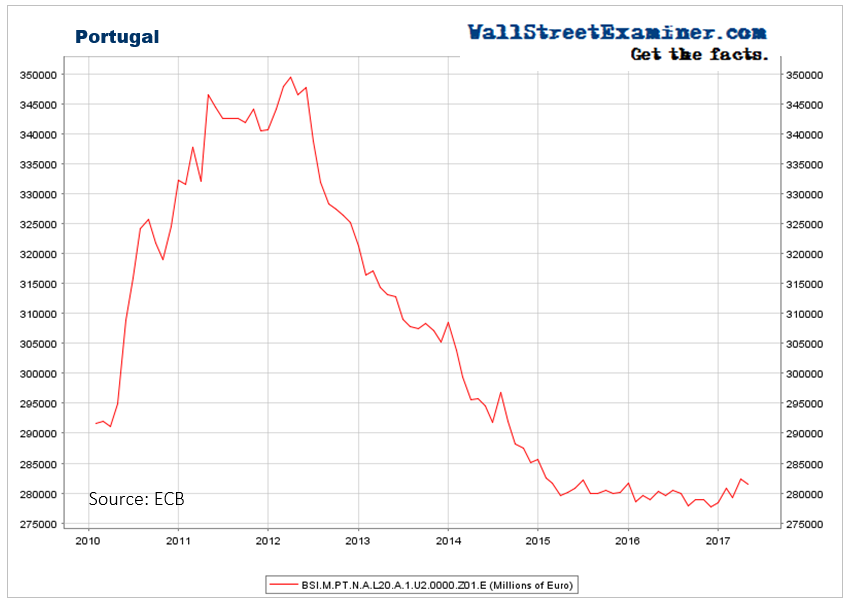 Finally, there is Greece. Greek banks continue to steadily lose deposits.  This is a symbol of the insoluble problems in the European system.  ECB scams have papered over some of them in the rest of Europe. Greece is dire reality. It’s a broken country in a broken banking system.  A shrinking economy with a shrinking population can never repay its debts.

This is true of Europe as a whole. There may or may not be enough economic growth in France and Germany to keep their banks from collapsing. Spain’s economic recovery was reportedly accelerating. But the Spanish banking system hasn’t shown it, and the confidence game has broken down there. Reality has raised its ugly head.

Does the ECB have another rabbit to pull out of its had to stop this from spreading? If it doesn’t, then the endgame is upon us.