… China’s dramatic debt issuance binge is about to hit a brick wall.

According to MarketNews, Chinese bank loan growth is expected to slow sharply in April compared with March as the pillar of bank lending, mortgage loans, slowed as the property market cooled. Citing bank officials, the news service said that robust first-quarter lending almost depleted their resources, making it difficult to find good targets to lend to, which also hurt loan growth.

It also means that suddenly the credit impulse that drove both Chinese and global growth for the past two months is about to evaporate.

How big is the drop?  Sources familiar with the loan number told MNI that combined new loans in April by the Big Four state-owned banks were more than halved from March’s level.  As a reminder, the Big Four banks lent out CNY402 billion in March, according to the People’s Bank of China.

While there is no preview of how bit (or small) the combined TSF number will be, it is safe to assume it will be a far smaller total than the CNY2.34 trillion in total social financing that flooded the Chinese economy in March.

The slowdown mainly came from moderating mortgage growth, which has been the key driving force behind loan growth so far this year. In the city of Shanghai, mortgage loans hit a record high of CNY36.1 billion in March, beating the previous record of CNY34.6 billion set in January, according to PBOC data.

The PBOC said the country’s total outstanding mortgage loan was up 25.5% y/y at the end of March, much faster than the 14.7% of average outstanding loan growth.

But that mortgage strength in the first quarter failed to continue into April as property sales growth slowed sharply on government tightening measures. According to Essence Securities, new residential house sales in tier one cities, namely Beijing, Shanghai, Guangzhou and Shenzhen, fell 21.2% on month in April and only edged up 0.5% from a year ago, including a 38.6% m/m and 30.8% y/y plunge in the city of Shenzhen, which leads the current round of property rebound.

But if April was bad, May was a disaster: “it appears the situation is even worse into May. Shenzhen saw house sales in the first week of May plummet another 49% when compared with the previous week, dragging year-to-date sales into a 1% drop in terms of floor space.”

The reason is that after Beijing saw that housing bubble it had created, it rushed to cool it, and in the process unleashed the “rebar” and other commodity bubble that hit Chinese markets in mid-April, and which has since burst in what may have been the fastest boom-to-bust cycle yet for China.

With property sales growth decelerating further into May and Beijing’s renewed efforts to push for deleveraging, officials warned bank loans are unlikely to pick up in the following months.

“Strong Q1 loan growth probably has used up banks reserve of good clients, namely property and local government financing vehicles, which have high returns and low default risk. So from now on, banks will get more selective and focus on risk prevention,” said an official running a wealth management product business, the main channel for banks’ off-balance lending, at a Chinese second tier bank.

Back in January, when Chinese banks lent out a record amount of loans, the joke in the market was that some banks had finished half their year’s work in just a month. That joke may seem sour now to bank officials. At the end, the only ones laughing will be those who are betting that China’s soaring non-performling loans – of which China has created at least several hundred billion already in 2016 – will come crashing down on China’s financial system forcing a major devaluation, but until then we get to watch how China’s Q1 credit bang becomes a whimper.

GF Securities said in a note to clients that they only expect about CNY600 billion new loans in April and that total social financing is also expected to fall sharply as a result of a drop in corporate bond issuance.

The slower loan growth, if confirmed, provides another piece of evidence, after disappointing trade numbers and purchasing managers indexes, both government and private, that Chinese economic growth slowed again in April after a temporary rebound in March.

As even MNI cautions, the upbeat economic indicators for March were in large part a result of weak bases of comparison in the same month last year, rather than a broad-based improvement in the economy. The recovery has been driven by the property market and the knock-on effects on steel output and construction activity. If markets were too pessimistic about the Chinese economy at the beginning of the year, they may have become overly optimistic based on March data and the stabilization in Q1 GDP.

The next logical question is how long until the massive credit impulse finally fades to which none other than Goldman provides the answer:

“we find a statistically significant response to the credit impulse, with a credit impulse of 5% of GDP boosting annualized real GDP growth by nearly 1.5% the following quarter” 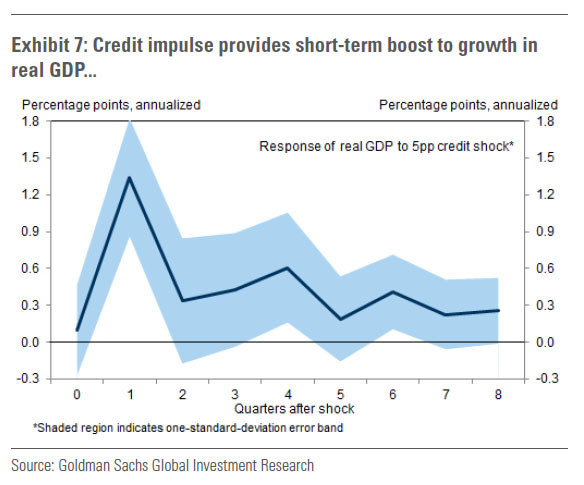 The following quarter, in this case is Q2, which is now halfway over. What happens next is not just a tapering in the impulse but an actual reversal in the benefit from the credit surge. That will kick in some time around late June, early July just in time for the big summer swoon. Recall China devalued for the first time last August – chances are very good that it will do the same again this year.

Putting it all together, China finds itself between a rock and a hard place – should it unleash another massive credit impulse, it will find itself scrambling to contain the NPL fallout; should it taper the credit growth, it will see its economy suddenly swoon lower, resulting in even more currency devaluation and even more capital outflows (and even higher Vancouver real estate prices).

As for the conclusion, we will give the stage to Axiom’s Gordon Johnson who lays it out as follows:

Point 1 – Avg. Daily Futures Trading Values Are Plummeting. In our note published 4/29, titled “MACRO: IS EVERYONE WRONG ON THE “CAUSATION” OF THE COMMODITY BUBBLE?”, we presaged that excessive speculation in the commodities futures markets by Chinese banks’ special interest vehicles (“SIVs”), via wealth management products (“WMPs”), was imminently coming to an abrupt end. The evidence? Simply put, as shown here, here, andhere, after seeing futures trading volumes across virtually every commodity in China increase exponentially over a very short period of time, the Chinese government stepped in two weeks ago and began raising margin requirements, shortening trading hours, and increasing transaction costs for commodity futures trading. Consequently, given the average holding period for futures contracts including rebar and iron ore was less than 3 hours in April, we argue that the Chinese banks responsible for perpetuating this bubble – given the sheer size, we feel those purporting that “retail” investors are driving this are misinformed – are transacting in the overnight market. As such, as we warned prior, with Chinese government policy now staunchly against the ability to profit from speculative trading in the commodities futures market (link), we believe the collapse that has defined a number of commodity metals  will intensify over the coming days/weeks .

Point 3 – Chinese Imports from Hong Kong “Take Flight”. Imports from Hong Kong – a channel used by foreign subsidiaries in China to get capital out of the country by over-invoicing [or, for all intents and purposes, the creation of fake trade invoices] their China-based holding companies – swelled a record 203.5% in April. Stated differently, when taken in conjunction with the 6th consecutive fall in China’s currency adjusted FX reserves in April, we believe a “mountainous” amount of capital continues to be pulled out of China.

Conclusion. We believe the benefit of a record $1 trillion in new credit creation in China’s economy in C1Q16 has run its course. Thus, with policy in China now re-focused on supply-side reform, vs. investment expansion, we see the commodity stocks as shorts again.

So for all those who thought China had been fixed and is no longer a macro concern, we have bad news: the bull – or in this case bear – in the proverbial China store is about to make another grand, if not so dignified, entrance.

Source: The Biggest Source of Global Growth in 2016 is About to Hit a Brick Wall – ZeroHedge