Greece’s creditor powers have delayed talks over reducing the country’s debt mountain for fear of emboldening anti-austerity forces in the southern Mediterranean, its finance minister has claimed.

Euclid Tsakalotos said EU lenders would not discuss the question of Greece’s debt burden, which stands at 200pc of GDP, until after the Spanish elections are held in the new year.

“The promise was that we would have a discussion on debt immediately after the first [bail-out] review and have deal before Christmas,” he told an audience at the London School of Economics on Tuesday night.

“But we won’t have a deal because Spain has an election and [creditors] don’t want … to encourage the wrong people.”

Spain is due to hold its first post-crisis elections on December 20. The current conservative government of prime minister Mariano Rajoy has been fighting off anti-austerity forces in the opposition Socialist party and the grassroots Podemos movement, in a bid to become the first bail-out government to ever be re-elected in the eurozone. 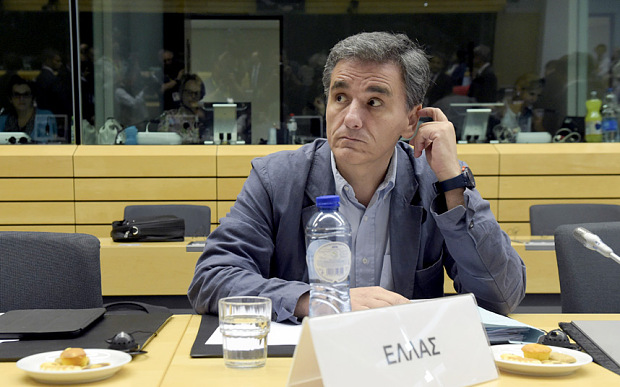 Wiping out some portion of Greece’s debt mountain has been a key demand of the Syriza government. Athens had been told talks could begin when the government had successfully passed its first round of laws in return for a release of bail-out cash. This review is due to be complete in the coming weeks but has hit stumbling blocks.

And Mr Tsakalotos, an Oxford-educated economist, hinted at the continuing tensions between the newly elected government and its lenders.

He said many of Syriza’s negotiators “had wanted the Left to fail” in order to make an example of the country, and dissuade radical forces from similar demands to tear up austerity deals in Portugal and Spain.

The International Monetary Fund has called for a bold programme of debt write-offs and moratoriums on repayments for up to 40 years. The Fund has refused to take part in a new €86bn bail-out until a debt write-off has been agreed.

EU creditors, however have resisted opening up the question of haircuts or repayment extensions until Athens has managed to “front-load” most of its austerity reforms. Mr Tsakalotos’s comments suggest creditors fear they will unleash a new wave of debt relief calls in former bail-out countries.

Chief among them is Portugal, which is set to join Greece as Europe’s second left-wing regime after its conservative government collapsed after just 11 days on Tuesday. The country’s radical Left Bloc and Communists have called for a mass debt restructuring of its near 280pc debt mountain.

• Portugal on collision course with EU as centre-Right falls

The Syriza finance minister also admitted the Leftist government had been “naive” in its early negotiating tactics with its paymasters.

“We were a very green government and we didn’t have enough people who could engage in arguments.

“We felt always outnumbered and always outgunned even at this technocratic level.”

He was appointed in the role in July after his firebrand predecessor, Yanis Varoufakis, resigned over his disagreement to the signing up of a new “Memorandum” in July.