The Bull Market Will End When The Fed and Friends Decide, Then We Get To Pay For Their Madness

We all know the market is rigged. We may not like it, but facts is facts. The world’s largest central banks have thoroughly rigged the game. They figured out they could do it and they have made QE an instrument of market manipulation, particularly stock market manipulation, since 2009. On the surface, the idea was to promote “Trickle Down.” Only it doesn’t work. The trickle pools at the top.

Eventually the lack of trickle forms a bulging bubble and display of wealth disparity becomes so great that even central bankers, who are difficult to shame, become embarrassed enough to stop pumping it to even greater extremes. Only, when you prick a bubble, it doesn’t just gradually drain out. It explodes like the goo spewed on a mirror from a giant pustulous teenaged facial boil when squeezed.

Bears are fond of the idea that market rigging works until it doesn’t, that somehow, things just become so extreme that the stock market and economy just spontaneously combust, but sadly, in economic matters, there is no justice. There is no restitution or retribution. There is only power.

Power corrupts, and the corrupt exercise power to their own ends. That principle drives this bull market. It’s about the aggregation of wealth in the hands of the corrupt and powerful. And there are none so corrupt, or more powerful, than central bankers. They are the minions of the puppet masters. We are the puppets, dancing as they pull the strings.

So if you think that this patently manipulated bull market will just suddenly and spontaneously end, and that the manipulators will suddenly get their due, please disavow yourself of that quaint notion. Yes, prisoners will be taken when the end comes, but those who are in power will remain in power. A few will retire, as Robert Rubin, Larry Summers, Timothy Geithner, Alan Greenspan, and Ben Bernanke once did. But as always, a new class of manipulative power mongers and their sycophants waits in the wings to take their places.

If you don’t think that the Fed is the cause of bear markets as well as bull markets, you are kidding yourself. Markets don’t spontaneously combust. They fall when the Fed decides. And the Fed has decided. Normally in such cases we’d expect that the market would top out and begin to fall within the next 12 months. The timetable is not “data dependant,” as the current mastermind, Mrs. Akerloff, says. The decision has been made. They’re shutting this down, data be damned.

However, there are two wild cards this time. The Fed has two partners in the market manipulation business. The BoJ and ECB both are manning the pumps into the same liquidity pool. The BoJ apparently intends to keep pumping after the Fed stops. The ECB is threatening to start pumping, although it’s debatable whether its rules would permit the outright securities purchases that so directly impact the markets. So we don’t know yet how these wild cards will impact things. We must continue to watch their actions closely.

As for crashes, it’s arguable that the Fed would want a crash but crashes occur because the Fed cannot control the unwinding of the bubble. Crashes are a side effect of that. The Fed is aware of the risk, but it accepts it, believing that it can reverse the course of things when the time comes. Perhaps the next time the time comes it will be too late, because this time they have gone too far.

Let’s look at the evidence showing that the market tops out when the Fed decides and not by some accident of fate.

The Fed has posted historical time series data on its balance sheet on the web since 2002. I have been tracking it every week, and even every day on the NY Fed’s daily operations pages, ever since. So I’ve managed to accumulate some familiarity with the details of the Fed’s operations and their direct and indirect impacts on the markets. It’s a matter of careful observation. As the great scientist philosopher, Professor Lawrence Berra, said, “You can observe a lot by watching.”  There’s no rocket science involved. These are processes that unfold slowly before our very eyes. The answers are there for those who bother to watch carefully.

Below is a graph of the Fed’s balance sheet from 2002 to 2008 showing that the stock market topped out in 2007 when the Fed pulled the plug on balance sheet growth. It then became even more aggressive when it drained its System Open Market Account in 2008 while funding non traditional direct loan programs, but keeping the overall assets level. That draining of the SOMA crippled the Primary Dealers and the markets spiraled out of control until the Fed reversed course. There was clear cause and effect between the Fed’s actions and the 2007-09 bear market.

The weekly data for 1996-2002 is also available. Make no mistake. The Fed also triggered the 2000-2003 bear market. After watching the internet and technology bubble spiral out of control in late 1999 and early 2000, the Fed decided that enough was enough and pulled the punchbowl in 2000, halting its balance sheet growth altogether for 9 months in the year 2000. It started growing its assets modestly in 2001 and after, but it was too little to have any market impact as it added less than $5 billion per month. The pendulum had swung and the Fed was content to allow it to run its course. The markets would turn when the selling had exhausted itself in 2003. 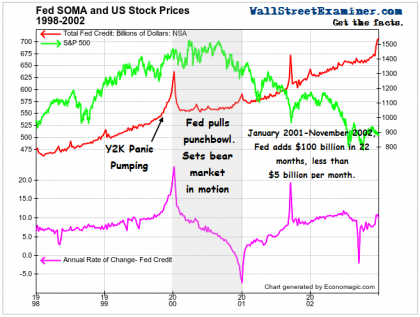 From 2003 through 2006, the Fed expanded its balance sheet by $150 billion at a fairly steady rate of $3.125 billion per month. Contrast that to $100 billion plus per month under the various incarnations of QE in recent years. Miracle of miracles, from 2003 to 2007, the stock market recovered on its own, as if by magic, without heavy handed Fed intervention. But in 2007, the Fed again pulled the punchbowl, and it blundered in 2008 when it shrank the System Open Market Account and starved the Primary Dealers of cash when they needed it most, rendering them unable to make and maintain orderly markets.

The Fed could have restored order to the markets simply by restoring that cash it had drained from the dealers as it did under QE1. It then could have stepped aside and let the markets and US economy go through the natural cyclical process of healing as they always had done unfailingly in the past. This time the manipulators had a technological revolution in energy production at their backs, but have never acknowledged its impact. Instead, the Fed and its sycophants have undeservedly given all the credit for recovery to Bernanke, with the megalomaniac himself leading the chorus. They are wrong, but we must await the slowly unfolding judgment of history to show that.

Since  2007, with the madman Bernanke in charge, we’ve seen not one but three massive expansions of the Fed’s balance sheet. Making matters worse, the ECB and BoJ mimicked Bernanke, creating monstrous imbalances throughout the world. Their universal solution to the problem of too much bad debt was to extend and pretend, adding more and more debt to the towering inferno of debt that was the problem in the first place. There will be a price for this madness, and we will all learn first hand what that will be, in due time.