While most sellside “research” has traditionally been complete garbage, either meant to boost soft dollar revenues and build client goodwill by giving one-on-one “expert network” meetings with management, or a macro echo chamber of equity strategists all of whom are terrified to stray from the penguin, or is it lemming, flock (its only utility is to give insight into whatever the prevailing groupthink consensus is, allowing an easy opportunity to fade it) and desperate to be as optimistic as possible (there is little upside on Wall Street to be a pessimist or a realist) there are the occasional voices of profoundly insightful, “variant perception” views from within the big banks, almost exclusively from the credit, and rarely if ever equity, division. Names such as BofA’s Michael Hartnett, DB’s Jim Reid and Dominic Konstam, and of course, Citigroup’s Matt King.

What makes these analysts unique is that they tell the truth as they see it, unpleasant as it may be (some reading between the lines may be required) even if it means breaching protocol and launching internal scandals over “client communication objectives.” Two weeks ago, Dominic Konstam predicted, accurately, that the Fed’s rate hike will be tantamount to policy error (as we showed by the market’s response on Thursday and Friday). Then, taking it a step further, last Thursday we showed Hartnett’s presentation how the Fed’s rate hike has unleashed the next bear market.

Now, it’s Matt King’s turn, to explain wny the “risk is that central banks have now created a monster such that markets drive the economy, if not on the way up, then certainly on the way down.”

The broader narrative – in which central bank liquidity has pushed up asset prices without fostering a similar improvement in the underlying economy – is one we find the vast majority of [fixed income] investors are sympathetic to. The only question is on the timing: no one wants to get out too early.

This is one of the reasons we find the outlook for next year so difficult, and why there is so little agreement about it (even internally at Citi, never mind across the street). It depends less on fundamentals, and more on second-guessing what everyone else will do. Of course, markets are always to some extent like that, but self-reinforcing processes seem to have grown in importance in recent years. Rather than the economy driving markets, as is supposed to be the case, the risk is that central banks have now created a monster such that markets drive the economy, if not on the way up, then certainly on the way down.

Suppose, for example, that all does not go according to plan, and that the current squeeze higher in markets fades and even reverses. Perhaps oil price and EM weakness prove persistent, markets and the developed economies continue to prove more susceptible to these than they “ought” to, inflation breakevens fall, spreads widen and equities suffer even in the face of continuing share buybacks and record M&A. The scenario is far from unthinkable: indeed, it would simply be a continuation of everything we’ve seen in the past six months.

What we find really alarming in such a scenario is not only that the safety net might be a while in coming, but that we are increasingly doubtful of how much support it would provide, at least initially. Clearly the threshold for the Fed to reverse its hike, let alone do more QE or move to negative rates, is very high. And while the ECB should eventually do more, the bar to Draghi being able to spur the rest of the Governing Council to arms would now seem to have been raised. 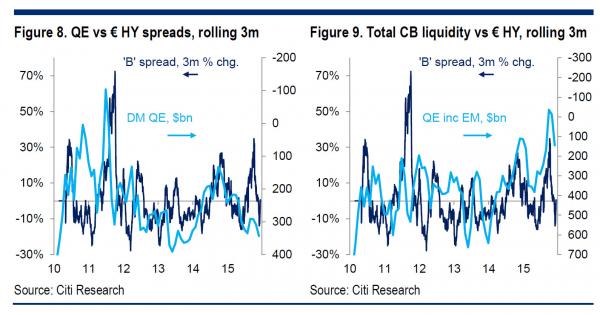 Worse, though, the broad market reaction to central bank stimulus seems to be waning. In credit, and in Europe, this is not too bad. We do still think negative rates and QE retain a positive effect, even if it seems to be driving almost as much money into US fixed income as into European credit and equities. We are still divided on whether the right metric to plot against spread changes is just DM QE (in which case spreads ought to rally more, Figure 8), or total central bank liquidity including EMFX reserve changes (in which case spreads are much too tight, Figure 9). 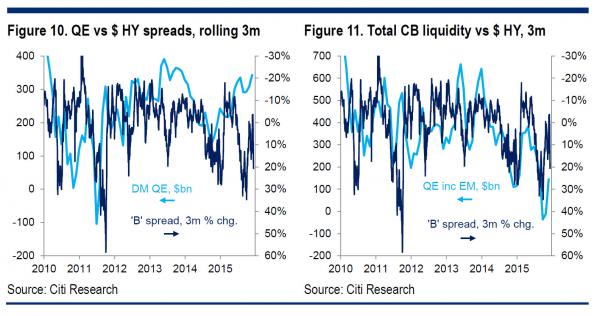 The further away from the liquidity we look, the more precarious the picture becomes. In the US, and in equities, the fit excluding EM (Figure 10) is clearly less good than when it is included (Figure 11). 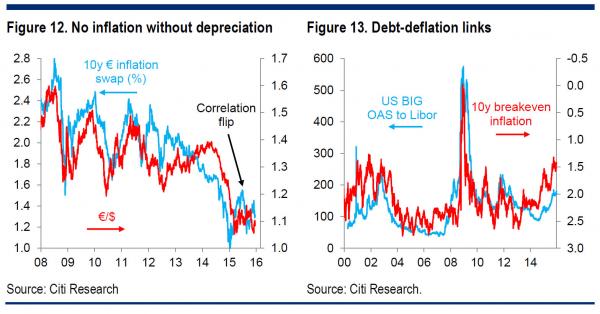 Unfortunately for us in credit, this really seems to matter: there is a longstanding relationship between credit spreads and inflation expectations (Figure 13). Some of this will be the normal ebb and flow of the economic cycle, but it seems to go deeper than that. Most likely it is related to the process of credit creation4 and its stimulative effect in investment and growth. Spreads in $ and especially in € are tight relative to inflation expectations, presumably as yet another consequence of investors ignoring fundamental relationships and reaching for yield.

Like the Fed, then, we end up hoping their models are right – that consumer and services do finally respond to lower oil prices, that normal multipliers do kick in, that markets are able to shrug off EM and energy sector weakness, and that investors respond to this year’s disappointing returns not by licking their wounds, looking at higher $ deposit rates and resolving to save more, but by recognizing the improvement in value and doubling up.

We only wish we had as much confidence as Ms Yellen…. The financial system may be less levered, but that does not necessarily make it less fragile. With rate hikes as with mutual fund closures (and as with affairs), it is not necessarily the first one which makes people panic and rush for the exits. But nor is each successive one likely to be a help.

Source: Matt King: “The Risk is That Central Banks Created a Monster that Drives the Economy on the Way Down” – ZeroHedge