Last Thursday, in a speech delivered at the University of Utah, Mitt Romney blindsided Donald Trump in what amounted to a scathing indictment of the billionaire’s ability to lead the country.

“If we Republicans choose Donald Trump as our nominee, the prospects for a safe and prosperous future are greatly diminished,” Romney said, in an apparent effort to play party elder. “If Donald Trump’s plans were ever implemented, the country would sink into prolonged recession,” Romney continues, hitting Trump on the economy. “A few examples. His proposed 35 percent tariff-like penalties would instigate a trade war and that would raise prices for consumers, kill our export jobs and lead entrepreneurs and businesses of all stripes to flee America.”

We covered the story exhaustively, and for those who would enjoy a review of the verbal melee, see here, here, and here.

More important than what Romney said (after all, it’s not as though he’s the first person to essentially call Trump a demagogic lunatic who has no business being President) was what his speech represented: all-out panic on the part of the GOP establishment.

This is it folks. Trump is on the verge of winning the nomination and although most still think he can’t beat Hillary, the national election is a wildcard. If Trump can go from laughingstock to presumed GOP nominee in nine months, there’s no reason to think he can’t ride the populist wave all the way to The White House.

With diplomats the world over voicing their concern, and with America’s reputation on the line (of course we can debate about what’s left of that reputation after Bush and Obama) heavyweights from across America’s political aristocracy and business community are scrambling to figure out how to derail Trump’s momentum. In short, the Michael Bloomberg deus ex machina isn’t coming and Joe Biden isn’t likely to ride into the race in a red Camaro and save the day either, so what now?

That question, apparently, was on the agenda at the American Enterprise Institute’s annual World Forum, a secretive affair held on Sea Island, Georgia. 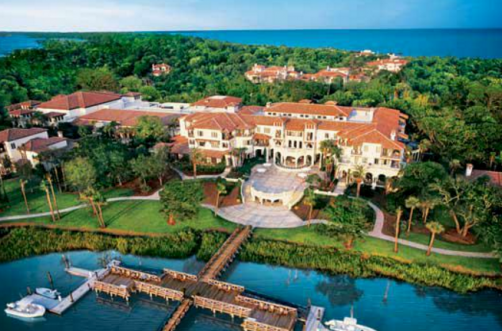 “The main topic at the closed-to-the-press confab? How to stop Republican front-runner Donald Trump,” Huff Post writes. Here’s a list of attendees:

“A specter was haunting the World Forum–the specter of Donald Trump,” the Weekly Standard founder Bill Kristol wrote in an emailed report from the conference, borrowing the opening lines of the Communist Manifesto. “There was much unhappiness about his emergence, a good deal of talk, some of it insightful and thoughtful, about why he’s done so well, and many expressions of hope that he would be defeated.”

Heading to AEI World Forum. Lots of interesting guests. It’s off the record, so please do consider my tweets from there off the record!

Predictably Karl Rove, GOP mastermind, gave a presentation outlining what he says are Trump’s weaknesses. Voters would have a hard time seeing him as “presidential,” Rove said. Which we suppose is why they are turning out in droves to vote for him.

In any event, this underscores how serious the situation is. America is apparently facing an identity crisis wherein the country’s elected representatives as well as the business community feel a sense of paternalistic duty to keep the public from making “a mistake” at the ballot box.

But they don’t seem to understand that that plays right into Trump’s hands.

It’s “the establishment” trying to bend the will of the electorate.

It’s “entrenched business interests” aligning with bought-and-paid-for politicians to stand in the way of a populist revolution.

Now, he can say that a billionaire who refuses to unlock an iPhone to aid in the fight against terrorism on American soil, the House Speaker, Elon Musk, and none other than Karl Rove himself are secretly commiserating on an island at a lavish, neocon-hosted conference to stop America from exercising their right to choose the next President!

It would be difficult to craft a better narrative to tell working class Americans if you tried.

Long story short, if the establishment and the business community keep focusing on how to subvert democracy rather than on how to craft a message that resonates with voters, they are going to end up handing the keys to The White House to Trump on a silver platter.

Which we suppose is just how he likes to be handed his keys.

Only the platter would preferably be gold.