Buried deep in the data tables of the BLS’s Producer Price Index (PPI) for May is an item that reveals the long running fallacies of the CPI and the Fed’s favorite inflation fantasy, the BEA’s Personal Consumption Expenditure price index (PCE). The revealing item is the PPI for finished consumer goods. It represents the price changes that retailers pay for their finished goods inventory. It has persistently outrun the widely followed CPI and the Fed’s favorite PCE by a wide margin ever since inflation began to rebound in 2010 from the pits of the recession in 2009.

For either the CPI or PPI to be believable in light of this data, it would be necessary to believe that retailers never pass along their persistently increasing costs to consumers. That’s unbelievable on its face.

We can look at how the BLS constructs CPI so that it persistently understates actual inflation. The BLS manipulates CPI lower by overweighting housing to approximately 40% of Core CPI, then by grossly undercounting housing inflation. A variety of sources, such as the NAR, Corelogic, Redfin, FHFA, and even the widely followed, massively flawed Case Shiller, have reported that housing inflation has been running at roughly 6% for the past couple of years. It was even higher than that in the initial rebound from the 2011 low. But these increases were not included in the official “inflation” measures.

The BLS eliminated house prices from the CPI in 1982, substituting a manufactured number called owner’s equivalent rent (OER). Without going into the details of how that number is conjured up, which I have covered in the past, it has been imputed at 2.5%-3% in recent years. Because of the BLS’s refusal to recognize housing inflation, replacing it with a number that understates the actual rate, the CPI has persistently understated overall inflation. CPI is a tortured index whose purpose has always been to index government payments to keep the annual increase in social security, salary, and government contract payments to a minimum. It was never intended to represent actual inflation. This is a fact that economists and the mainstream media seem to have missed or purposely ignored.

The PPI for finished consumer goods suffers from no such manipulation. However, it is not a perfect indicator of overall inflation since it includes only finished goods, and neither housing nor services. But it is a far more realistic representation of actual inflation than CPI. Comparing CPI with the PPI for finished consumer goods, CPI has understated inflation by an average of at least 0.8 percentage points per year for the past 6 years. That’s enough to show “inflation” below the Fed’s 2% target for the entire period. 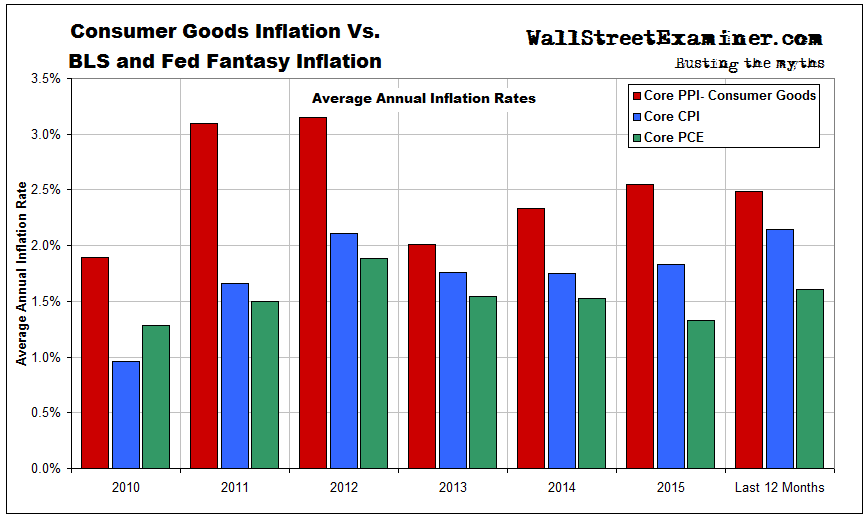 The Fed has gone a step further by favoring the PCE as its preferred measure of inflation. This index goes to even greater extremes to underweight those goods and services that are inflating the fastest, resulting in average annual inflation rates that are even below the BLS’s fictitious CPI inflation.

The PCE has understated actual inflation by an average of at least a full percentage point for the past 6 years. I say “at least” because the PPI for finished consumer goods does not measure housing inflation. If 6% housing inflation were includedin this measure at the 40% weighting that OER gets in Core CPI, then the current inflation rate is actually 3.9%, not the 1.6% reflected in the PCE.