The Daily Data Dive: How Industrial Production Exposes the Manipulation and Misrepresentation In Other Government Data

If the US economy is growing, then why are industrial production and electric power generation both on downward paths?

The Fed’s Industrial Production Indexes are always interesting because they measure units of production. There’s no price inflation in the data, therefore no need to adjust for it using the government’s questionable inflation data. The Industrial Production (IP) data shows the actual volume of units of production for the US’s mines, factories, and utilities, both as a whole, and by individual industries.

While the IP data doesn’t measure services industries directly, the nation’s utilities serve not only other industrial users, but also all service industries and virtually all households in the US. Unless you’re “off the grid,” you’re a consumer of the energy US utilities are producing. So total electric power generation and distribution is a pretty good proxy for the US economy.

Using actual, not seasonally manipulated data, we can visualize both the economy’s longer term growth on a year to year basis as well as short term changes by comparing the annual growth rates for different months versus the same month last year. On both scores, total industrial production doesn’t look so hot. 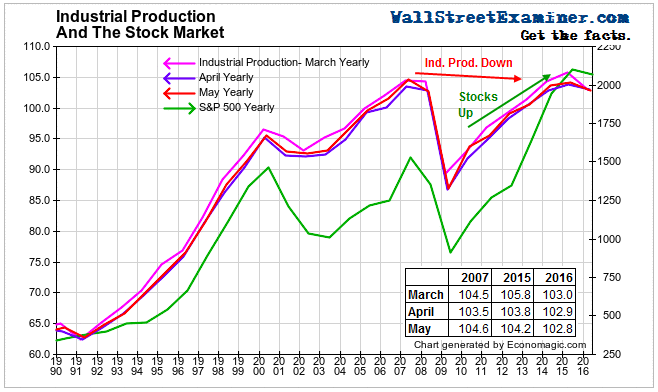 Not only was industrial production down 1.3% year to year in May, it continued a string of 5 straight months where IP was down including the 3 months on this chart, plus January and February. The last 3 months had their highs in 2015. March and April both edged out the 2007 highs. May 2015 fell short of the May 2007 high. That makes this the second straight year that May IP failed to break the 2007 high. This is beginning to look like an economy that has stalled at a permanently low plateau.

This chart also includes the S&P 500 as of June 17 each year. While IP has been struggling to get past the 2007 peak, the stock market sailed past its 2007 highs in 2013 and continued its run through 2015. That was the power of the Fed’s money printing in action. The leveraged speculators got payday after payday. The rest of the US economy… not so much.

Note that after the slight slowing of March-April-May 2007 to 2008, the financial markets and the US economy collapsed. The same thing does not have to happen in exactly the same way. But the setup is remarkably similar today and should not be ignored, especially considering how far stocks have overrun IP on this cycle.

Some may argue that the recent decline in IP was due to the collapse in energy production. Certainly that has played a role in the drop since 2015. However, non-energy production was also down slightly year to year in May. And while energy production boomed from 2009 to 2014, non energy production essentially stalled after 2012. Non energy IP grew by an average of  0.77% per year since then, and not at all in the last 12 months. Something is clearly wrong with the US economy. 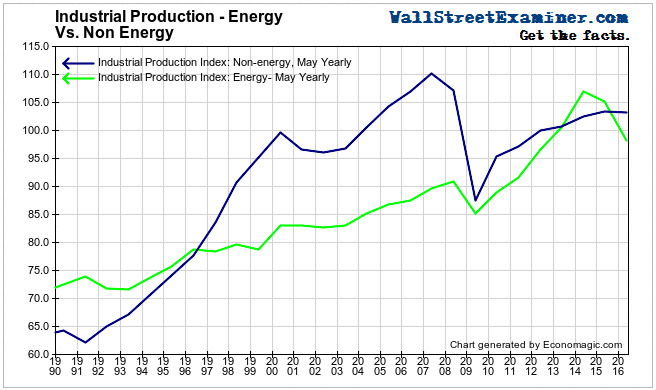 Likewise, we see a trend that has gone essentially nowhere since 2007 in electric power generation and distribution to all of the nation’s businesses and households. Electricity production trended upward steadily from the tech bubble economic and market peak in 2000, through 2007 when the housing bubble began to disintegrate. Since then, electric power production has fluctuated but there has been no growth. May production has been down for two straight years and is about 3% below the 2012 peak. 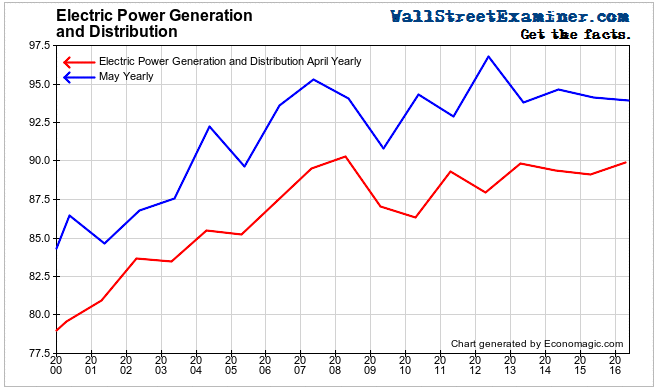 Is that just conservation? Have that many households and businesses gone off the grid? It’s unlikely, especially since US population has grown by 3% since May 2012. That means that there’s been a per capita decline of 6% in electricity consumption between May 2012 and May 2016. It defies common sense to believe that this decline is not at least partly related to an economic slowdown that isn’t showing up in the government’s other data.

Time will tell. BEA statisticians manipulate GDP higher by using an inflation figure as a deflator that grossly understates actual inflation. Likewise, the BLS massaging of the jobs data either overstates or misrepresents the improvement in employment. Eventually the government’s data magicians will run out of illusions.